Tyre Sampson, the 14-year-old who died after falling off the FreeFall drop tower ride at ICON Park in Orlando, Florida, was heavier than the weight restrictions for the attraction, according to information in the operation's manual. Meanwhile, the park itself is now calling for the other rides created by the same company that built the FreeFall ride to shut down each attraction until an investigation can be conducted to confirm the rides are safe.

ORLANDO, Fla. - In what was intended to be a fun visit to an amusement park ride in Orlando, Florida, the day turned tragic for the family of a 14-year-old boy who fell from a towering free-fall ride and died from his injuries.

Tyre Sampson fell on March 24 from the 430-foot ride called Orlando FreeFall, which is taller than the Statue of Liberty, during a visit to ICON Park. Sampson, from Missouri, had traveled to Orlando for a football program with another family.

Located along a busy street in the heart of the city’s tourist district, the Orlando FreeFall is billed as the tallest drop tower in the world, according to FOX 35. It takes passengers to the top, briefly tilts riders forward, and then free-falls some 400 feet at 75 miles per hour. It can accommodate 30 riders when loaded to capacity. 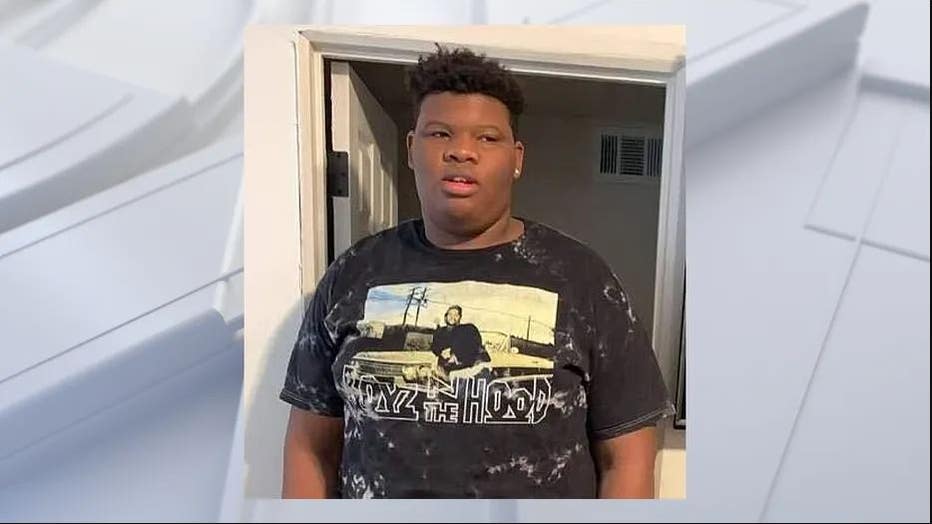 Tyre Sampson, 14, is pictured in a provided family photo.

The ride will remain closed "for the foreseeable future" until all questions are answered as part of the ongoing investigation, said the Florida Commissioner of Agriculture and Consumer Services, which is tasked with inspecting many of the state’s amusement rides.

The operations manual indicated that Sampson exceeded the ride’s weight restrictions. While there is no minimum weight listed, there is a maximum weight restriction of 130 kilograms, which is roughly 286 pounds. Sampson’s dad told FOX 35 that the teenager was 6 feet, 5 inches tall and weighed 340 pounds. 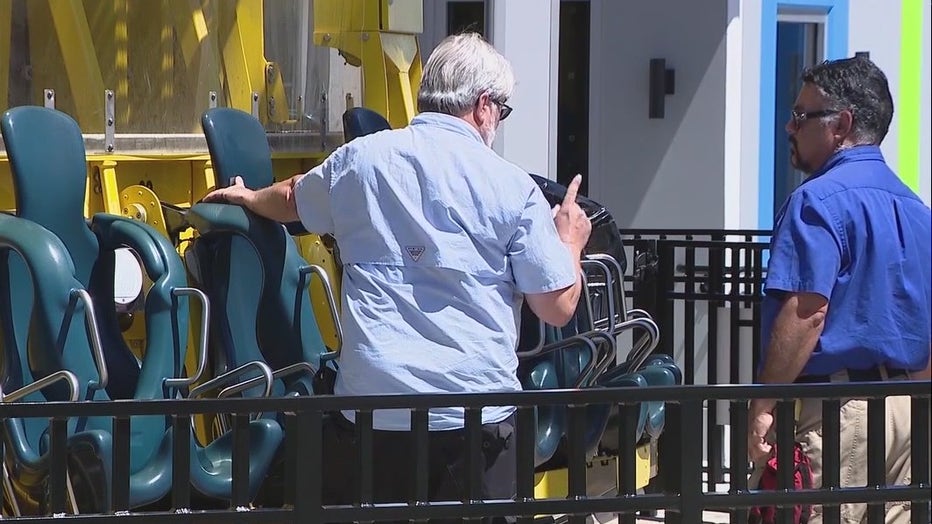 An inspector with the Florida Department of Agriculture and Consumer Affairs, the state agency that oversees the safety of amusement rides, looks over the Orlando Free Fall drop tower ride at Orlando ICON Park. (Credit: FOX 35 Orlando)

RELATED: Father of teen who fell from ride wants answers: 'This should never happen’

The Orlando Free Fall sits adjacent to the Orlando Slingshot. Both attractions, which opened in December 2021, are owned and operated by the Slingshot Group of Companies and manufactured by Funtime Rides from Austria. 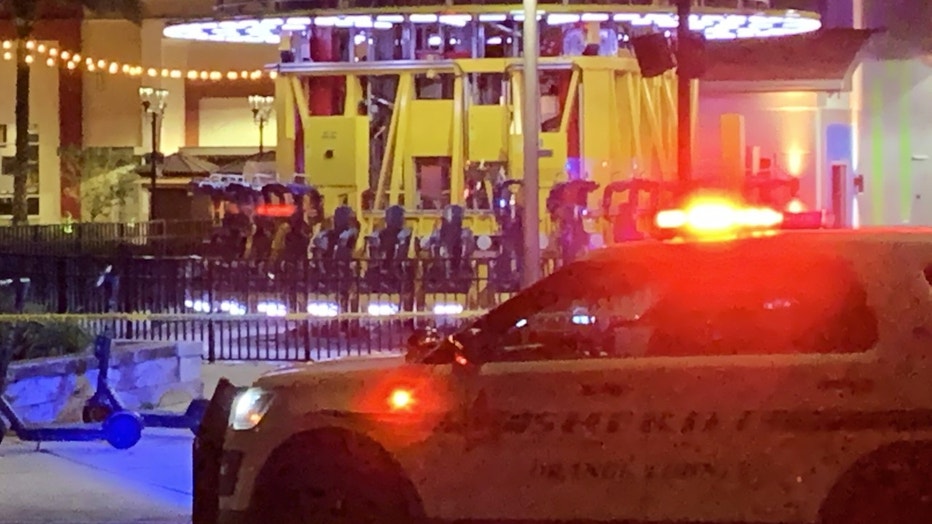 A police vehicle drives past ICON Park following the death of a teenager on March 24, 2022. Credit: FOX 35 Orlando

In response, Dollywood amusement park in Tennessee said days after the incident that it had temporarily closed its Drop Line ride developed by the same manufacturer "out of an abundance of caution."

"Although Dollywood does not have the specific ride involved in this tragic incident, the safety of our guests is our top priority," Dollywood said in an emailed statement on March 27.

Hansa-Park, an amusement park located in Germany with a free fall tower also manufactured by Funtime Rides, said in an emailed statement that it was "deeply struck" by the teen’s death in Florida, adding: "There are no words that can possibly describe [the family’s] loss."

Hansa-Park noted that due to the fact that its Highlander tower attraction is operated according to a different European standard with independent inspections, "we can rule out an incident like the one in Florida."

"The safety system is technically designed in a way to deny the ride’s start unless all safety bars have been closed in a defined minimum position. In our case the position of the safety bar does not allow the distance from seat to backrest to exceed 38 cm," the statement said. In inches, that distance equals roughly 14.9 inches.

RELATED: Fence put up around Orlando drop tower ride where teen fell to his death

As thrill ride enthusiasts know, there are several other drop tower rides operating at major parks across the U.S.

While these attractions are not linked to the incident in Orlando, nor made by the same manufacturer, some parks have issued statements about their individual safety protocols:

Standing at 200 feet, Acrophobia is a free-fall drop tower standing at 200 feet, according to Six Flags Over Georgia. The tower slowly spins riders at a vertical tilt then drops at a speed of 50 miles per hour. The ride was introduced in 2001 and manufactured by Intamin.

"While Acrophobia offers a similar experience, it is not the same ride and is made by a different manufacturer," a Six Flags Over Georgia spokesperson said in an emailed statement. "Acrophobia features a redundant safety restraint system including an over-the-shoulder harness and a seatbelt which connects the restraint to the seat between the legs."

The park added that guest safety is its "top priority."

"Our stringent safety program includes inspections from both internal and external ride experts. All of our rides receive annual maintenance and daily inspections by our trained maintenance professionals," the statement said.

The Power Tower ride features two towers that shoot riders 240 feet into the air and two towers that blast riders back down to earth from the same height — reaching speeds up to 60 miles per hour, according to Cedar Point’s website. The attraction was manufactured by S&S Worldwide.

When asked if Cedar Point had implemented any new safety procedures following the Florida incident, a Cedar Point spokesperson said: "it is not appropriate for us to comment on an incident at another park. Although similar, our ride is not from the same manufacturer."

The park spokesperson also noted that "the safety of our guests and associates remains our highest priority, as always. The ride at Cedar Point will continue to operate."

This Power Tower ride features three towers, with one blue tower sending riders 250 feet into the air and two red towers slowly bringing riders up to the top of the 275-foot tall tower, according to Valleyfair’s website. It was also manufactured by S&S Worldwide.

When asked if the park had implemented any new changes or safety assessments following the Florida incident, a Valleyfair spokesperson similarly noted, "It is not appropriate for us to comment on an incident at another park. Although similar, our ride is not from the same manufacturer." 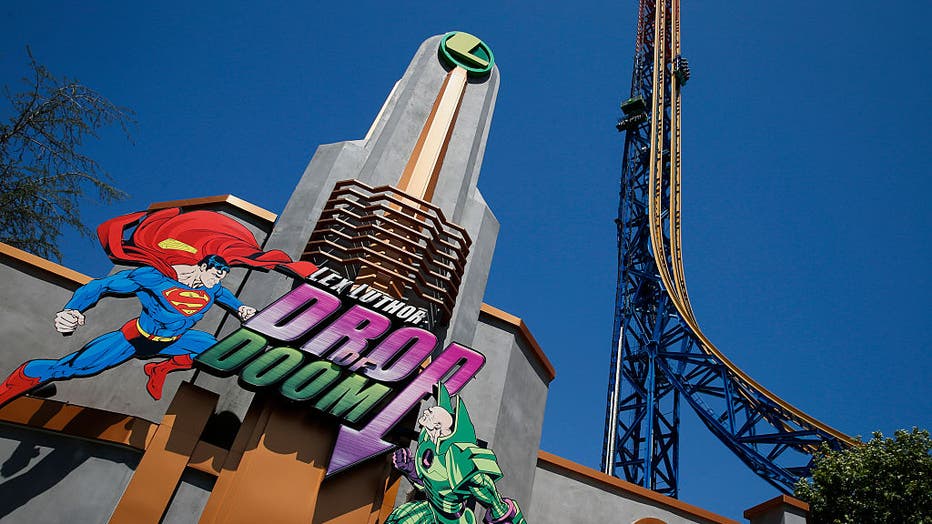 Lex Luthor: Drop of Doom sends riders up 40 stories in the air, reaching 415 feet of elevation. The ride then plummets down to earth at up to 85 miles per hour, according to Six Flags Magic Mountain’s website. The attraction was introduced in 2012 and manufactured by Intamin.

When asked if Six Flags Magic Mountain had implemented any new changes or safety assessments, a spokesperson highlighted how the attraction — made by a different manufacturer than the Orlando ride — has "a redundant safety restraint system including an over-the-shoulder harness and a seatbelt which connects the restraint to the seat between the legs."

"The safety of our guests is our top priority. Our stringent safety program includes inspections from both internal and external ride experts. All of our rides receive annual maintenance and daily inspections by our trained maintenance professionals," the statement continued.

Giant Drop at Six Flags Great America is equivalent to 20 stories and drops riders in a free fall, reaching speeds up to 62 miles per hour, according to its website. The ride was introduced in 1997 and manufactured by Intamin.

In a statement, a Six Flags Great America spokesperson noted the park is not yet operating for the 2022 season and said that while Giant Drop is a drop ride — "it offers a different experience and is made by a different manufacturer."

"Giant Drop features a redundant safety restraint system including an over-the-shoulder harness and a seatbelt which connects the restraint to the seat between the legs," the spokesperson said. "The safety of our guests is our top priority."

The statement added: "Our stringent safety program includes inspections from both internal and external ride experts. All of our rides receive annual maintenance and daily inspections by our trained maintenance professionals." 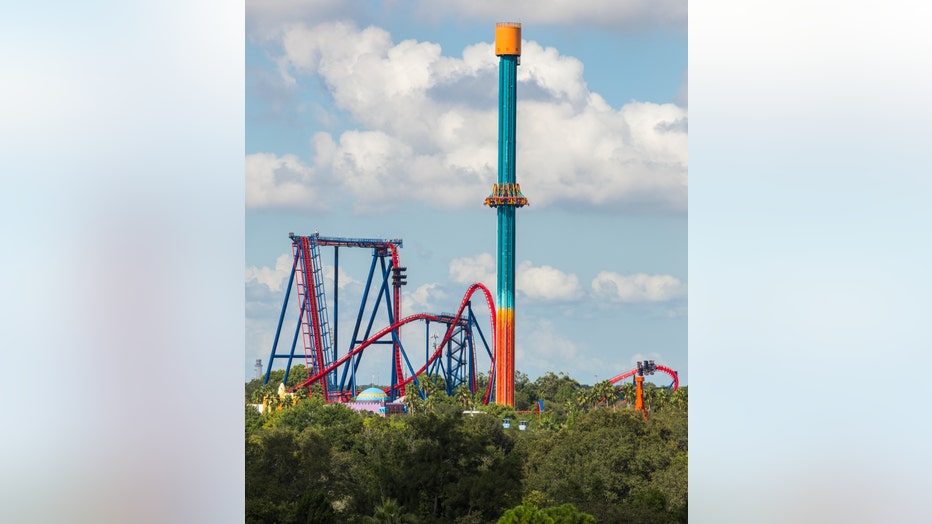 Falcon’s Fury is a 335-foot freestanding drop tower that sends riders plunging 60 miles per hour straight down, according to the Busch Gardens Tampa Bay website. The ride was manufactured by Intamin.

A Busch Gardens spokesperson said in a statement that the drop tower ride had undergone "repeated" daily safety inspections "out of an abundance of caution."

"We extend our deepest sympathies to the family and all those affected by the tragedy. Our drop tower ride provides a different experience and safety system," the statement read. "Out of an abundance of caution, last Friday morning our Maintenance and Operations teams repeated our daily safety inspections prior to opening the ride. Safety is our highest priority."

Mäch Tower lifts up to 30 riders nearly 240 feet above the park and rotates at the top of the tower before dropping guests at heart-pumping speed, according to its website. It was manufactured by Moser's Rides.

SeaWorld Parks & Entertainment, which owns and operates Busch Gardens Williamsburg, did not immediately respond to an email asking about any temporary closures or new safety assessments in response to the Orlando incident.

Universal Orlando Resort, which operates the Islands of Adventure theme park, said in a statement that although its attraction was built by a different manufacturer with a different ride system — it briefly paused the attraction for safety and procedural checks out of an abundance of caution.

"Our attraction was built by a different manufacturer. In addition, our ride has a completely different ride system and a 22-year-safety record," a spokesperson said in an emailed statement. "But last week, we knew our guests would want us to pause while we repeated all our safety and procedural checks. We did so and then put the ride back in operation."