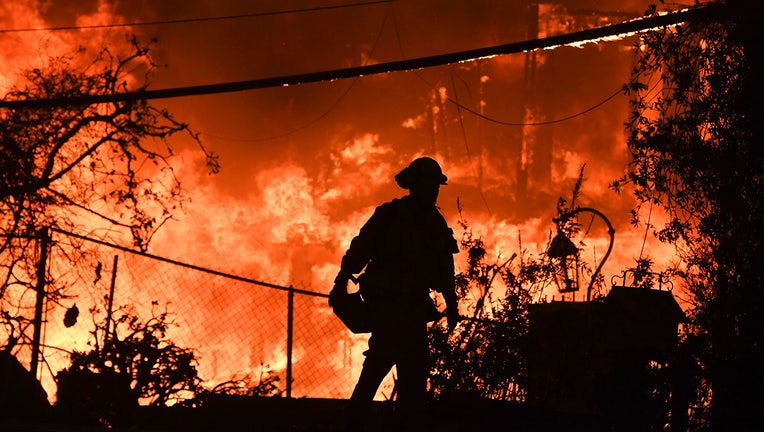 A firefighter is silhouetted by a burning home along Pacific Coast Highway during the Woolsey Fire on November 9, 2018 in Malibu. (ROBYN BECK/AFP/Getty Images)

LOS ANGELES - Fueled by a "perfect storm" of factors, the Woolsey Fire that burned nearly 97,000 acres in two counties and destroyed more
than 1,600 structures overwhelmed local fire agencies during its initial hours, even though they are among the "largest, most experienced agencies" in the nation, according to a Los Angeles County report released Wednesday.

The "After Action Review" of the Woolsey Fire, which erupted Nov. 8 in Ventura County and quickly burned into Los Angeles County, prompting mass evacuations that included the entire city of Malibu, detailed major success stories achieved by responding agencies, but said the fire quickly evolved into "an event never experienced in the Los Angeles region."

The report, prepared by a consulting company hired by the county to review the response to the fire, noted that the Woolsey blaze broke out shortly after a mass shooting a the Borderline Bar and Grill in Thousand Oaks and as the massive Camp Fire was raging in Northern California and taking up significant state fire resources. A separate fire, the Hill Fire, had also broken out just hours before the Woolsey Fire occurred.

The report noted that the Woolsey Fire quickly presented "experienced departments" with "unprecedented complexities," including:

-- a fire moving at a speed that at times "outpaced their historically strong response efforts";

-- loss of electricity due to damaged power infrastructure;

-- immediate threats to lives and structures;

-- unavailability of mutual-aid units due to other major fire incidents in the state.

READ THE FULL REPORT: County of Los Angeles: After Action Review of the Woolsey Fire Incident

"Even some of the largest, most experienced agencies in the United States were, at times, overwhelmed in the first hours by this incident's speed and weight of impact, exposing some limitations between the agencies and systems as they meshed into a single, wide-area regional response team in less than 24 hours," according to the report.

The report also noted that the Woolsey Fire should serve as a lesson to the public that in a mass emergency, public agencies will not always be immediately available to help them.

"The public has a shared responsibility for preparedness which requires ongoing education programs by the agencies," according to the report.

County Supervisor Sheila Kuehl said that while the report shows that fire and other agencies performed admirably to protect lives, it also shows "there are steps that the county, city governments, community and homeowners groups and individual residents must take in order to improve our emergency response."

"The recommendations in this draft report call for more frequent and clearer communications to residents and between agencies, as well as for better collaboration across counties, county departments, cities and special districts," she said. "Fires don't pay attention to county and city boundaries, and our coordinated response must also operate seamlessly between jurisdictions at the speed the incident is moving."

The county will hold a pair of meetings to present findings of the report and gather public input. The first will be at 10 a.m. Saturday at the Agoura Hills Performing Arts and Education Center on the campus of Agoura Hills High School, 28545 W. Driver Ave. The second will be held at the same time and location on Nov. 8.