Since pro football returned to Southern California four years ago, we have been waiting for this day. The Rams and Chargers now have a new home.

INGLEWOOD, Calif. - It's unclear when any fans will get to see it, but the $5 billion home of the Rams and Chargers was officially opened Tuesday with a ceremonial ribbon-cutting, setting the stage for a spectator-less debut this weekend. 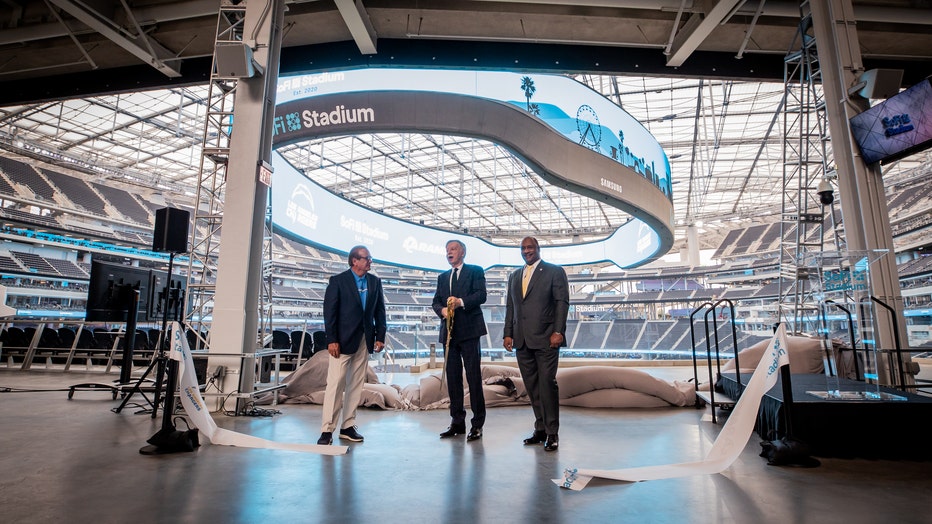 "We are in the team business, and you can't get to a moment like today without a great team," Kroenke said. "I would like to thank the 17,000 people who have worked on this project over the past four years. During a period of unrest and change in many parts of the country, it's been our deepest privilege to work on a project this special with such a diverse workforce. Thank you for making our vision a reality."

With Kroenke developing and bankrolling the project, the Rams will be the stadium's primary tenant. although the Chargers will share the venue. The Rams will christen the stadium Sunday night, when they take on the Dallas Cowboys in a nationally televised matchup.

But the stadium will be devoid of fans, thanks to the continuing coronavirus pandemic. The only occupants of the seats -- which is designed for 70,000 fans but can hold up to 100,000 for select events -- will be cardboard cutouts purchased by fans who want their faces to be in the stands. 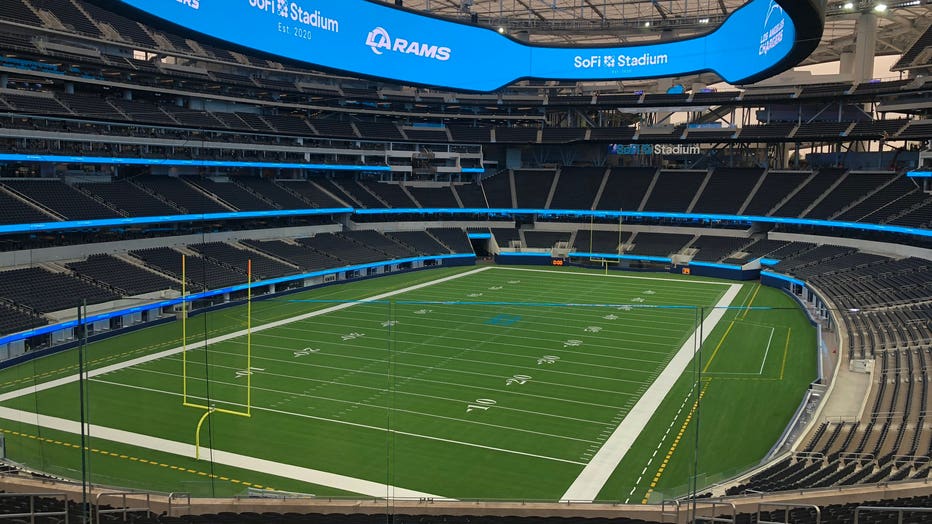 The stadium instantly becomes Inglewood's crown jewel, sitting adjacent to the Forum. A new Clippers arena will soon take shape across the street.

The stadium will ultimately be surrounded on the 300-acre property by a sweeping entertainment complex, including a performing arts venue.

The 3.1 million-square-foot stadium itself features more than 260 suites and a 70,000-square-foot wrap-around video board, billed as the only 4K end-to-end videoboard in sports.

"When you see our SoFi Stadium home and the ongoing development surrounding it, you have to marvel at Stan Kroenke's vision," Spanos said. "This is an iconic project, anchored by an iconic stadium, that will not only redefine the city of Inglewood, it will redefine the landscape of greater Los Angeles for the next century and beyond. This has been a long time coming, and we cannot wait to usher in a new era of Chargers football on what will undoubtedly be the grandest stage in all of sports."

The stadium has already booked a variety of musical performances, although they were delayed due to the coronavirus. Taylor Swift has been scheduled to star in the venue's first event, with Kenny Chesney, Motley Crue and Def Leppard already booked.

The venue will also host Super Bowl LVI in 2022 and college football's national championship in 2023, along with opening and closing ceremonies of the 2028 Olympics.

Following the ribbon-cutting, the Rams and the stadium's naming-rights partner, personal-lending company SoFi, announced a "Good for Good" promotional program to benefit the local community.

SoFi announced plans to donate $20,000 to supply WiFi hotspots to households in the Inglewood Unified School District, noting that roughly half of the district's students don't have wireless internet connections at home.

Throughout the NFL season, for every successful field goal or point- after-touchdown scored at the stadium, SoFi will donate $1,000 to the education nonprofit City Year, which aims to help students from low- to middle-income families. The money will primarily benefit Crozier Middle School in Inglewood, where the Rams will fund a City Year team.