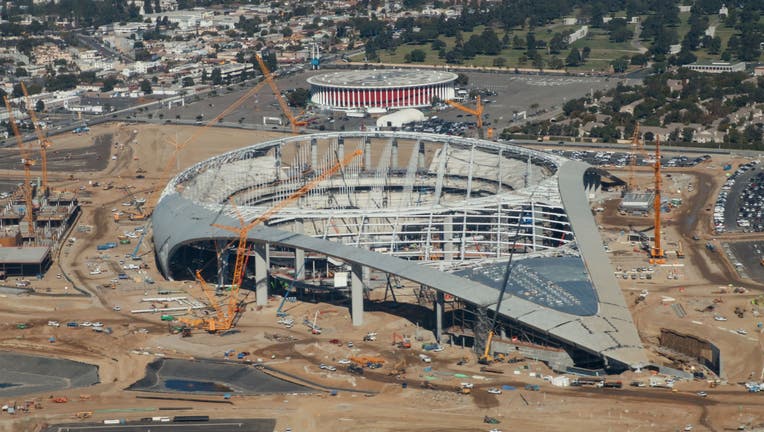 Aerial view of the SoFi Stadium, still under construction, future home of the Rams and Chargers in Inglewood, California on October 23, 2019.(Photo by DANIEL SLIM/AFP via Getty Images)

LOS ANGELES - The Los Angeles Rams announced that fans can purchase cardboard cutouts of themselves to help fill stadium seating for the Sept. 13 SoFi Stadium home-opener against the Dallas Cowboys and for games held amid the COVID-19 pandemic.

For the week-one "Sunday Night Football'' matchup and throughout the 2020 NFL season, fans can purchase cardboard cutouts presented by SoFi at TheRams.com/game-faces-for-good.

The cutouts are part of the Rams' "Game Faces For Good'' program, and
proceeds will go toward the Los Angeles Rams Foundation to address social injustices, including poverty, education inequities, food insecurity and homelessness, the team stated.

The Los Angeles Rams announced that fans can&nbsp;purchase cardboard cutouts of themselves to help fill stadium seating for&nbsp;the Sept. 13 SoFi Stadium home-opener against the Dallas Cowboys and for games&nbsp;held amid the COVID-19 pandemic.

"When our team runs out of the tunnel at SoFi Stadium for the first time on Sept. 13, it will be a historic moment for the Los Angeles community and the entire Rams family,'' Rams Vice President of Community Affairs and Engagement Molly Higgins said.

"While the Rams' house will not be complete until our fans can join us at SoFi Stadium, we wanted to find a creative way to get our passionate fans in the building and raise money to further our work to address the social injustices that are deeply affecting our community.'' 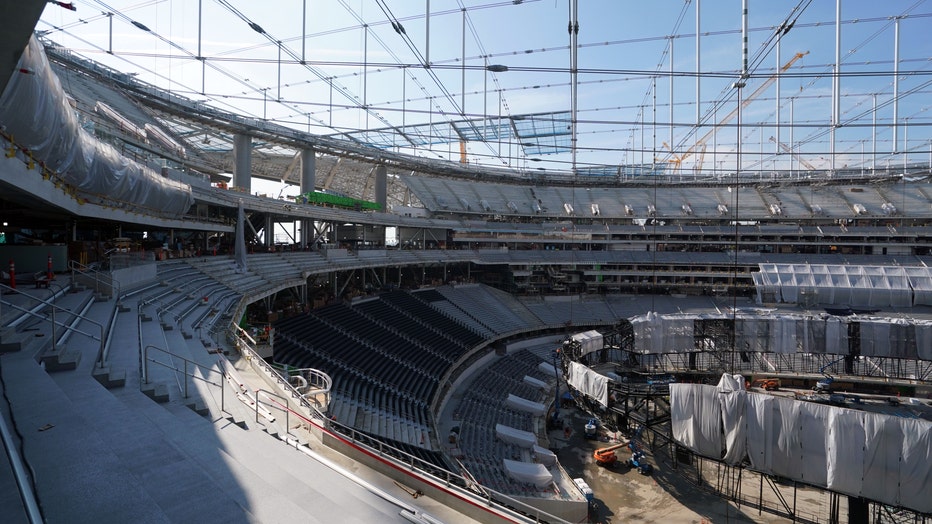 INGLEWOOD, CA - JANUARY 22: The Rams update the media with a tour of their new SoFi Stadium as it nears completion in Inglewood on Wednesday, Jan. 22, 2020. The stadium will open in the summer. (Photo by Scott Varley/MediaNews Group/Torrance Daily Br

Rams season ticket holders will have the first chance to purchase cutouts for the game against the Cowboys for $70 each during presale that began today.

All cutouts will be positioned in the end zone sections during home games.

Fans will be required to upload a high-resolution photo and select a royal or bone jersey, or a Rams T-shirt, and number for their 18-by-35-inch cutout.

"Game Faces for Good'' cutouts purchased in the same order will be seated together in SoFi Stadium, and photos of pets will be permitted. Fans can
also have their cutout shipped to their homes following the game for an
additional cost.

Additional cutouts will be created throughout the season to honor and recognize first responders, veterans and active-duty service men and women, as well as cancer fighters and survivors, the Rams stated.

If cutouts are purchased for games in which fans are permitted to attend, purchasers will be able to choose to receive a refund or donate the funds used for the purchase.