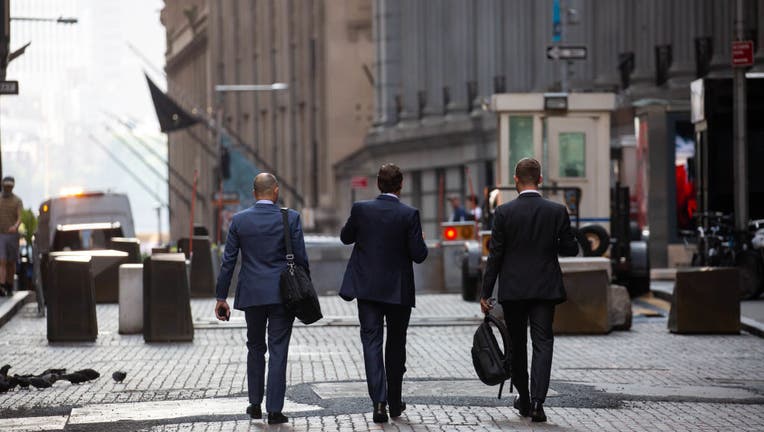 Pedestrians walk along Wall Street near the New York Stock Exchange (NYSE) in New York, U.S., on Thursday, July 22, 2021. After a year of Zoom meetings and awkward virtual happy hours, New York's youngest aspiring financiers have returned to the offi

After the national gas price average hit a new record-high overnight Friday, some employees are raising concerns that they can’t afford daily commutes amid pain at the pump.

Google Maps workers recently wrote in a petition that the cost of gas wiped out their paychecks, which was followed by support from the workers’ union for Google’s parent company Alphabet signaling in a tweet "there’s a problem" "when you’re not even paid enough to make it to work."

"Gas is around $5 per gallon currently," the petition read, per The New York Times' report, "and many of us in the office are not able to afford to live close to the office due to our low salaries and the high cost of housing."

But it’s not just tech workers – 22% of Americans commute 30 minutes or more, according to data from Statista. However, to incentivize returning to the office, some companies are reportedly offering to waive parking fees or provide free lunch.

GAS PRICES ON THE ROAD TO $5 NATIONWIDE VERY SOON

The national average for a gallon of gas was $4.76 on Friday, according to AAA, However, even before prices reached their current highs, employees economized by working from home. According to Upwork, Americans saved a combined $758 million in gas costs from commutes.

"People have paid the price all Memorial Day weekend, we're at all-time-high prices," Sen. John Barrasso, R-Wyo., told FOX Business’ Hillary Vaughn. "And the question is, who are they going to believe? Joe Biden talking at them, or their own two eyes and their empty wallets?"

Other Republicans expressed that President Biden’s attempts to lower gas prices, such as using the Strategic Petroleum Reserve, aren’t working.

"Inflation is the worst tax possible on American families," Rep. Jim Jordan, R-Ohio, said on "Varney & Co." Friday. "Part of me says this is intentional, and we started to kind of hear that from Joe Biden: 'Well, this is a transition period we've got to go through.' No, it isn't."

In a press conference Friday, Biden admitted Americans don’t really care why gas prices are so high, they just want them to go down.

"And look, I understand that families who are struggling probably don't care why the prices are up. They just want them to go down," President Biden said. "But it's important that we understand the root of the problem. So we can take steps to solve it."

"I've been upfront with the American people from the outset that there would be a cost here at home of Putin's decision to brutally, savagely invade a sovereign nation," the president continued.