Surveillance video captured the scary incident at a diner in Lawton, Oklahoma.

LAWTON, Okla. - A 12-year-old girl saved her younger brother from an apparent abduction attempt at a diner in Oklahoma.

Crystal Phillips, of Lawton, Oklahoma, said her mother came into town for the holidays and took Phillips’ three children out to lunch on Dec. 26 while she was at work.

As all of the children, 12-year-old Makayla Phillips, her 4-year-old sister and 2-year-old brother, were getting seated, a strange woman approached their table. 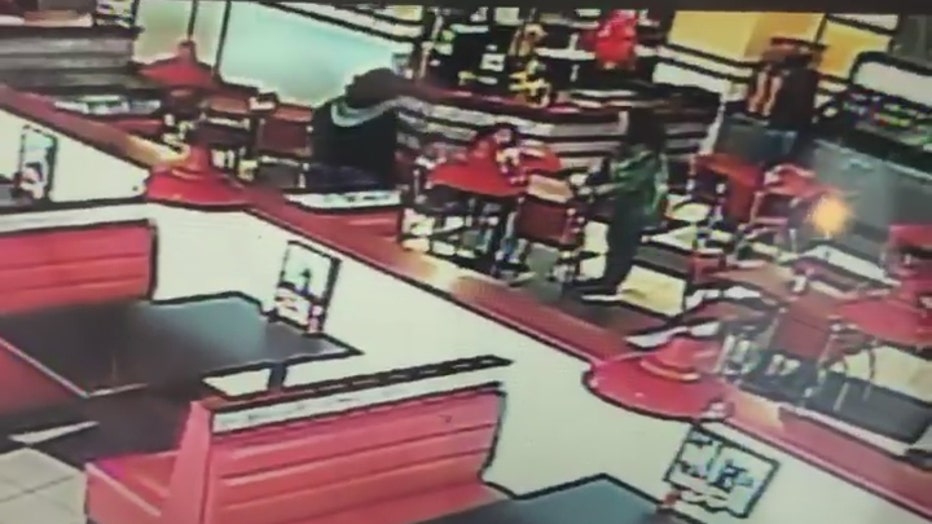 "She walked up to them and gave both of them a kiss," Makayla Phillips told KSWO-TV. "My grandma, she thought it was weird and not right, so she decided to move us to a different table."

Surveillance video posted by Crystal on Facebook shows the woman then pick up the 2-year-old boy from his chair. Makayla quickly grabs her brother back from the woman.

"She picked him up and took one step, but I grabbed him back from her and yelled at her and said, ‘’Don’t touch my brother,’" Makayla told the news station. "We were just yelling and she was saying my brother was her baby, and I was just yelling back at her saying ‘that’s not her baby, that’s my brother.’"

The incident drew the attention of restaurant staff, who asked the woman to leave — at which point she began saying disturbing things to the family.

"She was talking about how she had a baby and she decapitated her baby and how she did all these things to her baby," Makayla told KSWO-TV.

“Holding my baby real close tonight. No parent should ever have to deal with this,” Crystal Phillips wrote in a Facebook post about the scary incident. “I got the call at work that my son was almost abducted.”

Crystal Phillips said a police report was filed and the Lawton Police Department was investigating the incident.

"Your kid may know somebody before you know somebody. They may know them from a sporting event or something," Sergeant Timothy Jenkins told the news station. "So, we try to encourage to make sure you know everybody your kid is talking to, but especially if you’re out and about and you have no idea who this person is, ask questions.“

Crystal Phillips said she hopes to spread awareness that this situation could happen anywhere.

“If it wasn’t for my brave daughter acting quick, I don’t know what would have happened,” she wrote.

RELATED: Video shows boy, 10, run for safety after men attempt to lure him into car with candy