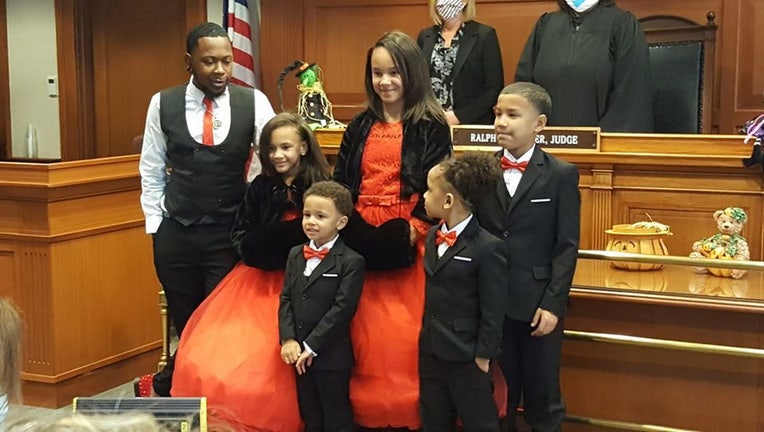 CINCINNATI, Ohio - A single foster dad is now officially a father of five.

Robert Carter began fostering three boys in December of 2019, taking in Robert Jr., Giovanni and Kiontae into his home. But he later learned the brothers had two sisters as well, Marionna and Makayla, who were also in the foster system.

He said the siblings had been separated for six months.

“We met up for visits, and all the kids were crying," Carter told Fox 19. “They didn’t want to leave each other, and at that moment, I knew, OK, I have to adopt all five.”

Carter said he grew up in foster care, and was separated for years from his siblings. He didn't want the children to experience what he went through.

“My mom had nine kids, and I didn’t see my youngest again. He was two," he recalled. "I didn’t see him again until he was 16, so for me going through that, I knew how important it is for them to see each other and be around each other. When I had my boys before I got the girls, that’s all they talked about was their sisters.”

RELATED: 17 inmates baptized in Mississippi jail: 'We hope this is a new start'

Carter said he worked to get a bigger house so he could officially adopt all five of the children.

Adoption case manager Stacey Barton said Carter was the only foster parent willing to adopt all of the siblings.

"I've never had a single father adopt five children," Barton said. "His childhood background has made him aware of the importance of keeping siblings together."

“Every night I talk to them and let them know, ‘I’m your dad forever. I know what it’s like and I’m always here for you,'" Carter told WLWT. "I’m here for them no matter what.”