SAN DIEGO, Calif. - On Saturday, photographer Jordan Anast captured images of a shark hurling its body out of the water behind a surfer.

"[I] thought it was a dolphin," said Jordan Anast, who captured the shots at San Ofre Beach. After taking a closer look, he realized it was a shark. 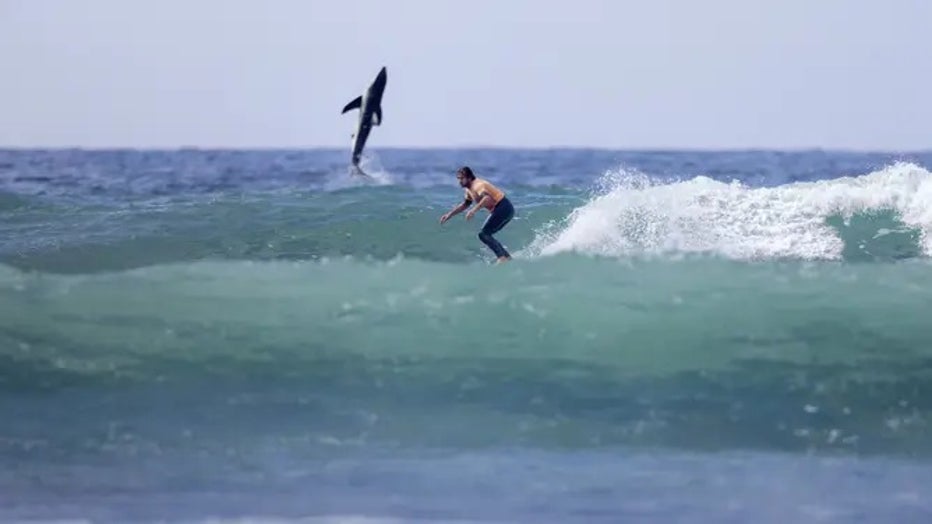 His photo series first includes an image of surfer Tyler Warren standing on his surfboard as he rides a wave toward shore. Behind him is a clear blue sky.

In the next image, the sky is partially obscured by a large, photobombing fish – a shark.

The shark, with its body completely out of the water, has its nose pointed to the sky as its shadowy gray body and fins glisten underneath the bright California sun. All the while, Warren seems unaware of the shark leaping into the air behind him.

The photo series continues, showing the shark falling back into the water as Warren draws closer to the shore. According to Anast, the shot was "one in a million, right place, right time."

"I get satisfaction stopping time and creating a moment that lasts forever," he said.

You can see more of Anast's work on by visiting his Instagram profile or website linked here.