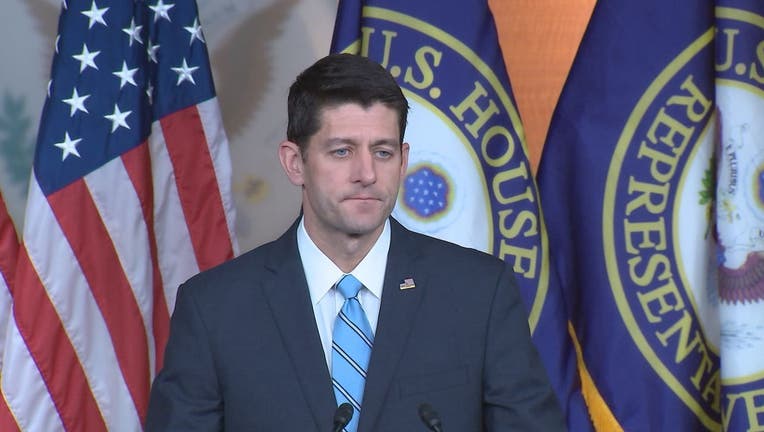 WASHINGTON (AP) -- Speaker Paul Ryan said Tuesday that the House will require anti-harassment and anti-discrimination training for all members and their staffs. The announcement came just hours after a hearing in which two female lawmakers spoke about sexual misconduct involving sitting members of Congress.

"Our goal is not only to raise awareness, but also make abundantly clear that harassment in any form has no place in this institution," said Ryan, R-Wis. "As we work with the Administration, Ethics, and Rules committees to implement mandatory training, we will continue our review to make sure the right policies and resources are in place to prevent and report harassment."

The move comes days after the Senate unanimously approved a measure requiring all senators, staff and interns to be trained on preventing sexual harassment.

During a House Administration hearing Tuesday on sexual harassment prevention, Rep. Barbara Comstock, R-Va., said she was recently told about a staffer who quit her job after a lawmaker asked her to bring work material to his house, then exposed himself.

"That kind of situation, what are we doing here for women, right now, who are dealing with someone like that?" Comstock asked. Comstock said there should be clear-cut rules about the kinds of relationships and behaviors that are off-limits and create a hostile work environment.

Comstock said the name of the lawmaker she mentioned wasn't disclosed to her, but she emphasized that naming names is an important step in promoting accountability and encouraging victims to come forward.

The Democrat from California recently introduced legislation to make training to prevent sexual harassment mandatory for members of Congress after sharing her own story of being sexually assaulted by a male chief of staff. Her bill also includes a survey of the current situation in Congress and an overhaul of the processes by which members and staffers file harassment complaints.

The bill gained support from both Democratic and Republican lawmakers.

Rep. Gregg Harper, R-Miss., who chairs the House Administration Committee, said in his opening remarks, "I believe we need mandatory training, and probably everyone here would agree."

Speier said since coming forward with her story she's been inundated with phone calls from staffers eager to share their own accounts of harassment and abuse. A petition calling for Congress to make training mandatory has gained more than 1,500 signatures from former Hill staffers.

She did not name the lawmakers mentioned in her testimony, citing the nondisclosure agreements she wants to eliminate.

One Republican lawmaker, Rodney Davis of Illinois, said that addressing the issue of sexual harassment on the Hill is "long overdue" and that Congress must "lead by example." But he expressed concern that the increasing focus on gender hostility in the workplace could create unintended consequences, including "that some offices may just take a short cut and not hire women as a way to avoid these issues."

Gloria Lett, counsel for the Office of House Employment Counsel, replied that such discrimination is illegal.

With each passing day, new revelations of sexual misconduct continue to rock the political sphere. Alabama's Republican nominee for Senate, Roy Moore, has come under fire after several women came forward with accounts of sexually inappropriate behavior or, in at least one case, assault, at Moore's hand when they were teenagers and he was in his 30s. Senate Majority Leader Mitch McConnell, R-Ky., and other Republicans, including Ryan, have said Moore should step aside. One Republican senator has suggested that if elected, Moore should be expelled from the Senate.

Sen. Amy Klobuchar, D-Minn., said women are "nowhere near where we should be" in workplaces across the country -- including the Senate.

"You wonder why there's only 21 women in the Senate, or why there's hardly any women running Hollywood studios ... or major businesses. Well, when you have work environments where people feel like they can't get ahead without having to put out, that's what happens," Klobuchar said.

This story was corrected to show that the last quote was from Sen. Amy Klobuchar, not Sen. Maria Cantwell, as initially reported by a transcript service.