LOS ANGELES - An officer was attacked on a downtown Los Angeles street Friday night during protests against police brutality, and multiple people were detained for allegedly damaging police cars and throwing objects at officers.

Shortly after 10:30 p.m., several businesses in downtown LA were being reportedly looted and vandalized.

Several people were detained shortly before 7 p.m. near Fifth and Olive streets for allegedly throwing objects at officers and damaging police cars that were parked near the intersection, according to broadcast reports from the scene. 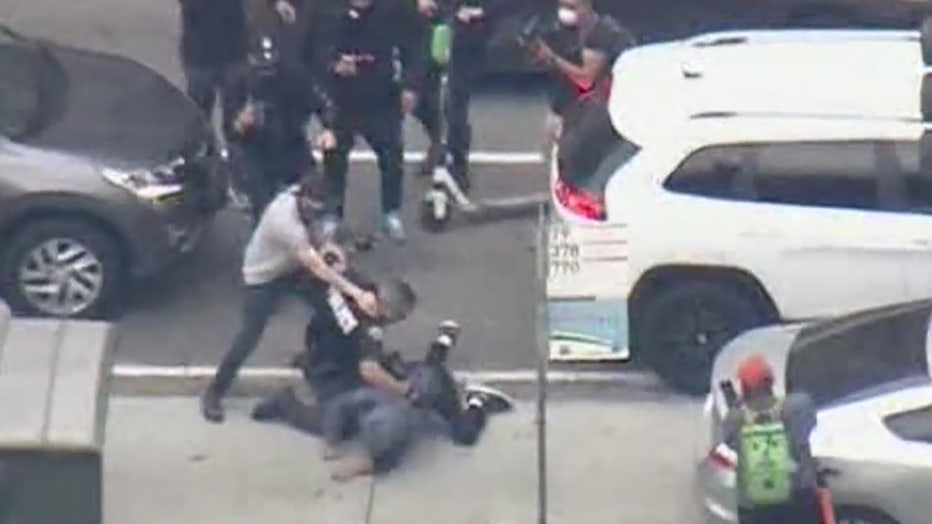 An officer was put in a chokehold and kicked by some protesters in the Pershing Square area, according to broadcast reports from the scene. It was not immediately clear if that was the same officer who was sent to a hospital with injuries from a confrontation with some of the demonstrators. 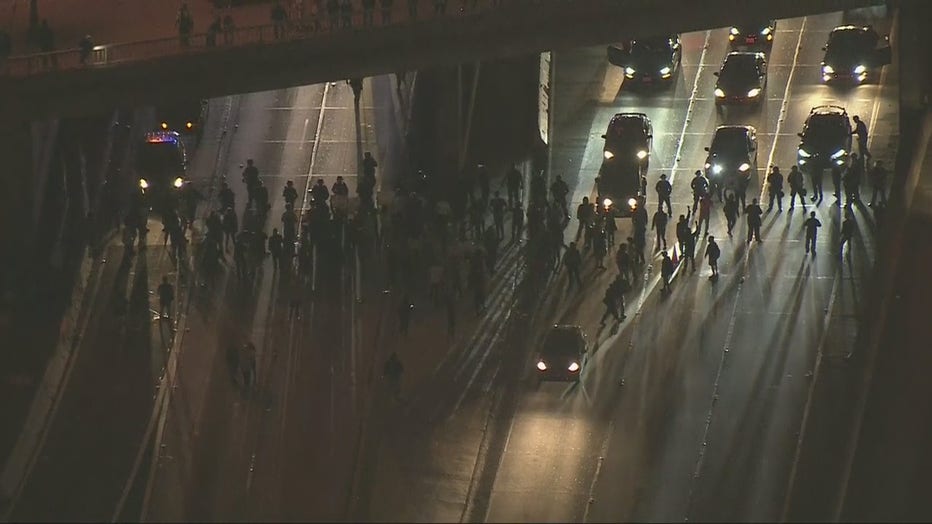 KNX-AM (1070) reporter Pete Demetriou was attacked during the protests, he said on Twitter. About five people punched him before others came to his aid, and a woman grabbed his microphone and yelled obscenities into it, but he was able to push her away.

A photo circulated on Twitter on Friday of an ABC7 van tagged with illegible graffiti.

Demonstrators initially gathered about 5 p.m. outside City Hall and marched south on Spring Street, then north on Figueroa Street.

The protest was declared an unlawful assembly shortly before 9:30 p.m. due to "repeated acts of violence and property damage," according to the LAPD.

People were advised to get off the streets and businesses were advised to close in the downtown area from the 10 to the 101 freeways and the 110 Freeway to Alameda Street. 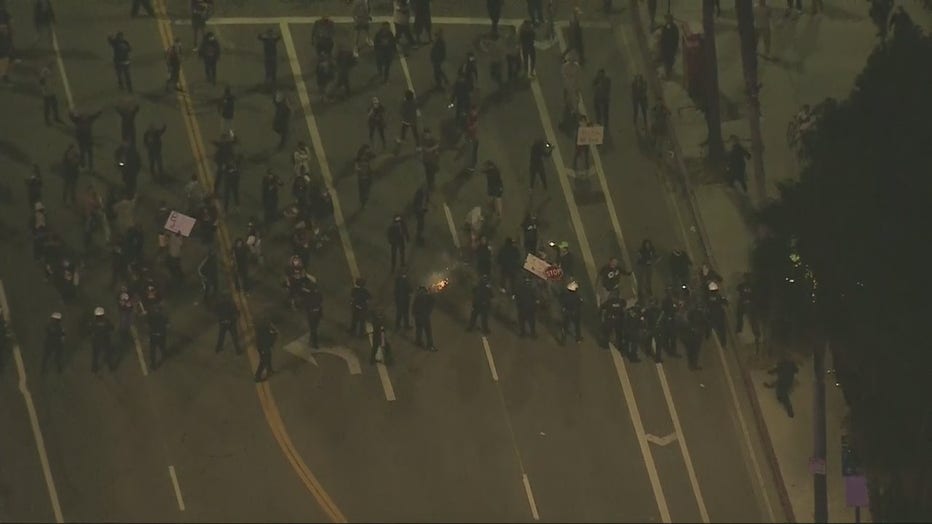 A helicopter announced that those left protesting may be arrested. 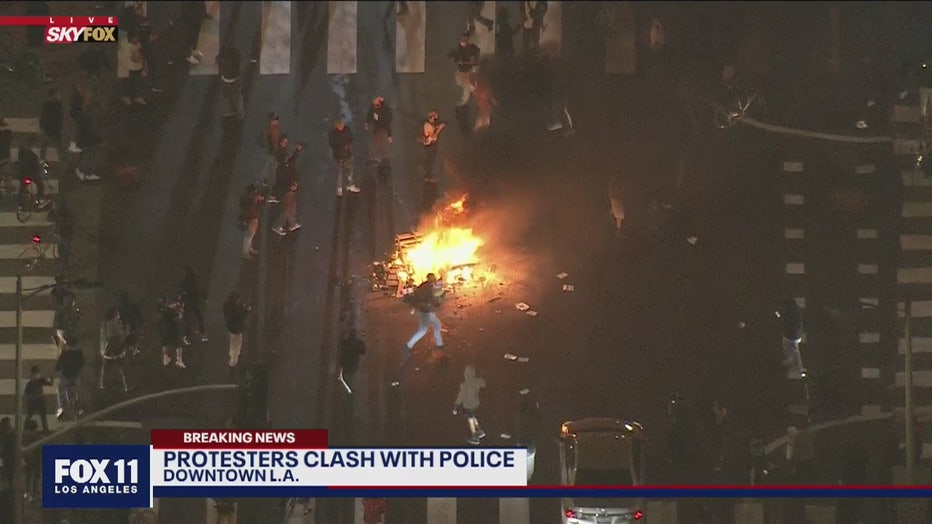 SkyFOX captures big fire burning in the middle of an intersection in downtown LA on May 29, 2020, where civil unrest broke out tonight after LAPD declared tonight's protest as an unlawful assembly.

Mayor Eric Garcetti sent a message on Twitter about 10 p.m. calling for calm.

"I believe in our city. L.A. is strong enough to stand for justice and walk in love," Garcetti said.

"We respect every Angeleno's right to protest, but violence and vandalism hurts all. Let's remember why we march, protect each other, and bring a peaceful end to a painful night."

People took to the streets Friday for the third consecutive night to demand justice for George Floyd, who died Monday after being handcuffed and pinned to the ground by a white Minneapolis Police Department officer, Derek Chauvin, who pressed his knee on the 46-year-old man's neck for several minutes while three other officers looked on.

Video footage of the arrest, in which Floyd is heard saying "I can't breathe," spread widely online, and all four officers were fired.

Chauvin was charged with third-degree murder and second-degree manslaughter on Friday.

The Los Angeles Police Department was placed on tactical alert about 2:20 p.m. as a precaution ahead of the protests, according to Officer Tony Im.

"While the vast majority of individuals in Los Angeles have expressed those views in a peaceful manner, we have witnessed an increasing level of violence and property damage committed by small number of detractors," the LAPD said in a statement issued Friday afternoon.

"The violence involved dangerous projectiles directed at our people as well as some property damage to businesses in the area. While isolated, if left unchallenged we face the potential of those actions expanding and hurting innocent individuals."

Said LAPD Chief Michel Moore: "We stand with our communities and rebuke any instance of police brutality as well as acts of violence or property damage."

The issuing of a tactical alert requires all on-duty personnel to remain on duty, Im said.

There are protests all over the country over the death of George Floyd. FOX 11 reporter Hailey Winslow has a story of one protester, who for him, what's going on right now in the country is very personal.

"We're going to have more people on-duty because staff is not going home... For example, all the day watch people stay on and the night watch people have started, so we have double the amount of staffing," Im said.

Protests in Los Angeles have been generally peaceful, though some demonstrators shattered the windows of two on-duty California Highway Patrol vehicles while hundreds of demonstrators blocked traffic on the Hollywood (101) Freeway, near Alameda Street, downtown Wednesday afternoon.

Thursday's protests outside the Los Angeles Police Department headquarters were on a smaller scale, and some demonstrators surrounded a California Highway Patrol vehicle, but it did not appear to sustain damage, even as at least one protester kicked the cruiser.

Another handful of protesters on Thursday threw water bottles and a skateboard at a law enforcement vehicle near the headquarters. That car also sped off without visible damage.

The department's headquarters was vandalized with graffiti that read "1312 ACAB," a common acronym and its numeric code for "All Cops Are Bastards."