LOS ANGELES - Members of Black Lives Matter-Los Angeles plan to demonstrate Saturday outside Mayor Eric Garcetti's official residence for a fifth consecutive day in an attempt to persuade President-elect Joe Biden not to appoint him to his cabinet.

The group calls Garcetti "the worst mayor in the nation,'' claiming he "has racked up a dismal record of handling Los Angeles' housing catastrophe, providing for the city's growing unhoused population and following through on transportation projects.'' 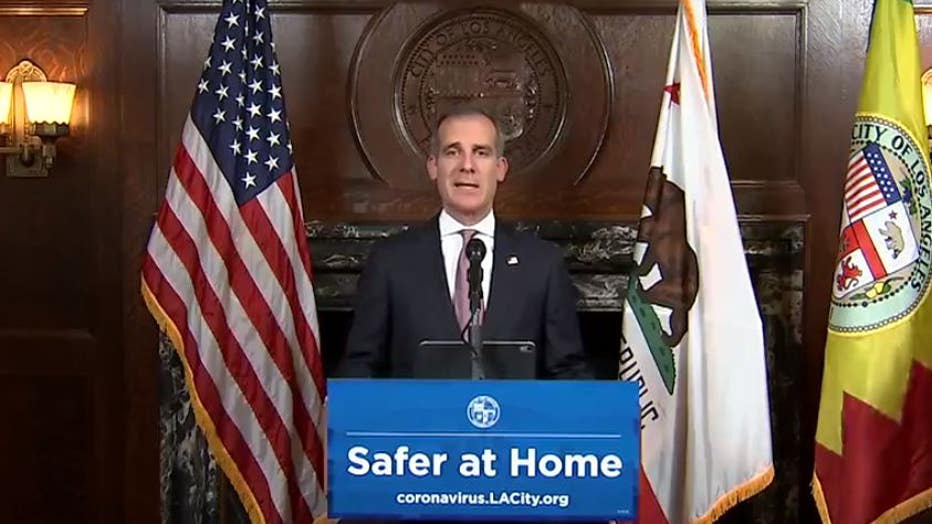 It is under speculation that Garcetti is under consideration to be secretary of transportation or Housing and Urban Development. However, Garcetti, who was a co-chair of the Biden-Harris campaign, has repeatedly said he is not seeking a cabinet position at this time, and his political team has told City News Service since Election Day that he has not considered a position.

A few dozen people were seen near Getty House in Windsor Square on Friday morning. A crowd estimated at between 50 and 100 people demonstrated outside the house Thanksgiving morning, when an unlawful assembly was declared and two protesters were arrested.

RELATED: 2 arrested at protest demanding Eric Garcetti to be excluded from Biden cabinet

BLM-LA representatives told CNS on Friday that the issues they have with the mayor go beyond Garcetti's possible selection for a cabinet position.

"There is no single issue. Garcetti has failed the people of Los Angeles in an unending number of ways: from criminalizing folks for being houseless, to refusing to stand up for people who are killed by his police force,'' said Tabatha Jones Jolivet, a spokeswoman for BLM-LA.

"We refuse to be quiet as President-elect Biden considers him for a cabinet post where his reach will extend to setting national policy.''

Alex Comisar, Garcetti's deputy communications director, said the mayor is deeply concerned for Angelenos struggling to make the rent during the coronavirus crisis and is focused on doing everything possible to help lift
them up.

"The city has put hundreds of millions of dollars toward homelessness and rental assistance programs since the onset of the pandemic, and the mayor will always keep looking for more,'' Comisar said. "The mayor has been clear that we absolutely need more funding from Washington to address the scale of this economic crisis, and he is advocating for that assistance aggressively.''

"I have been focused 110% on these numbers and on COVID and on saving
lives,'' Garcetti said. "It's one of the last things on my mind right now. You know, we have deaths that are going to be increasing, we have record numbers of cases and so I don't have anything to add on that, not because I have anything to hide, I just have nothing to add. Right now my job No. 1 is to make sure I protect the lives of Angelenos.''