President-elect Joe Biden said that the U.S. rollout of the coronavirus vaccine is too slow. He urged all Americans to wear masks to protect themselves, their families, and their country.

President-elect Joe Biden on Tuesday said that the United States will need to endure "maybe the toughest during this entire pandemic" in the coming weeks and months and called on Americans to wear masks to slow the spread of the virus.

"As Roosevelt said, I think, the American people can take whatever we tell them if we tell them straight to the shoulder," Biden said. "We need to steal our spines for what's ahead. We need to follow even more closely the recommendations to slow the spread of the virus."

The president-elect said he will impose a mask-wearing mandate where he has the authority to do so, such as in federal buildings and on interstate travel by plane and train. Biden repeated his call for all Americans to wear a mask during the first 100 days of his administration.

Biden and Trump spar over vaccine

President-elect Joe Biden criticized the Trump administration over the slow rollout of the COVID-19 vaccine. But President Donald Trump fired back.

"It's not a political statement — it's a patriotic duty," he said. "Masking has been a divisive issue in this country but COVID is a killer in red states and blue states alike."

Biden criticized the Trump administration for its rollout of the vaccines and pledged to ramp up distribution after he takes office on Jan. 20.

"We might not see improvement until we're well into March as it will take time for our COVID response plan to begin to produce visible progress," he said.

The president-elect concluded his remarks with his signature phrase — "May God bless you and may God protect our troops" — but this time added a coda.

"Wear a mask," he said, tapping a folder against the lectern in rhythm with his words. 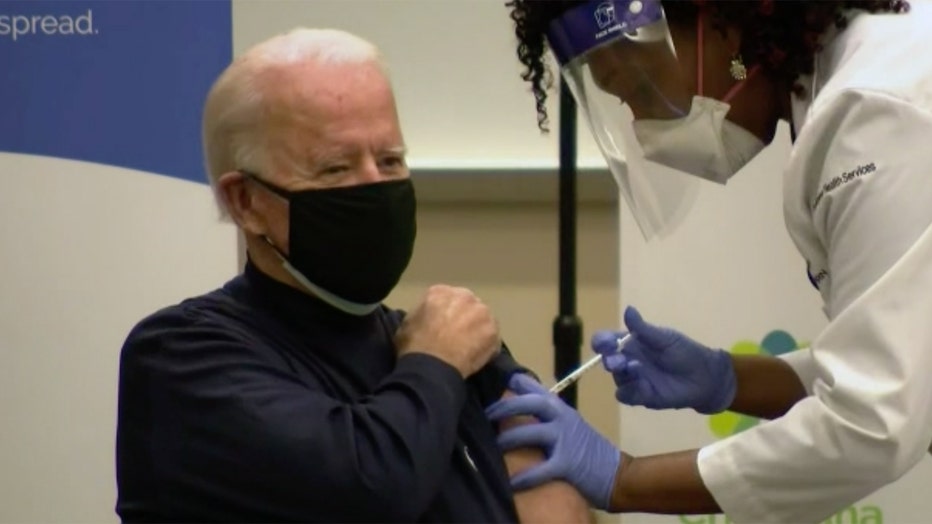