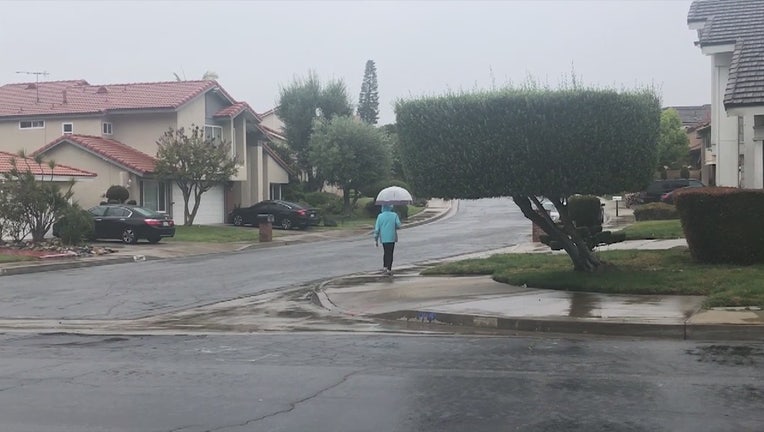 A "potent" and "powerful late-season winter-like storm" will generate moderate to heavy rain in the Southland Monday, likely causing minor mud and debris flows over slopes denuded by wildfires and hazardous winter-weather conditions in the mountains, including a dusting over the 5 Freeway through the Grapevine, according to the National Weather Service.

The NWS forecast between 1 and 2 inches of rain in coastal and valley areas and 3 to 5 inches in the San Gabriel mountains. Hourly rain rates are expected to be between a quarter-inch and a half-inch per hour but could rise to three quarters of an inch on south facing mountain slopes, where thunderstorms are also possible, forecasters said.

A record rainfall rate for an April 5 was recorded Sunday at Sandberg in the L.A. County portion of the San Gabriels. The 0.51 inch recorded bested the 0.5 set in 1969.

The NWS warned that this week's conditions may result in a wet commute in L.A. and Ventura counties, travel delays, rocks and boulders tumbling onto roadways, minor mud and debris flows in burn areas, and urban roadway flooding.

Accompanying the rain will be south winds gusting to between 45 and 55 miles per hour.

In the San Gabriel Mountains in L.A. and Ventura counties, a winter storm warning will be in effect until 5 p.m. Tuesday.

The snow level will drop to around 5,500 feet today and down to between 4,000 and 4,500 feet by Tuesday morning, and "significant snowfall accumulation is likely in the mountains of Ventura and Los Angeles counties," according to an NWS statement.

Between 15 and 30 inches of snow is expected above 6,000 feet and between 6 and 12 inches between 4,500 and 6,000 feet, according to the NWS. Lighter accumulations are expected down to 4,000 feet by late tonight or early Tuesday morning.

"In addition, light snow accumulations are likely on Interstate 5 over the Grapevine by late Monday night or early Tuesday, possibly resulting in travel delays," warned the NWS.

"These conditions could lead to road closures and travel delays. In addition, light snow accumulations are likely on Interstate 5 over the Grapevine by late Monday night or early Tuesday, possibly resulting in travel delays."

The NWS urged people who have to drive in the mountains to keep an extra flashlight, food, and water in their vehicles.

Thunderstorms are possible across Southern California's coastal waters because of the "cold, potent storm" said the NWS, adding that the storm system will move slowly southward from northern California through the middle of the week.

"Any thunderstorms that form will be capable of producing chaotic locally gusty winds and rough seas, dangerous lightning, heavy rainfall with reduced visibility, and isolated waterspouts, The NWS warned in a statement. "If a waterspout is spotted, head away at a 90 degree angle from the apparent direction."