A pop-up conference in Venice is exploring the future of psychedelics and how it could be used to help with depression.

LOS ANGELES - Could psychedelics help solve the mental health crisis? That’s the question on the mind of many attending the ‘Psychedelics X Tech: How to Change your Mind’ forum this week in Venice.

Gross curated the event on Wednesday with the screening of how to change your mind and the panel with World Wide Mind and Tiny Elephant studios.

His co-sponsor is none other than one of the creators of Papa Barkley’s, one of California’s leading marijuana wellness products companies, who believe there is money to be made and ethically.

"It’ doesn’t have to be all about money, it’s about helping people and the community as a whole improve," stated Guy Rocourt.

FOX 11’s Christina Gonzalez spent some time with Rocco Nugent, who opened up about how psychedelics therapies, along with yoga and other alternative practices, helped him deal with a depression that had him seriously considering ending his life at one point. He is the son of famed musician Ted Nugent. The unapologetic, very right leaning star, has been open about his distrust of plant medicine.

"My dad has been clean and sober for many, many years. And we have had many serious conversations about the danger of drugs, but he is supportive of what I am doing," Rocco explained.

Psychedelics do remain illegal in the U.S. and attempts to legalize their use in California has stalled. 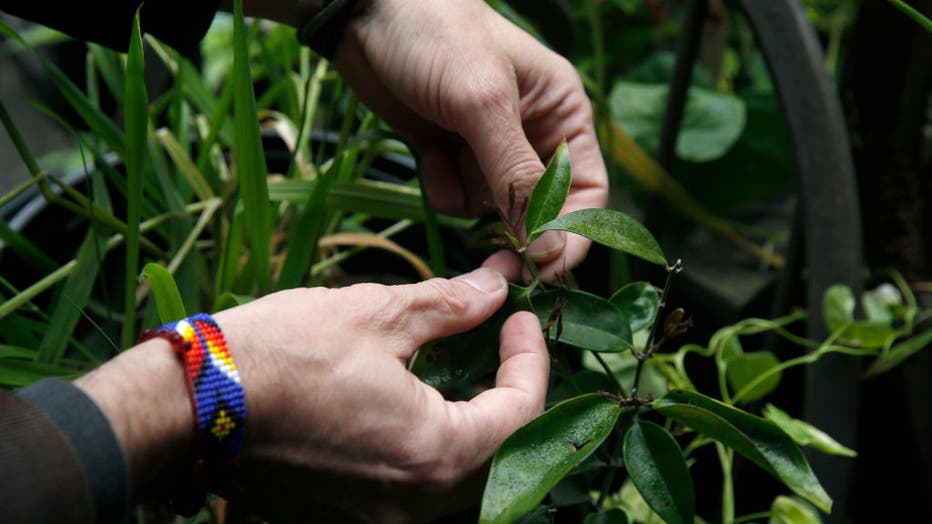 Ketamine infusion treatments are legal under medical supervision, but not covered by insurance despite numerous studies citing its help with PTSD. Clinical studies about psychedelics’ use to help veterans are underway. For right now, though, it’s only in religious services that federal authorities are somewhat tolerant, especially with the use of Peyote by Native Americans.

Gross has led numerous religious ceremonies using psilocybin mushrooms... but don’t come to the event looking for samples-- they are not providing any kind of illegal substances.

Still, there are plenty of discussions and other free experiences like ‘Take Me to the Light’, which uses Ajna Light therapy to stimulate the DMT in the pineal glands and bring you as close to a psychedelic healing experience as possible, without breaking the law, Gross explained.

President Biden’s administration "anticipates" that regulators will approve MDMA and psilocybin within the next two years for designated breakthrough therapies for PTSD and depression. The administration is "exploring the prospect of establishing a federal task force to monitor" the emerging psychedelic treatment ecosystem, according to the letter sent by Assistant Secretary for Mental Health and Substance Use Miriam Delphin-Rittmon to Rep. Madeleine Dean, D-Pa.

The sound therapy experience is being offered now through Sunday, August 21 free of charge, from 12 to 5 p.m. every 1/2 hour, outside the event venue, with musical entertainment between 5 and 10 p.m.

If you want to find out more you can go to Creatingfun.com/ascension. For information about studies and legalization efforts visit maps.org