A man barricaded in Signal Hill for several hours was smoked out and subdued by a K-9.

SIGNAL HILL, Calif. - A man wanted on alleged drug and weapons offenses barricaded himself inside a Signal Hill garage for about nine hours today, prompting a SWAT standoff and some evacuations of neighboring residences before being taken into custody.

The standoff began around 7:10 a.m. when police tried to contact the unidentified man in a garage behind a home in the 1900 block of Dawson Avenue, according to Signal Hill Police Department Lt. Kelli Crigler. 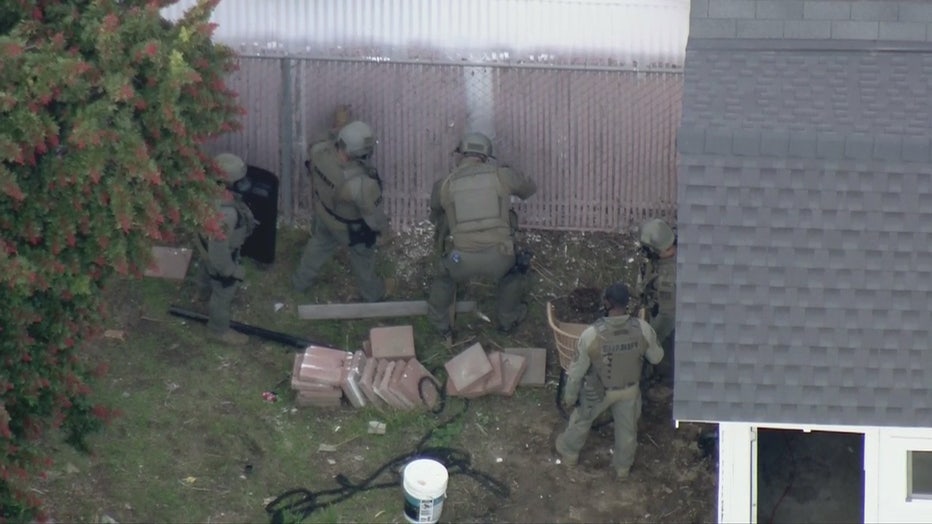 The unidentified suspect refused to come out, and a SWAT time arrived at the location around noon. A second SWAT unit arrived at the scene about three hours later. Some neighboring homes were evacuated during the standoff.

Late Tuesday afternoon, authorities fired a gas canister into the garage to smoke the suspect out, and when he emerged, a police dog was deployed to subdue him, officials said. Crigler said a single 40mm rubber bullet was fired at the suspect, who was taken into custody around 4:10 p.m.

A barricaded suspect in Signal Hill gives up after being taken down by a K-9.

The suspect was taken to a hospital for treatment of dog bites. Police said he was being sought on drug, firearm and domestic violence allegations, and a relative alerted police to his whereabouts.