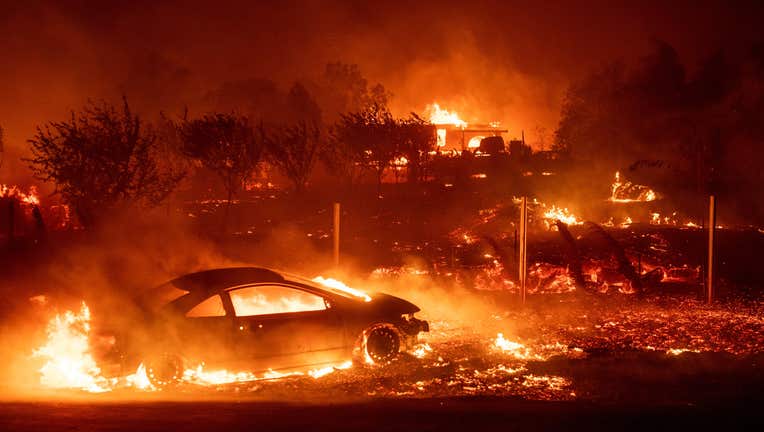 TOPSHOT - Vehicles and homes burn as the Camp fire tears through Paradise, California on November 8, 2018. - More than 18,000 acres have been scorched in a matter of hours burning with it a hospital, a gas station and dozens of homes. (Photo by Josh (Getty Images)

SAN FRANCISCO (AP) - Pacific Gas & Electric said Monday it will plead guilty to 84 counts of involuntary manslaughter in connection with the 2018 fire in Northern California that killed 84 people and decimated three towns.

The utility said in a statement it will also admit to a single count of unlawfully starting a fire.

Under a plea agreement with the Butte County District Attorney’s office, PG&E will pay the maximum fine of about $4 million.

The company has also agreed to fund efforts to restore access to water for the next five years for residents impacted by the loss of a canal destroyed by the fire.

“Our equipment started the fire. Those are the facts, and with this plea agreement we accept responsibility for our role in the fire,” PG&E CEO and President Bill Johnson said.

The blaze that destroyed the towns of Paradise, Magalia and Concow was started by sparks from a PG&E transmission line that failed on November 8, 2018, state investigators concluded.

Butte County officials have said 85 people died in the Camp Fire. It wasn’t immediately clear why PG&E pleaded guilty to 84 counts of manslaughter instead of 85.

The utility filed for bankruptcy in 2018 as it faced billions of dollars in claims from people who lost family members, homes and businesses in wildfires in 2017 and 2018.

The utility has been struggling to emerge from one of the most complex bankruptcy cases in U.S. history and a deadline has been set for it to do so by June 30.

The Nov. 8, 2018 was fanned quickly by strong winds, forcing thousands of people to quickly flee as they tried to escape in their cars as flames from the narrow canyon communities. Survivors described caravans of vehicles engulfed by flames.

The dead were found in burned-out cars, in the smoldering ruins of their homes and next to their vehicles, apparently overcome by smoke and flames before they could get inside them.

In some cases, all that remained of the dead were charred fragments of bone so small that investigators used a wire basket to sift and sort them.