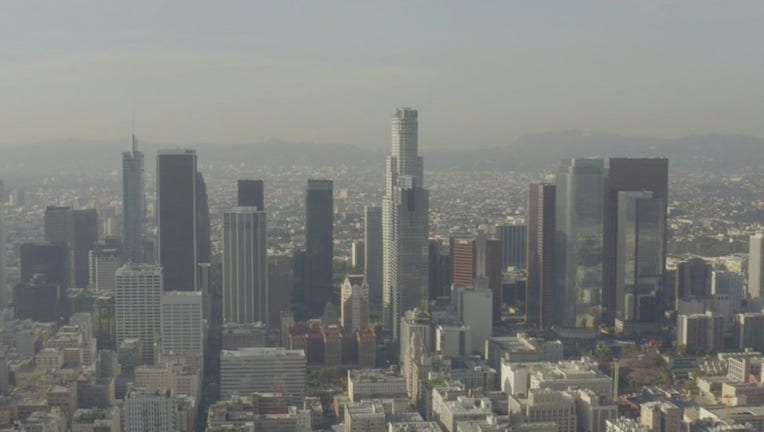 LOS ANGELES - The pandemic is getting worse in Los Angeles as the coronavirus spreads rapidly within households and Californians let their guard down, according to Mayor Eric Garcetti, who said Sunday that the nation’s most populous county is recording a new COVID-19 case every six seconds.

Garcetti said that he’s concerned news of a vaccine rollout "has made everybody so hopeful" that they feel they can relax their behavior.

The 1,298 state and federal staff members being deployed include:

Overall Los Angeles County is seeing high compliance of mask-wearing and people abiding by stay-home orders, Garcetti said. Despite that, the state is reporting enormous numbers of new cases, including more than 12,400 in Los Angeles County on Sunday.

"This is the fastest acceleration of new cases than at any other time during the pandemic," the LA County Department of Public Health said in a weekend statement. The county, which has a fourth of the state’s population of nearly 40 million, has seen 40% of its virus deaths.

The state Department of Public Health on Sunday reported another 181 deaths and more than than 45,350 new confirmed COVID-19 cases across California, bringing the case total to nearly 2.4 million.

More than 26,530 people have died from the virus in California, making it the third state to exceed 25,000 COVID-19 deaths since the start of the pandemic, behind New York with nearly 38,000 deaths and Texas with more than 27,000, according to a tally by Johns Hopkins University.

San Bernardino County east of Los Angeles said it had confirmed two cases involving a mutant variant of the coronavirus that appears to be much more contagious. Four cases were confirmed last week in San Diego County, and the variant has also been reported in Florida and Colorado.

The variant was found in two members of the same household in the Big Bear area who were tested for the virus Dec. 20, the San Bernardino County Department of Public Health said in a statement. One of them had contact with a traveler who returned from Britain on Dec. 11 and began to have COVID-19 symptoms three days later, officials said.

An investigation was launched to determine whether the traveler, also a resident of Big Bear, had the variant as well, or had infected others, county officials said Saturday.

Hospitals stretched to their limits will get help from California’s Fire and Rescue Mutual Aid System, which is most often used in response to wildfires, floods and other natural disasters. Paramedics and emergency medical technicians are being deployed for a 14-day "operational period" to assist emergency rooms and other hospital departments struggling with thin staffing, Gov. Gavin Newsom’s Office of Emergency Services said in a statement Sunday.

More than 20,600 people were hospitalized across California as of Sunday with COVID-19; 4,500 of them were in intensive care, according to state records.

In the San Francisco Bay Area, a coronavirus outbreak at the Kaiser Permanente San Jose Emergency Department, has affected 44 staff members over the past week, hospital officials said. Investigators are trying to determine if the sudden spread was caused by an employee who wore an inflatable Christmas costume in the emergency department on Dec. 25, said Kaiser Vice President Irene Chavez.

Ambulances were being forced to wait in bays as long as eight hours before they could transfer patients inside hospitals — and in some cases, doctors were treating patients inside ambulances, said Cathy Chidester, director of Los Angeles County’s Emergency Medical Services Agency.

Meanwhile, refrigerated trucks were on standby, ready to store the dead and mortuaries are turning away bereaved families because they’re running out of space.

A spike in virus cases among the homeless population around Los Angeles is overstretching the services system, according to a report Sunday in the Los Angeles Times. After averaging about 60 new cases each week through the fall, infections of homeless people doubled in the week after Thanksgiving and have since continued to climb sharply, the Times said. County public health officials reported 547 new cases among homeless residents between Dec. 22 and 29.

A Los Angeles Fire Department captain died Friday from complications due to COVID-19, Fire Chief Ralph Terrazas announced. Capt. George Roque, 57, had been with the department for more than two decades and is survived by his wife and four children. He’s the second LA firefighter known to die from the virus.

Garcetti said the virus surge is infecting a new person every six seconds in Los Angeles County, which should be a warning even for places with less population density.

"This is something now that really is spreading in the home," Garcetti said. "What’s happening in Los Angeles can and will be coming to many communities across America. If you get two households together for Christmas, if you went to a New Year’s gathering — even if it was people you know and love so you thought it was OK — that’s when this virus exploits that weakness and is going far."