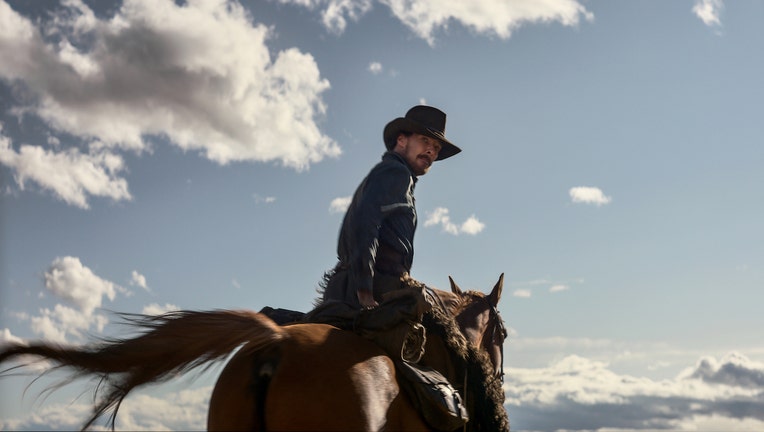 All this week we’ll be spotlighting the 10 films nominated for the big prize. And since we could all use more stuff to watch these days, we’ve also rounded up recommendations for movies (and TV shows) that echo or influence them in some way — all of which are streaming (for free!) on Tubi. Next up: Jane Campion’s hypnotic "The Power of the Dog."

About "The Power of the Dog"

The premise: "The year is 1925. The Burbank brothers are wealthy ranchers in Montana. At the Red Mill restaurant on their way to market, the brothers meet Rose, the widowed proprietress, and her impressionable son Peter. Phil behaves so cruelly he drives them both to tears, revelling in their hurt and rousing his fellow cowhands to laughter – all except his brother George, who comforts Rose then returns to marry her. As Phil swings between fury and cunning, his taunting of Rose takes an eerie form – he hovers at the edges of her vision, whistling a tune she can no longer play. His mockery of her son is more overt, amplified by the cheering of Phil’s cowhand disciples. Then Phil appears to take the boy under his wing. Is this latest gesture a softening that leaves Phil exposed, or a plot twisting further into menace?"

The nominations: "The Power of the Dog" is the leader of the pack with 12 nominations — the most of any movie this year, and not far off from the record for most Oscar nominations for a single film ("All About Eve," "Titanic" and "La La Land" are tied with 14).

Our critic’s take: A tense, elegant Western with teeth

Forgive the pun, but "The Power of the Dog" is a film with teeth. In 1920s Montana, Phil Burbank (Benedict Cumberbatch) ostensibly shares the running of a cattle ranch with softspoken brother George (Jesse Plemons), but it’s clear to all who really stands atop the summit. Yet George manages to temporarily disrupt the fetid little world ruled by his cruel and charismatic brother when he falls in love with the widowed Rose Gordon (Kirsten Dunst), who moves into the Burbanks’ mansion and thus directly into Phil’s splatter zone.

This tense, elegant Western from New Zealand filmmaker Jane Campion ("The Piano," "Top of the Lake") peels back the skin and sinews of its characters with the director’s typically penetrating insight. [Allison Shoemaker]

How to watch "The Power of the Dog"

Streaming: "The Power of the Dog" is streaming exclusively on Netflix.

Rent or own: As of yet, there’s no way to buy a copy of "The Power of the Dog." But you can buy the screenplay and read it instead, if that appeals!

On the big screen: If you mosey on over to one of the select theaters screening it, there’s still a chance to see "The Power of the Dog" on the big screen.

Jane Campion’s sumptuous revisionist Western would pair nicely with any of Hollywood’s revered classics in the genre, from John Wayne’s "Stagecoach" to James Stewart’s "Broken Arrow" to Kevin Costner’s ‘90s epic "Dances with Wolves." For something more outside the box, however, there’s the patient filmmaking and queer themes of Todd Haynes’ "Carol." Or what about the classic American story of brotherhood and tragedy, "Of Mice and Men"?

Caroline Siede contributed to this report.