Orange County courthouses to be closed

ORANGE COUNTY, Calif. - All of Orange County's courthouses will be closed Monday because of retrofitting to install equipment to enable more remote hearings by video and audio.

It was not immediately clear when courtrooms would re-open, but officials said Friday it would be in the "near future"

Several top attorneys, a county supervisor and the head of the sheriff's deputies union expressed alarm Thursday about criminal cases being held at the Central Justice Center in Santa Ana despite an order from the county's chief health officer discouraging assemblies of large gatherings of people during the coronavirus outbreak.

Friday's hearings in the Central Justice Center were an improvement over Thursday because officials did more to reduce crowds in hallways and courtrooms, Orange County Public Defender Sharon Petrosino said. Holding more remote hearings by video and audio is expected to further reduce crowds. 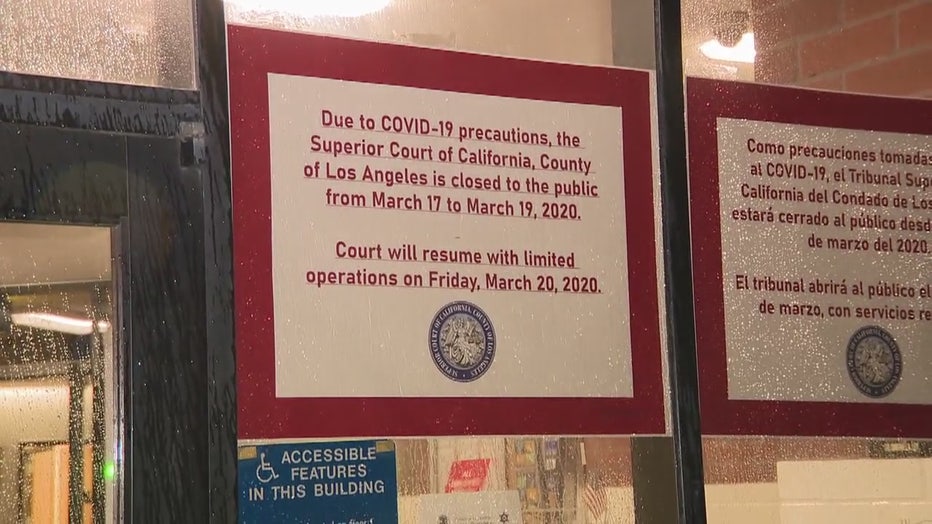 The Orange County closures are among a series of Southern California court closures related to the coronavirus outbreak.

All federal courthouses for the Central District of California will be closed to the public through May 1 except for hearings on criminal duty matters.

The closure was ordered Sunday by Presiding Judge Kevin C. Brazile after a deputy public defender assigned to the courthouse tested positive for the coronavirus.

Brazile said he was notified Saturday that the attorney contracted the virus while caring for a relative who also tested positive.

All affected judges and staff will self-quarantine for 14 days in accordance with federal guidelines, Brazile said.

Both courtrooms have been thoroughly cleaned and disinfected according to the Centers for Disease Control and Prevention guidelines and will be cleaned again on Monday, according to Brazile.

Cases on calendar for through Wednesday in Sylmar will be moved temporarily to the Michael D. Antonovich Antelope Valley Courthouse in Lancaster, Brazile wrote.

Brazile said the courthouse will re-open on Thursday.

The Los Angeles Superior Court also announced Sunday that jury service has been canceled for all jurors with a service week beginning Monday through and including the week of April 6. Jurors scheduled for service during that time do not need to take further action including registering for jury service or checking reporting instructions.

Those with questions were asked to call 213-972-0970 during regular business hours.

In federal civil cases, no hearings will go forward except for emergency time-sensitive matters, such as requests for temporary restraining orders and preliminary injunctions, as ordered by the assigned judge, Chief U.S. District Judge Virginia Phillips announced.

Any hearings on emergency civil matters will proceed by telephone only.

The court's computer system is available 24 hours a day, seven days a week for electronic filing of documents.

Litigants who cannot electronically file their documents, and attorneys who are required to manually file documents pursuant to local rules must mail their filings to the Clerk of Court.

In criminal cases, criminal duty matters will go forward in the Roybal Federal Building and U.S. Courthouse in downtown Los Angeles only. All criminal document duty will be handled by each division in the normal course of business.

Telephonic hearings on other criminal matters may proceed as directed by the assigned judge.

All matters before the Bankruptcy Court will proceed telephonically, Phillips said.