COSTA MESA, Calif. - Cell phone video showed dozens of people running toward a flipped-over pickup truck in a Costa Mesa intersection overnight. Many shouted panicked instructions to others as the chaotic scene unfolded.

Costa Mesa Police say as many as 100 vehicles had flooded the intersection of Sunflower and Hyland Avenues just before 3 a.m. Thursday - driving erratically and performing stunts in front of a crowd of onlookers. Then, the truck flipped, killing a 23-year-old passenger, now identified as Sergio Marroquin, Jr.

RELATED: Spectator dies after being hit by vehicle during street takeover in Costa Mesa

Costa Mesa Police said the victim’s cousin, 22-year-old Mynor Esquivelvalle, was driving. He was arrested at the scene and will face murder charges.

Authorities believe the overnight chaos started with a parking lot takeover in Anaheim around 1:30 a.m. - where cell phone video showed an 18-year-old woman being hit by a car doing donuts. The impact was so forceful, her legs shot into the air.

Anaheim Police say the 19-year-old driver, Preston Shea, took off but they tracked him down and arrested him a couple of hours later. He’s now facing several felonies, including hit-and-run, reckless driving, and assault with a deadly weapon. 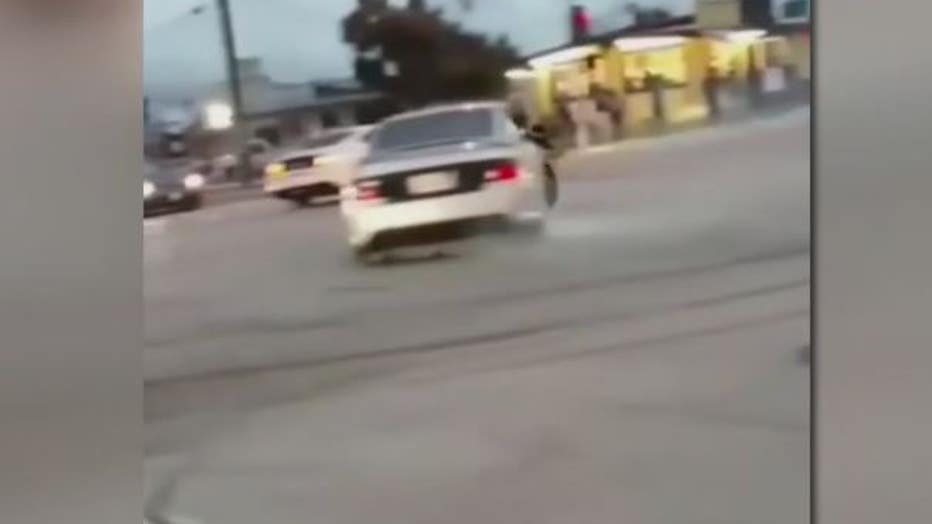 The increasingly popular ‘street takeover’ events are extremely difficult for law enforcement to deal with.

“Officers have tried to approach on their own with these street takeovers, and unfortunately have been met with rocks, bottles, spectators kicking their cars, so we have a protocol now to wait for sufficient units to come,” said Costa Mesa Police Sgt. Zack Hoferitza.

“My guess is that it might be for the thrill of it and/or everybody does things for the ‘gram these days, right? Or for TikTok to get likes,” he said, adding that while they might be considered cool events for young adults to participate in, they are completely unsafe. “It’s 18, 19, 20 year old drivers. Typically they’re inexperienced, they’re engaging in this reckless behavior and the folks that are watching this all go on are in such close proximity to this behavior that’s happening - it’s an absolute recipe for disaster.”

Police say dangerous takeovers have been happening on a weekly basis across the Southland. They usually start with a social media post which details a time and location.

“Within a matter of 15-20 minutes, 200, 300 cars will all show up and all these illegal activities start occurring - the exhibition of speed, the reckless driving, the donuts, the burnouts,” said Sgt. Gallacher. Often, law enforcement will successfully break up a takeover only to have the group move to a new location in a different jurisdiction, which is what they believe happened overnight.