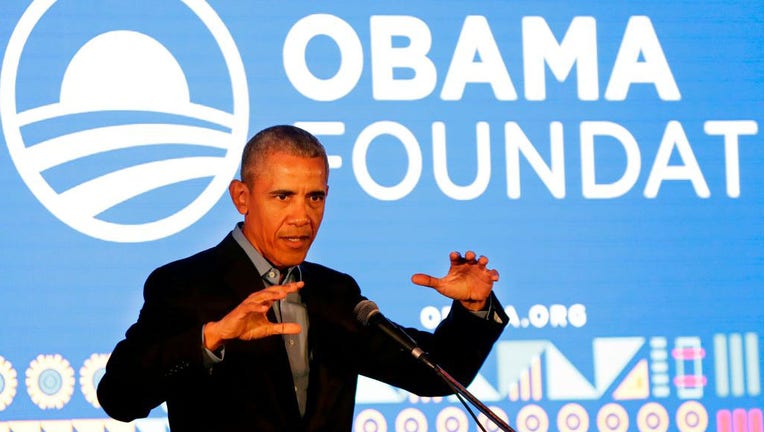 FILE - Former US President Barack Obama speaks during a town hall meeting for the Obama Foundation at the African Leadership Academy in Johannesburg on July 18, 2018. (Photo credit: THEMBA HADEBE/AFP via Getty Images)

WASHINGTON - An Obama Foundation program that has trained hundreds of young leaders across Africa, the Asia-Pacific, and Europe is being expanded to include the United States.

Former President Barack Obama is expected to announce the new program on Thursday during a two-day democracy forum the foundation is co-sponsoring in New York City.

The Obama Foundation Leaders United States program is a six-month leadership development program for emerging leaders between the ages of 24 and 45. The program will serve more than 100 leaders from the U.S. in its first year. Participants will be chosen through a competitive application process.

In remarks prepared for delivery on Thursday at the forum, Obama cites "consistently high interest" in the foundation's programs as a reason for the expansion.

"The creativity, determination and passion of these leaders are already making an impact — in lives saved, environments restored, children educated," he says. "They’re creating new models for clean energy generation and poverty alleviation. It’s remarkable and inspiring — and a little humbling, since I sure wasn’t making such an impact at their age.

"And the good news is, we’re just scratching the surface of what this next generation is capable of," Obama says.

The Obama Foundation Leaders program has worked with more than 700 people in Africa, the Asia-Pacific and Europe since it was launched in 2018 after Obama, a Democrat, left the White House following two terms as president, according to the foundation.

Valerie Jarrett, a longtime Obama adviser, said the U.S. extension of the leaders' program is a "continuation of our efforts to pay it forward by helping the next generation."

The foundation, in partnership with Columbia University and the University of Chicago, is holding its first democracy forum in New York on Thursday and Friday. Democracy thinkers, leaders and activists from across the globe will discuss how to advance and strengthen democracy in the United States and abroad.

Obama is scheduled to close the first day of the forum with a speech and a conversation with a group of foundation leaders.

RELATED: Virginia McLaurin, who danced with the Obamas, dies at 113