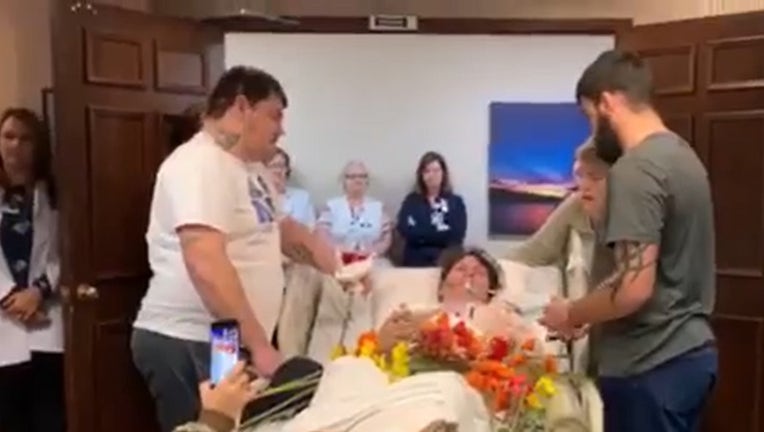 At 50-years-old, Harless was trying to fullfill her dreams of becoming an RN. She enrolled in the nursing program at Ashland Community & Technical College after working as a nursing assistant for around 20 years.

"She has helped people all her life though her amazing personality and through loving and caring for others," fellow student Renee Potter tells Fox 35. "Though I personally have only known her a short time, she has inspired who I am now."

Sadly, her dreams may have seemed harder to reach after being diagnosed with stage 4 lung and ovarian cancer just last week.

"It was very progressive," Potter said. "Just the day before she was sitting in class."

Harless was moved to hospice as her condition declined rapidly.

After her fellow classmates and staff members learned that she might not make it to graduation day next year, they decided to bring the graduation to her.

On Wednesday, a crowd of 100 to 200 people showed up to Our Lady of Bellefonte Hospital where Harless is being treated to surprise her with a pinning ceremony, a tradition for nursing students to wear on their uniforms after graduation.

In a video posted to Facebook, Harless was overwhelmed with joy as her friends, fellow students, family and hospital staff members clapped in her honor.

"Even though the prognosis being so grim, she remains positive and has continued to inspire throughout her journey," said Potter. "She thought she would never be a nurse and though she will never be able to work on the floor. She has already been a nurse just through her sheer love and outlook on life."