"Beast" is "a nimble man-vs.-wild thriller that’s short on bloat and long on tension," according to film critic Clint Worthington. Watch the trailer above.

CHICAGO - Editor's note: Since it's impossible to review every movie as they hit theaters, we'll be checking in on some 2022 films we missed — and which are now available to stream. Here film critic Clint Worthington weighs in on Idris Elba's late summer thriller "Beast," which is currently streaming on Peacock.

It may be hard to imagine in this age of billion-dollar superhero franchises and bloated blockbusters, but there was a time when multiplexes were filled with straightforward 90-minute thrillers that relied on little more than a neat concept and one or two big stars. And so it is with "Beast," a nimble man-vs.-wild thriller that’s short on bloat and long on tension. It’s hardly perfect, but as a throwback to the heady days of old-school narrative suspense, it’s certainly refreshing.

Idris Elba plays Dr. Nate Samuels, a widowed American doctor who brings his daughters Mer (Iyana Halley) and Norah (Leah Sava Jeffries) to his late wife’s birthplace of South Africa so they can reconnect. (They also meet up with Martin, an old family friend and game warden who’s one of the most well-adjusted characters that "District 9" star Sharlto Copley has ever played.)

When this foursome runs afoul of a bloodthirsty lion out in the middle of a game reserve, they’ll have to use their wits — and what few resources they have — to survive. 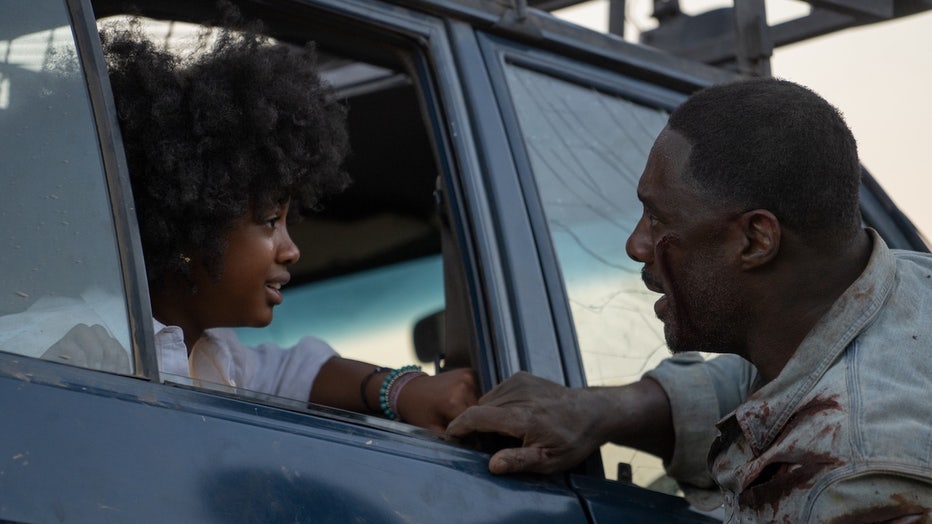 Survival in the savannah

The script by Ryan Engle ("Non-Stop" and "The Commuter," two other single-location thrillers) is nothing special, comprised of a heap of familial-tension tropes with some occasionally queasy African mysticism thrown in. But Icelandic director Baltasar Kormákur ("The Oath") smartly stages everything in a series of elegant, unshowy long takes that never wear out their welcome, aided by Philippe Rousselot’s sun-dappled cinematography. It often feels like we’re watching a "Planet Earth" episode that’s collided with the stripped-down terror of "Jaws," the titular beast (rendered with impressive, if occasionally ropey, CGI) appearing and disappearing from view like the iconic shark.

WATCH FREE ON TUBI: "Idris Elba: King of Speed" — get the app

While the interpersonal drama is nothing to write home about, the cast acquits itself nicely, especially Elba as a man enduring the twin crucibles of survival and fatherhood. Even as contrivances drive the characters from one peril to another (mostly within the carcass of their broken-down Jeep), the film never feels bogged down by extraneous subplots. And the 90-minute runtime keeps the thrills running at a gazelle’s pace, no matter how silly things get. It’s not the most robust cinematic meal, but as a style exercise, it earns a modest place among the rest of the pride.

Make it a double feature with "Shark Bait," streaming free on Tubi

Shark Bait (2022): This shark-filled survival thriller follows a group of friends who decide to steal a couple of jet skis while enjoying a weekend away. But when they end up stranded at sea after a horrific head-on collision, they must find a way to get home, all while hungry predators lurk in the water beneath them. "Shark Bait is a Tubi Original. Rated TV-MA. 85 minutes. Dir: James Nunn. Featuring: Holly Earl, Thomas Michael Flynn, Malachi Pullar-Latchman, Jack Trueman, Catherine Amy Hannay.

"Shark Bait" is streaming free on Tubi — get the app

How to watch "Beast"

"Beast" is currently streaming on Peacock. Plans start at $4.99 a month, with some titles available only to premium subscribers ($9.99/month); the premium tier is also ad-free. "Beast" is also available to purchase on Blu-ray, DVD and digital, with digital rental available starting Nov. 4.