CONCORD, N.C. - A woman in North Carolina won a lottery the same day she gave birth to a baby girl.

Brenda Gomez Hernandez, 28, of Concord, a city in Cabarrus County, North Carolina, won $100,000 from a Powerball ticket she played through the North Carolina Education Lottery, according to a press release issued on Thursday, Dec. 1.

Hernandez reportedly gave birth on Nov. 9 and later in the evening she won $50,000 from the Powerball drawing.

Her prize doubled when a "2X Power Play multiplier hit" after she "matched numbers on four white balls and the Powerball," according to the NC Education Lottery. 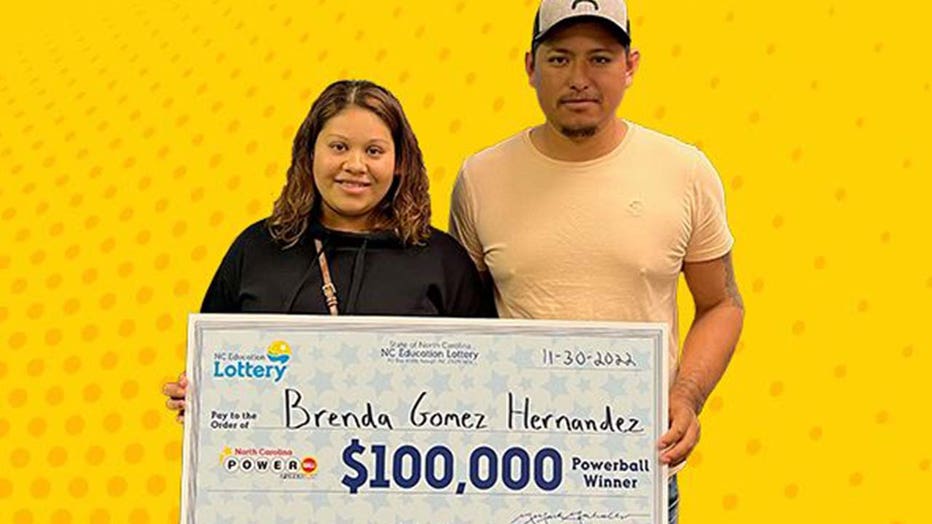 "When I found out I cried," Hernandez told the NC Education Lottery. "I’m just so excited and happy."

Hernandez, who’s now a mother of three, told the NC Education Lottery she chose her numbers based on the birthdays of her two sons.

Her winning lottery ticket was a $3 Quick Pick ticket, which was purchased from the QuikTrip location on Warren C Coleman Boulevard in Concord.

Hernandez claimed her prize on Wednesday at the lottery board’s headquarters in Raleigh. She reportedly took home $65,015 after taxes, according to the NC Education Lottery.

Hernandez told the NC Education Lottery that she thinks her daughter brought her luck.

POWERBALL LOTTERY DRAWING: WINNERS CAN REMAIN ANONYMOUS IN THESE STATES

"I’m so thankful," she said, in a statement.

The mother of three works as a housekeeper. She told the NC Education Lottery she plans to use her winnings to pay for her house.

RELATED: What are the 10 largest lottery jackpots ever won in the US?

The NC Education Lottery is a state-run lottery that raises money for North Carolina schools, students and education programs.

The Powerball is a multi-state lottery that's available in 45 states, the District of Columbia, Puerto Rico and the U.S. Virgin Islands.

Find more information on this story at FOXNews.com.