'He shot my arm off': Store owner shoots would-be robber

The owner of a store that was targeted by would-be robbers turned the tables on one of the suspects by opening fire on him in Norco. The would-be suspect was heard running back to the car screaming, "he shot my arm off."

NORCO, Calif. - The owner of a store that was targeted by would-be robbers turned the tables on one of the suspects by opening fire on him in Norco.

Authorities said that at 2:45 a.m. on Sunday, four male suspects in a black BMW SUV attempted to rob Norco Market & Liquor, located in the 2800 block of Clark Avenue.

The owner of Norco Market & Liquor didn't hesitate to open fire on a male suspect who walked into the store armed with a rifle.

As the suspect ran out of the store, surveillance video from outside the establishment showed a second suspect inside the black SUV exiting the vehicle, also armed. On their way back to the getaway car, the suspect is heard shouting, "He shot my arm off."

After noticing the first suspect running from the scene, both suspects got back into the vehicle and drove away. 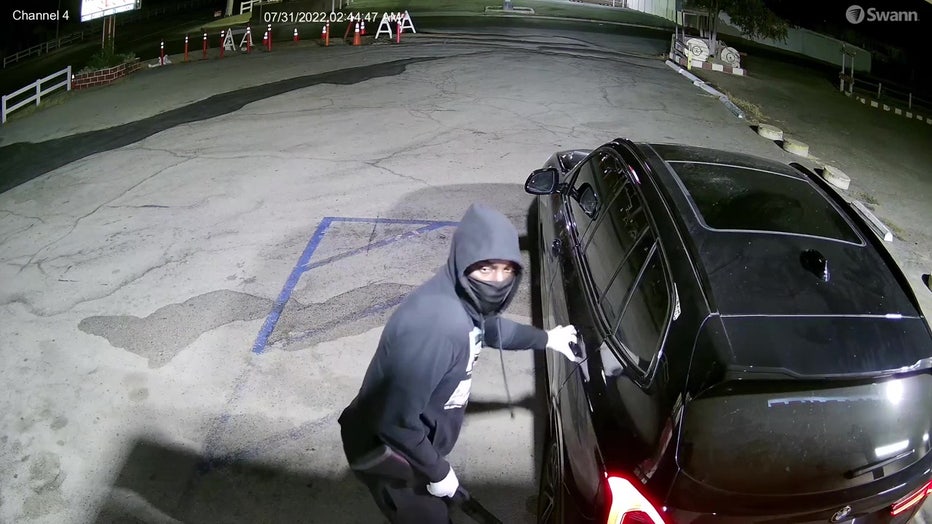 A second armed suspect fled the scene after the Norco store owner opened fire on the would-be robbers. (FOX 11)

The suspects were located at a Southern California hospital, one of whom was suffering from a gunshot wound consistent with a shotgun blast, authorities said. Three additional suspects were also located at the hospital in the suspect vehicle, which had been previously reported stolen. The BMW SUV was also found to contain numerous stolen firearms.

Justin Johnson, 22, of Inglewood, Jamar Williams, 27, of Los Angeles, and Davon Broadus, 24, of Las Vegas, were each taken into custody in the hospital parking lot and booked into the Robert Presley Detention Center for robbery and conspiracy. They are being held in lieu of $500,000 bail.

The primary suspect, a 23-year-old male, remains hospitalized in critical, but stable condition, and his identity has not been released at this time. He will be booked into a Riverside County jail upon his release from the hospital, authorities said.

"In this case, a lawfully armed member of our community prevented a violent crime and ensured their own safety, while being confronted with multiple armed suspects," deputies wrote in a press release.

A store owner in Norco is recovering at the hospital after suffering a heart attack following a dramatic fightback against an armed would-be robber who targeted his business.

The store owner suffered a heart attack shortly after the incident. He is in the hospital recovering after the health scare, FOX 11's Gina Silva reports.

Anyone with additional information on the case was asked to contact investigator Komins or investigator Morgan at the Jurupa Valley Station, at 951-955-2600.