A man driving by a house fire sprang into action, saving the lives of five people while seriously injuring himself.

LAFAYETTE, Ind. - An Indiana man was seriously injured after leaping into action to save five sleeping people — mostly children — from a burning home.

Police in Lafayette, Indiana, said 25-year-old Nicholas Bostic was driving around 12:30 a.m. on July 11 when he saw the home up in flames. He threw his car into reverse and pulled into the driveway. He told police he wasn’t able to call 911 and he "didn’t want to waste time trying to find someone who could."

Bostic tried knocking on the door, but no one answered his calls. He was able to get in through the back door and began yelling for people inside.

When he ran upstairs, he found four people — the youngest a 1-year-old and the oldest an 18-year-old — asleep. Once he got them out safely, they told him a 6-year-old girl was still inside.

Without hesitation, Bostic ran back into the house and up the stairs where the other children were, but the child wasn’t there. He would have to make it downstairs to reach her.

"He described looking down the stairwell into a ‘black lagoon’ of smoke and thought it impossible to go that way," police said. "He knew he was there to get that child out, and even though the fire and smoke downstairs frightened him, he would not quit.

"Nicholas wrapped his shirt around his mouth and nose and plunged into the blackness ... [he]crawled on the ground, feeling in front of him with his hands, and used the child’s cries to help him locate her in the darkness."

After he found the child, he rushed back up the stairs and punched through a glass window, but the child’s leg got caught in a cord attached to the blinds. He had to untangle the cord before he leaped from the second-floor window and made sure to land on the side where he wasn’t holding the child. He was able to pick himself up off the ground and carry her to safety. 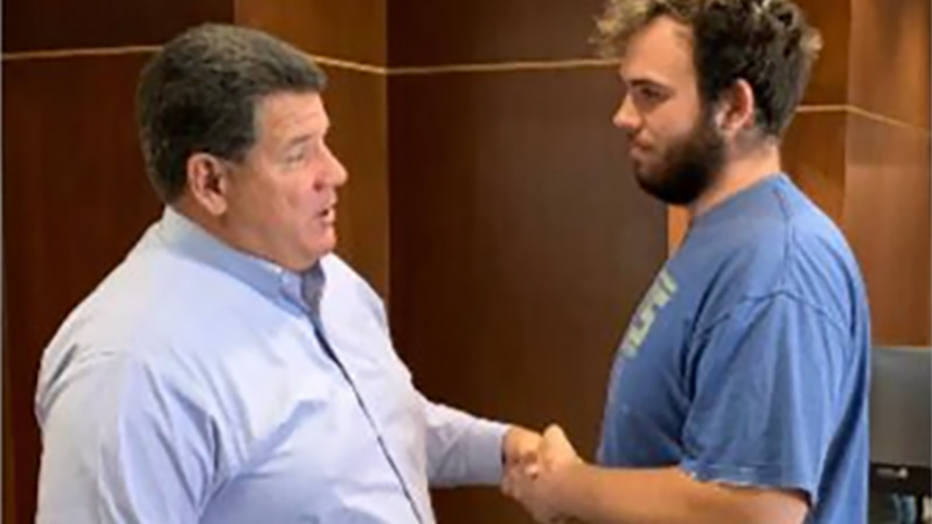 Miraculously, the child was mostly uninjured.

Bostic suffered from severe smoke inhalation and a serious cut on his arm. He later had to be flown to Indianapolis for treatment.

RELATED: From burn survivor to ‘superdog’: Taka’s journey inspires patients near and far

Video from the scene shows Bostic on the ground injured, while asking repeatedly if the child was OK.

"His selflessness during this incident is inspiring, and he has impressed many with his courage, tenacity, and steadfast calmness in the face of such perilous danger," police said.

The city will recognize Bostic at the Lafayette Aviators’ baseball team’s National Night Out event on Aug. 2. Proceeds from the game’s ticket sales will go toward Bostic’s gofundme page to help in his recovery.