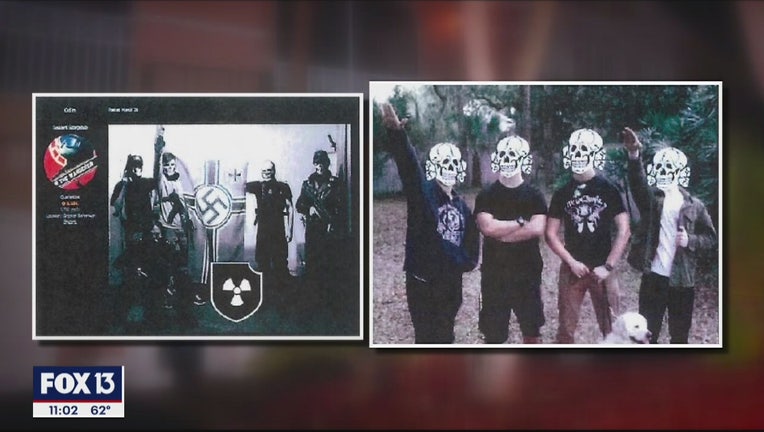 The extremists are apparently part of the Atomwaffen Division, which the Anti-Defamation League says is a neo-Nazi group created in 2016 by members of a now-defunct white supremacist online chatroom.

Agents with the Federal Bureau of Investigation and local law enforcement officers in Seattle, Tampa, Houston, and Phoenix carried out the arrests of:

Atomwaffen Division’s presence in the Tampa Bay area did not begin with Taylor Ashley Parker-Dipeppe. The FBI says he actually replaced a former leader in the group, who went to jail for plotting to use explosives to harm civilians, nuclear facilities, and synagogues, according to federal prosecutors.

However, what first led law enforcement to the group was a double murder at a Tampa Palms condo complex back in May 2017. 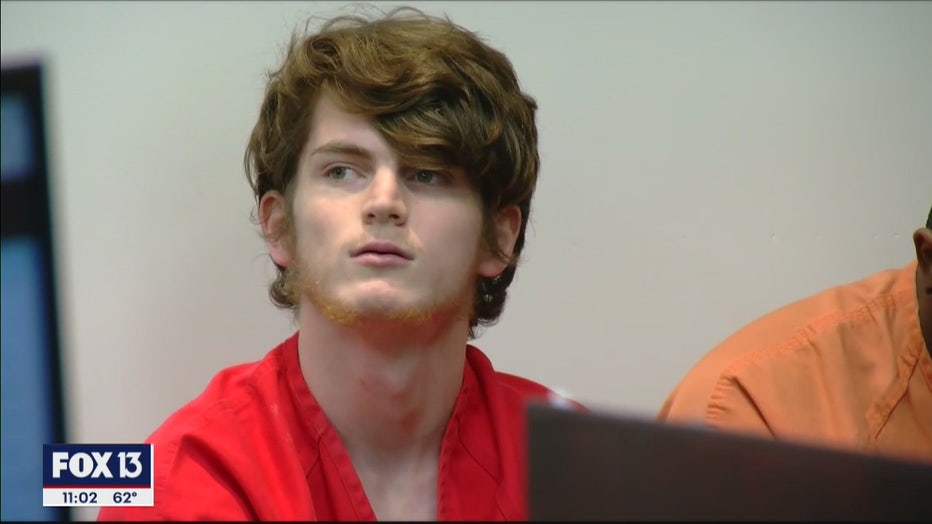 That evening in May, Tampa officers rushed to the Green Planet Smoke Shop on Amberly Drive after employees called 911 to say a resident of the nearby condo complex was inside their shop and had admitted he just killed two of his roommates.

When police arrived, they arrested the man, 18-year-old Devon Arthurs, who allegedly took them to the bodies of 22-year-old Jeremy Himmelman and 18-year-old Andrew Oneschuk.

Arthurs told officers he killed the pair because they disrespected his newly adopted Muslim faith. The former Atomwaffen member also told officers his roommates were plotting to carry out acts of domestic terrorism involving explosives.

Arthurs has been found unfit to stand trial and is in a mental health institution. Federal prosecutors hold out hope he will one day face the court for the alleged murders.

During a status hearing in February 2020, Arthurs appeared to choke himself to the point of unconsciousness. Despite the prosecution's request to move forward with a trial, Arthurs was sent back to a facility where he could receive treatment for his mental health.

Defendant ‘involuntarily’ chokes himself in court

Psychiatrist Dr. Michael Maher, who evaluated Devin Arthurs, says an involuntary reflex causes the murder defendant to choke himself to the point of unconsciousness.

During the investigation into the double murders, Arthurs showed officers the belongings of his third roommate, 21-year-old Florida National Guardsman Brandon Russell, who was out of town at the time of the murders.

Among Russell's possessions were bomb-making materials, weapons, ammunition, a picture of Oklahoma City bomber Timothy McVeigh, Nazi and white supremacist propaganda on his computer, and texts popular with neo-Nazis including Adolf Hitler's “Mein Kampf” and “The Turner Diaries.” 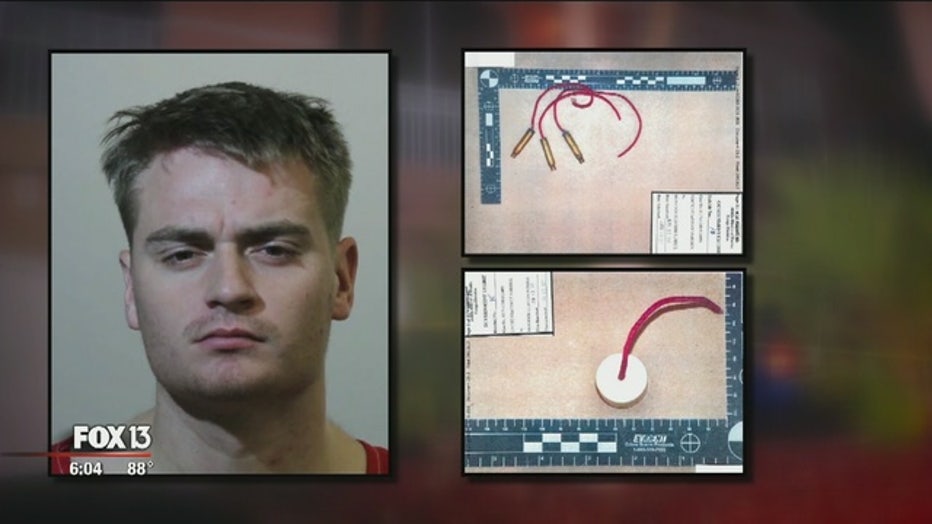 After about a year of court proceedings, Russell pleaded guilty to explosives charges and is now serving a five-year sentence.

When investigators began investigating Russell, they discovered him to be the apparent leader and founder of the Atomwaffen Division.

After Russell’s arrest, investigators say the remaining members of Atomwaffen chose new leadership: a Houston, Texas resident referred to only as “J.D.” in Wednesday’s arrest affidavit, and Kaleb Cole of Montgomery, Texas.

In the coming months, the group began to reorganize. They formed a relationship with the person who wrote the book “Siege,” which the FBI says is the basis for the current Atomwaffen ideology.

They hosted a "Death Valley Hate Camp" in Las Vegas, Nevada, in January 2018. At the camp, investigators say members trained in hand-to-hand combat and firearms and created neo-Nazi propaganda videos and pictures of themselves posing with weapons.

Missing from the camp was a California-based member who was arrested for the murder of an openly gay Jewish college student.

After the camp, the group posted propaganda videos on Youtube. The videos allegedly showed a half-dozen Atomwaffen members wearing military-style clothing, facemasks, and carrying long guns while conducting “paramilitary style training” and shooting at a gravel pit attached to an abandoned cement factory in Washington state, known as Devil's Tower.

The Seattle Times discovered the videos and published an article in February 2018, which included the identities of several Atomwaffen members as well as information about the app members used to communicate with one another.

Investigators say some of the members began trying to conceal themselves, deleting online profiles, quitting their jobs, and even moving from their homes.

Following the message was about a year of additional meetings, private chat groups, run-ins with journalists, and arrests for firearms violations.

In November 2019, members of the group began a group chat where they allegedly coordinated their plan to intimidate and threaten journalists. In the group were Kaleb Cole, Taylor Ashley Parker-Dipeppe, Cameron Brandon Shea, and Johnny Roman Garza.

They named their operation Erste Saule, “named after the first pillar of stat[e] power, AKA the media,” according to the arrest affidavit.

“We will be postering journalists houses and media buildings to send a clear message that we too have leverage over them… The goal, of course, is to erode the media/states air of legitimacy by showing people that they have names and addresses, and hopefully embolden others to act as well.”

Investigators believe Cole and Shea were the primary organizers of the operation. For the next month, investigators say the group discussed the timing and execution of their plot to deliver intimidating materials to their targets.

In their online group chat, they went over details like where to buy stamps, how to record video while carrying out their missions, and the best methods to print posters, according to legal documents.

In late January 2020, the group began to carry out its plan.

The FBI says it was contacted Jan. 29 by a Seattle, Washington reporter, as well as an employee of the Anti-Defamation League's Pacific Northwest Regional Office. Both had received the threatening posters in the mail.

Another employee of the Anti-Defamation League's Pacific Northwest Regional Office contacted the FBI on Feb. 5 to report they received a poster, but had been on vacation when it was delivered. 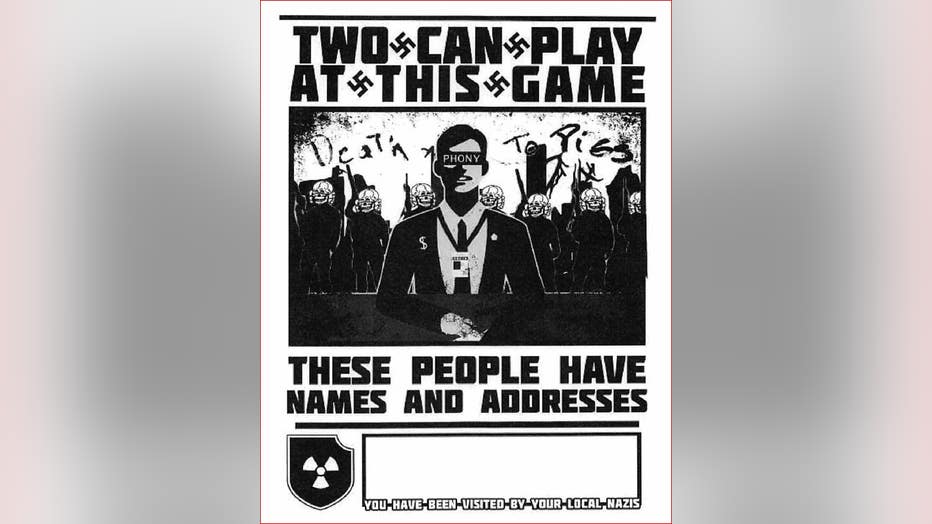 The events in Florida

From the criminal affidavit, the FBI says on January 24, 2020, law enforcement was watching Parker-Dipeppe as he and a woman went to the Goodwill Springhill Super Store, where they bought a tan baseball hat, a hooded sweatshirt, and a pair of black sunglasses. They then went to Walmart where they bought tape.

On January 25, 2020, agents watched Parker-Dipeppe drop the woman off at an apartment in Tampa and then pick up a man in St. Petersburg, where the men went to Walmart to buy a black sweater and pants, before driving back to Tampa. 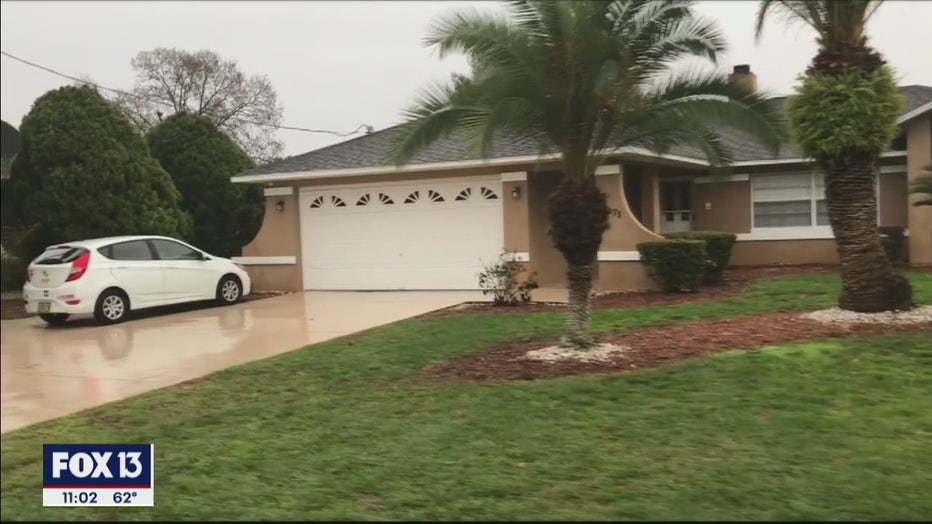 Agents watched as the pair allegedly put up a poster under the front bedroom window of a residence.

The poster said, “We Are Watching.”

However, the pair got the wrong address. Their intended target lived somewhere else. 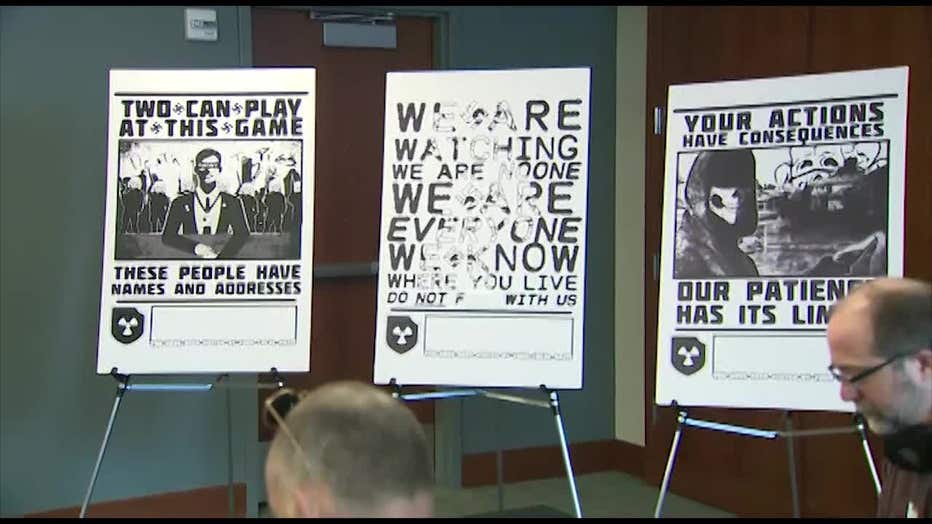 The events in Arizona and the arrests

In Arizona, Garza was able to locate his alleged targets and deliver a poster titled “Your Actions Have Consequences.”

READ: Arizona man among members of 'violent extremist group' arrested by the FBI

The four people arrest are accused of being involved in an effort to threaten and intimidate journalists and activists.

Shea, Cole, Parker-Dipeppe, and Garza were all arrested and charged with conspiracy, in violation of Title 18, United States Code, Section 371.

The identities of the group's targets were not released to the public.

FBI Tampa Special Agent in Charge Michael McPherson said the arrests were "proof the FBI in Tampa and our Joint Terrorism Task Force will work tirelessly to ensure communities are rid of hate-inspired groups whose goal is to fuel intimidation and violence,”

The assistant director for counterterrorism at the FBI, Jill Sanborn added, “Today’s announcement serves as a warning to anyone who intends to use violence as intimidation or coercion to further their ideology that the FBI remains steadfast in our commitment to protect Americans from domestic terrorism.”