Ecologists estimate that 480 million mammals, birds and reptiles have been killed since September in the country’s catastrophic wildfires.

SYDNEY - Nearly half a billion animals are believed to have died as a result of Australia’s catastrophic wildfires, experts say.

Ecologists from the University of Sydney estimate a staggering 480 million mammals, birds and reptiles have been killed since September, news.com.au reported. 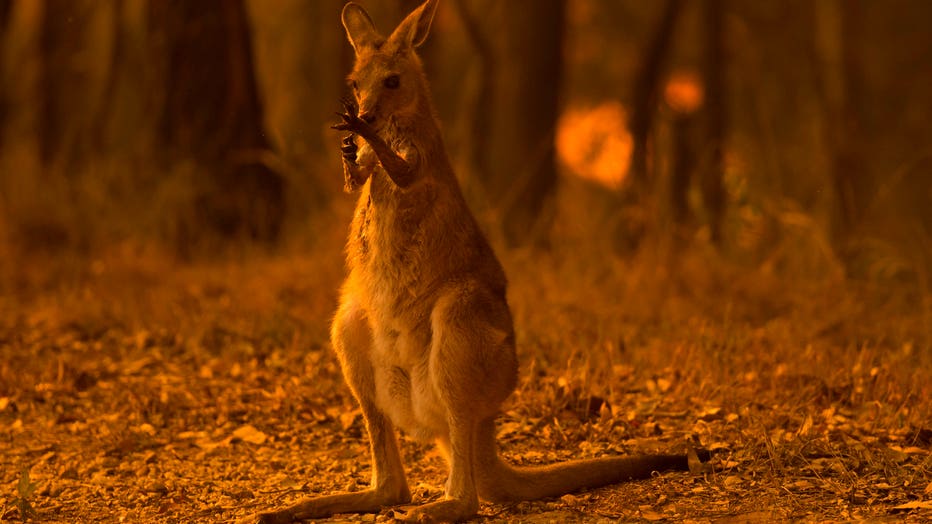 A wallaby licks its burnt paws after escaping a bush fire on Nov. 12, 2019 near the township of Nana Glen on the Mid North Coast of New South Wales, Australia. (Photo by Wolter Peeters/The Sydney Morning Herald via Getty Images)

About 5 million hectares — or 12.35 million acres — of land have burned nationwide over the past few months, with at least 17 people dead and more than 1,000 homes destroyed.

The crisis "will continue to go on until we can get some decent rain that can deal with some of the fires that have been burning for many, many months,” Prime Minister Scott Morrison said.

On Wednesday, more than 130 fires were raging across New South Wales and Victoria, having burned millions of acres of national parks, news.com.au reported.

Experts say koalas have been among the hardest hit of Australia’s native animals with up to 8,000 believed to have been killed. The marsupials are slow-moving and only eat leaves from the eucalyptus tree, which are filled with oil — making them highly flammable, according to news.com.au.

Nature Conservation Council ecologist Mark Graham told parliament during a hearing last month that the animal death toll could actually be much higher.

“The fires have burned so hot and so fast that there has been significant mortality of animals in the trees, but there is such a big area now that is still on fire and still burning that we will probably never find the bodies,” Graham said, according to news.com.au.

Science for Wildlife executive director Dr. Kellie Leigh told parliament during the hearing that there were no resources or procedures to save koala populations threatened by fire in the Blue Mountains of Australia’s New South Wales.

“We’re getting a lot of lessons out of this and it’s just showing how unprepared we are,” Leigh said, according to news.com.au.

“There’s no procedures or protocols in place — even wildlife carers don’t have protocols for when they can go in after fire.”

Environment Minister Sussan Ley said the actual animal death toll would not be known until “the fires have calmed down and a proper assessment can be made,” news.com.au reported.