A reality TV star and prominent Dallas developer is facing several sexual assault charges out of Texas and Dallas.

DALLAS - A reality TV star and prominent Dallas developer is facing several sexual assault charges out of Texas and Dallas.

He's accused of sexually assaulting three teenagers, and investigators found video evidence against him as well.

The 63-year-old told TMZ he is innocent. Hutchinson is a prominent developer and the owner of Virgin Hotels Dallas. He was also featured on the Lifetime series "Marrying Millions" along with his 23-year-old fiancé.

According to an arrest warrant affidavit, a 17-year-old girl said Hutchinson touched her inappropriately. She said she had been living with his family in Highland Park so she could finish out the school year after her family moved.

Hutchinson’s 13-year-old biological son, the 16-year-old daughter of his ex-wife and another 17-year-old female that he has legal guardianship of also live in the home.

The teen told police Hutchinson would often give them alcohol and allow them to smoke marijuana.

"On one occasion, [she] was intoxicated and fell asleep on the couch. She woke to William Hutchinson digitally penetrating her vagina with his finger without her consent," the affidavit states. "[She] stated she was frozen in fear and he only stopped when he noticed blood on his finger. He asked her ‘Did I do that?’ to which she informed him she was on her period."

Investigators say they obtained video from another minor in the household claiming similar behavior at his home in Laguna Beach, California.

The Orange County DA’s Office also announced charges against Hutchinson for sexually assaulting two 16-year-old girls vacationing with him in Laguna Beach, California, including raping one of the teenagers while she was unconscious.

Hutchinson has now also been charged with one felony count of rape of an unconscious person and five misdemeanor counts of sexual battery for incidents involving two 16-year-old girls.

A lawsuit seeking over $1 million in damages from another alleged victim was filed in Dallas County on Friday against Hutchinson, his company Dunhill Partners and Virgin Hotels Dallas. 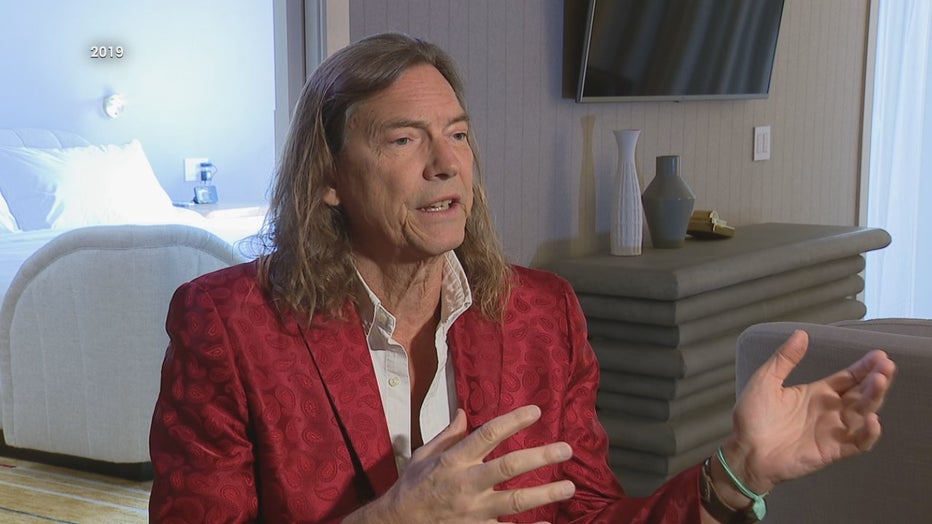 Michelle Simpson Tuegel is representing the young woman in that suit and says her client, who is a college student, spoke with Hutchinson hoping for career advice and a business connection.

"These acts of violence are rarely isolated," she said. "People who are inclined to be predatory with young, vulnerable women, particularly under the heavy influence of alcohol or substances, rarely do that one time."

In June of 2020, the lawsuit says Hutchinson met with the young woman at the Virgin Hotel in Dallas and ordered numerous alcoholic beverages to the point she could not walk straight, eventually urging her to go to his apartment nearby.

The lawsuit states: "Hutchinson then pushed Jane Doe down on the bed. Upon forcing Jane Doe into the bed, Hutchinson attempted to force himself onto her."

Simpson Tuegel says the woman recorded part of the unwanted encounter on her cell phone.

"You can hear in the recording her saying, ‘Get your hands off of me!’ And him saying, ‘Are you a virgin? You're a virgin,’" she said.

Simpson Tuegel says since the lawsuit was filed, they’ve been made aware of four victims so far.

So far, Hutchinson is not facing any criminal charges for the allegations brought up in the lawsuit.

Trial attorney Rob Miller is not involved in these cases.

"You've seen it with celebrities. Once the first domino falls, once the first young lady or the young man comes forward and says this happened to me, then all the other folks that were too afraid to do that, then they start coming forward," he said.

Miller says in a civil case the burden of proof is less than in a criminal case.

Miller says the victim’s recordings could play a pivotal role in the case as well as there appears to be multiple victims with similar stories.

"We live in a YouTube age. People want to see video. People want to hear recordings," he said. "And if there are recordings that are incriminatory, then what happens is the victim is in a much better position because there's objective evidence and the jury is not just relying on their testimony alone."

Hutchison told TMZ in a statement: "I’m innocent of this charge and accusation. Anyone who knows me in this city knows that I am not capable of assault, sexual or otherwise. Hopefully, all of my colleagues and friends will give me the benefit of the doubt until I prove my innocence in court."