4 people wounded in a dog attack in Pico Rivera

Four people, including a one-year-old girl, were wounded in a dog attack in Pico Rivera.

PICO RIVERA, Calif. - Four people, including a one-year-old girl, were injured in a dog attack in Pico Rivera, authorities said.

Around 10:15 p.m. Sunday, firefighters were called to a home located in the 9600 block of Homebrook Street, located near the intersection of Washington and Rosemead boulevards. Fire officials said several people were injured in a pit bull attack and family members told FOX 11’s Mario Ramirez it all happened in just a few minutes. 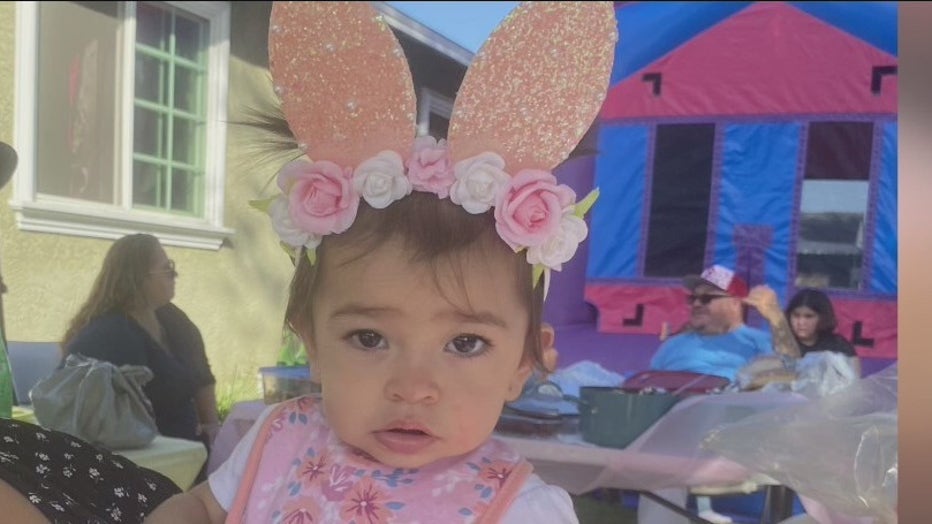 All four victims were taken to a hospital and required stitches. The toddler, named Ruby Ann Cervantes, was rushed to the trauma center at LAC + USC Medical Center. She underwent surgery and will undergo a second surgery for a hip fracture before she is moved to the ICU. Officials say she suffered wounds to her shoulder, legs, and ankles.

The girl’s mother, Jamie Morales, returned to the home after she was released from the hospital and said she fought off the dogs to protect her daughter.

"I stabbed him to get him off of my daughter. It was either him or my daughter and I chose my daughter. I did what I had to do because he wouldn’t let go," Morales, who was bit in the face and arm while trying to protect her daughter, said.  "I feel really bad but I had to. I’m pretty sure anyone would have done it."

Morales said her sister and mother were also injured trying to stop the dogs from attacking the toddler.

"He had my granddaughter by the leg and when I tried to pull him off he bit my hand," said Margaret Morales. "The dog got her in the leg, her ankle and shoulder. Right now she’s at LAUSC hospital and from there she’s going to go to the ICU. She’s strong."

"The dogs are good dogs. We just had them bathed yesterday. I was asleep and my daughter heard the commotion," Margaret Morales added.

The blue nose pit bulls had been in the home for about four months and according to family members, had never displayed any aggressive behavior. They say the dogs are normally kept in the backyard of the home, but were inside at the time of the attack.

Officers from the Southeast Area Animal Control Authority removed the dogs from the home.  One of the pit bulls was seen carried out of the home in a plastic bag after it was stabbed multiple times.

According to data from the U.S. Centers for Disease Control, more than 4.5 million people are bitten by dogs each year in the United States and at least half of those victims are children.