Hundreds of people were detained on November 15 during a rally in Minsk, Belarus, honoring the death of anti-government protester Roman Bondarenko, local media reported.

KYIV, Ukraine - A human rights group in Belarus said more than 900 people were arrested Sunday in protests around the country calling for authoritarian President Alexander Lukashenko to step down.

The demonstrations continued the wave of near-daily protests that have gripped Belarus since early August. In the capital Minsk, police wielded clubs and used tear gas and water cannons to disperse thousands of demonstrators.

The Viasna human rights organization reported detentions at demonstrations in other cities, including Vitebsk and Gomel. It said the nationwide arrest total was at least 928 and that some of those detained were beaten by police. 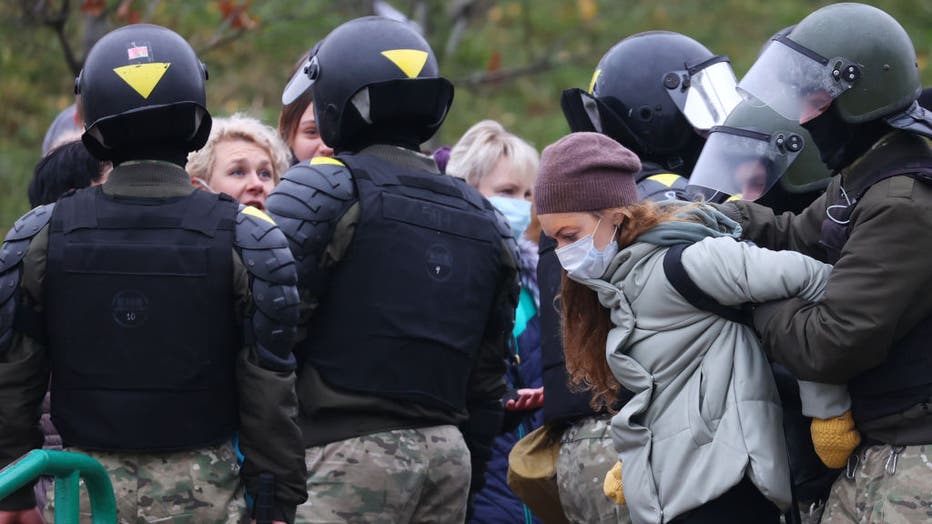 FILE - Law enforcement officers detain participants in the March of the Brave protest event in the city center. (StringerTASS via Getty Images)

RELATED: Over 100,000 march in Belarus after authoritarian leader wins 6th term in office

Many of the demonstrators carried placards in commemoration of Raman Bandarenka, an opposition supporter who died Thursday after reportedly being beaten in police detention.

A wide wave of protests, some attracting more than 100,000 people, broke out following the Aug. 9 presidential election that official results say gave Lukashenko a sixth term in office. The opposition and some poll workers say the results were manipulated.

Lukashenko, who has suppressed opposition and independent media during 26 years in power, refuses to negotiate with the opposition and alleges the protests are incited by Western countries.