What to know about mail voting

The ongoing COVID-19 pandemic is pushing states to ramp up their mail in voting efforts for the 2020 election, but the rules vary from state to state.

LOS ANGELES - Early voting by Americans in states across the country ahead of Election Day on Nov. 3 has topped 85 million, according to an updated tally Thursday by the U.S. Elections Project at the University of Florida.

According to the tally, 85,755,756 nationwide had so far voted in the election as of Oct. 30, and in some states, voters had already broken records from the previous presidential election in 2016.

In Texas, voters had already cast more ballots ahead of Election Day than they did in all of 2016. More than 9 million ballots had been cast as of Friday morning in the nation's second most-populous state, exceeding its 8.9-plus million votes four years ago, according to an Associated Press tally of Texas' early voting data.

President Donald Trump carried Texas against Hillary Clinton in 2016 by a comfortable 9 points, even though it was the smallest margin of Republican victory since 1996.

Early in-person turnout in Georgia on Oct. 12 surged more than 40 percent above the first day of early voting in 2016's November election. The state also saw record voter registration as of October.

States such as Minnesota, South Dakota, Wisconsin, Vermont, Virginia and Florida have already reached 20% or greater than their 2016 total vote turnout, according to the U.S. Election Project. 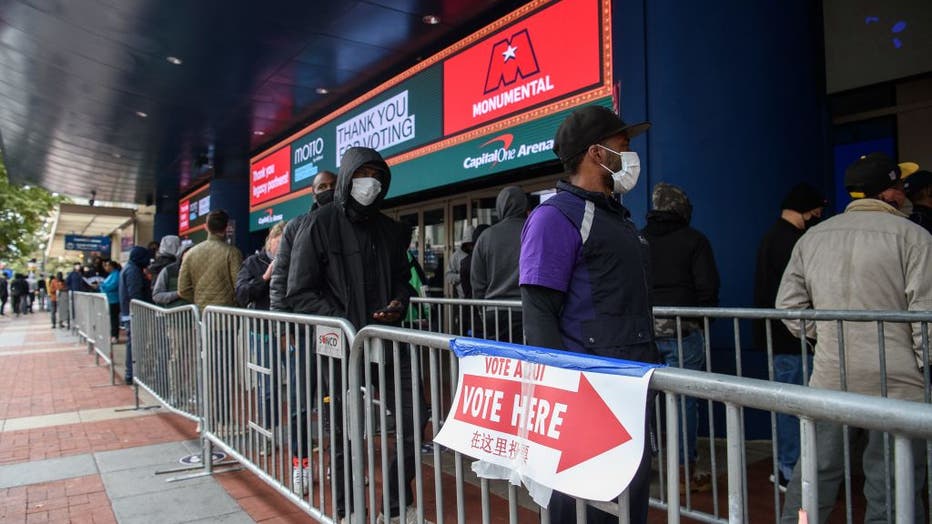 People wait in line to cast their ballot outside a polling station in Washington, DC, on October 30, 2020 during early voting ahead of the November 3 general election. (Photo by NICHOLAS KAMM/AFP via Getty Images)

Early in-person voting began Thursday across Oklahoma. Polls are open from 8 a.m. to 6 p.m. at most of the 77 county election board offices on Thursday and Friday, and from 9 a.m. to 2 p.m. on Saturday.

In Tulsa, early voting was taking place at the minor league baseball stadium, ONEOK Field, to accommodate more voters and allow for better social distancing as the coronavirus continues to surge in Oklahoma and beyond.

Even before early in-person voting began, more than 234,000 Oklahomans had already cast absentee ballots by mail, more than twice as many who voted by mail during the last presidential election in 2016.

Currently, both candidates are trying to make inroads in states that could help secure a path to victory, but the dynamics of the race are remarkably stable. Biden enjoys a significant advantage in national polls, while carrying a smaller edge in battleground surveys.

Political scientists and experts believe the record-setting early voter turnout is due largely in part to the COVID-19 pandemic and a desire to continue to adhere to social distancing guidelines, but energy among voters in a charged election plays a role as well.

Dr. Michael McDonald, a political science professor at the University of Florida as well as the key researcher for the U.S. Election Project, believes the reason for the influx of early voters is three-fold:

“We've never seen this number of people cast ballots so early in the election. There are three driving factors here: One is simply that states have relaxed their laws. Maybe it was through changes that were already in place or as an emergency for the pandemic,” McDonald told NPR during the first week of early voting.

“And in the latter case, we've seen many people requesting mail ballots and voting in-person early in order to socially distance. The other big factor, though, that's going on here is that there are lots of people who really are enthused to vote, and they're casting their ballots early,” McDonald said.

The Associated Press and Catherine Park contributed to this report.