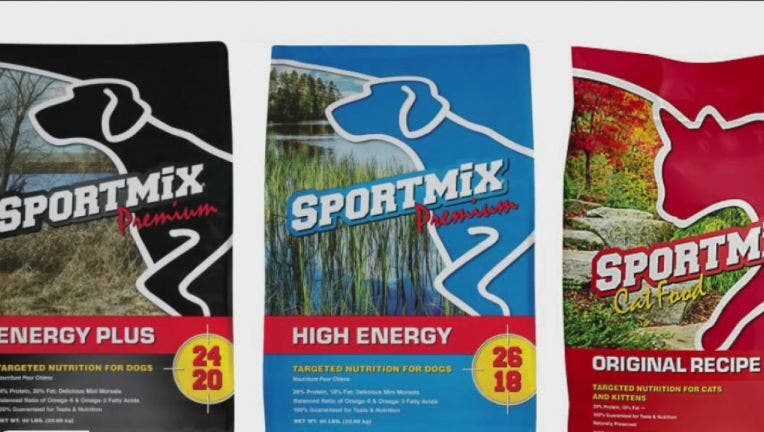 WASHINGTON - Hundreds of pets have died and others have been sickened after eating recalled pet food manufactured by Midwestern Pet Foods, according to the Food and Drug Administration's (FDA) updated recall notice.

As of Jan. 21, the FDA became aware that more than 110 dogs died and over 210 others fell ill after consuming food from the company's Oklahoma plant "that may contain potentially fatal levels of aflatoxins."

However, as new information becomes available, "case counts and the scope of this recall may expand," the FDA said.

Earlier this month, the company expanded its recall "out of an abundance of caution" to include all pet food products containing corn that were manufactured in the company’s Oklahoma manufacturing plant and have an expiration date on or before July 9, 2022. Overall, this recall includes 19 products that "may still be on store shelves, online, or in pet owners’ homes," according to the FDA.

In December, Midwestern initially issued a recall of nine different lots of Sportmix dry cat and dog food following reports that at least 28 dogs died and eight were ill after consuming the recalled pet food.

By conducting product tests, the Missouri Department of Agriculture discovered "very high levels" of the toxin in multiple samples at the company's Oklahoma plant. However, not all of these cases have been officially confirmed as aflatoxin poisoning, the FDA said.

Aflatoxin is a mold byproduct that has the ability to grow on corn and other grains, which are commonly used as ingredients in pet food. At very high levels, "aflatoxins can cause illness and death in pets," the FDA said.

The FDA and Midwestern Pet Foods are urging pet owners to safely discard the products due to toxin, which can be present even if the mold isn't visible, according to the agency.

Pets that have been poisoned by the toxin may seem sluggish and have a loss of appetite. They may also experience vomiting, jaundice (yellowish tint to the eyes or gums due to liver damage) and/or diarrhea, the FDA said. In some cases, pets may also suffer from liver damage without even showing symptoms.

Unlike people, pets are "highly susceptible" to aflatoxin poisoning because they generally eat the same food, according to the FDA.

"If a pet’s food contains aflatoxin, the toxin could accumulate in the pet’s system as they continue to eat the same food," the FDA said.

Midwestern is also urging customers to wash and sanitize any pet bowls and areas where the food was stored. Retailers are encouraged to contact customers who have purchased the affected products.

Midwestern announced in a statement on its website that it has never experienced a recall in its nearly 100-year history and has been "committed to ensuring" that its products are safe.

"We continue a thorough review of our facilities and practices in full cooperation with FDA in an effort to better serve our customers and pet parents who put their trust in us," Midwestern said.

The investigation into the matter is ongoing.

The FDA will continue to work with veterinarians and state partners to follow up on suspected cases of aflatoxin poisoning and plans to conduct follow-up activities at the manufacturing facility.