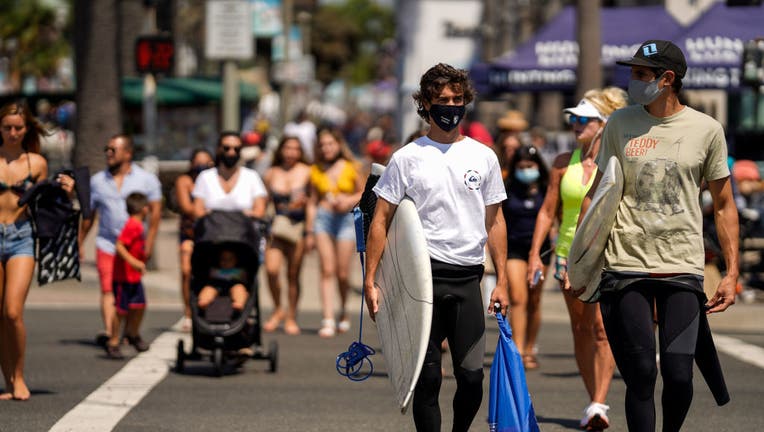 Governor Gavin Newsom announced that Orange County officially moved from the Purple Tier to the Red Tier in the state's new color-coded system.

San Diego was initially the only Southern California county in the "red."

Businesses that are allowed to reopen and operate indoors with modifications include:

• Cultural ceremonies (limited to 25% capacity or 100 people, whichever is fewer).

• Places of worship (indoor activities limited to 25% capacity or 100 people, whichever is
less).

•Dine-in restaurants (indoor capacity limited to 25% or 100 people, whichever is less and must close by 10 p.m. nightly).

•Weddings (indoor ceremonies only; limited to 25% capacity or 100 people, whichever is fewer).

The tier system has four stages and is color-coded. Santa Clara County, Santa Cruz County, Amador County, and Placer County also moved from the Purple Tier to the Red Tier on Tuesday. However, Orange and San Diego counties are the only counties in Southern California that have been moved to the second phase of reopening.

Counties must remain at each tier for a minimum of 21 days.

Fratellino's Italian Restaurant in Brea reopened its doors to customers to dine indoors on Tuesday following the announcement.

The restaurant has been around for 20 years and is popular in Orange County.

"It's nice to be able to open again, even though it's 25 percent of the capacity, but it's nice to be able to offer this to our customers, they've been waiting for it for a long time. It's especially nice now that it's so hot and with dust and all the stuff that is in the air because of the fires so we're very happy to be open again," said Cesar Lomeli, the co-owner of the restaurant.

Newsom announced on Tuesday that Orange County will move into the second stage of reopening.

Gabriella Lomeli, who is married to Cesar, and is the co-owner of the restaurant, was also elated to be able to reopen.

"I'm almost in tears to come back. I'm very emotional. I'm sorry after all of this work and patience, we're thankful for all the support we have," she said.

The restaurant has a fan and air conditioning system to filter the air, and offers PPE and hand sanitizer to keep patrons safe.

"We'll be able to survive this crisis. I believe it," said Cesar.

Customers like John Costello are happy to be able to dine indoors.

"It's about time he [Governor Newsom] got on board with what this state needs. We need to have businesses open so people can go to places and do things. We need to be able to deal with this virus in a significant way and this is a good way to do it," he said.

Regal is reopening 13 of its theaters in Orange County following the announcement.

The theaters will have modifications, click here for info.

The State’s new website, www.COVID19.ca.gov, will track the metrics, show an interactive map and list business sectors open by each county.

Governor Newsom said seven other counties are being monitored for a possible tier change, but also warned about spread during the Labor Day weekend.

According to Gov. Gavin Newsom, the state's COVID-19 positivity rate over a 7-day period is 3.8% and 4.3% over a 14-day period, which both indicate improvement. He also noted hospitalizations for virus patients dropped 24% over the last 14 days.

Along with an update on the state's response to the coronavirus pandemic,  Newsom addressed 2020's historic wildfire season saying he has "no patience for climate change deniers" during his first update since Labor Day weekend on Tuesday.

He described the state's multiple firefights as "challenging," during what has been an unprecedented year.

Newsom said excessive heat and high wind events are starting to become a part of "the new normal" in the Golden State.

Since August 15 alone, over 900 wildfires have ignited statewide and blackened 1.8 million acres. Of the 900 wildfires, 25 were major and 42,200 Californians have been evacuated, Newsom said.

During 2020’s historic wildfire season, 14,000 firefighters have been deployed to extinguish the alarming number of fires. Eight people have lost their loves and 3,400 structures have been lost.

He addressed active fires happening statewide, including the massive Valley fire in San Diego that has scorched 17,000 acres and is 3% contained.

In San Bernardino County, authorities said the El Dorado Fire burning in Yucaipa began after a smoke-generating pyrotechnic device was used during a gender reveal photoshoot. The governor said the state is investigating, also expressing his frustration that 90% of fires are man-made.