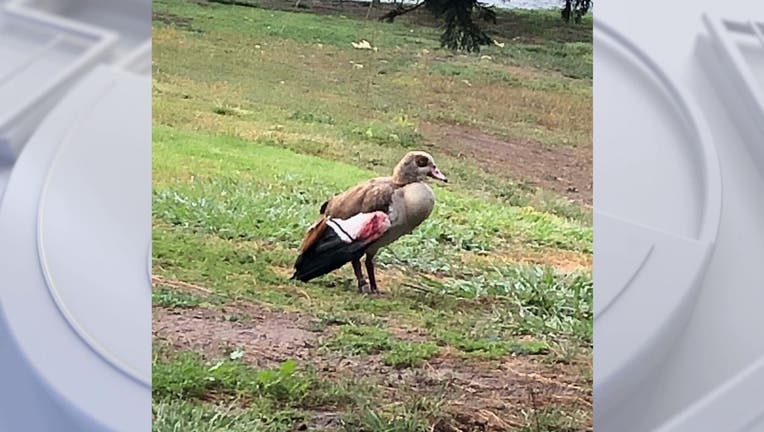 Another bird shot by a pellet gun at TeWinkle Park in Costa Mesa. (Photo via Wetlands & Wildlife Care Center of Orange County)

COSTA MESA, Calif. - Even more birds have died after being shot by pellet guns in TeWinkle Park in Costa Mesa, according to police.

In late April, Wetlands & Wildlife Care Center of Orange County reported that four ducks — one male mallard, two Muscovy ducks, and one Pekin duck — were found dead in the park after being shot multiple times. At the time, the center said that more were missing and feared dead.

Since then, the Costa Mesa Police Department has been investigating the shootings. According to the department, even more ducks and geese were found shot in the park over the weekend and taken to the Wetlands & Wildlife Center over the weekend for treatment.

The x-ray of Grace the Muscovy duck, shot and killed at TeWinkle Park in Costa Mesa in April. (Photo via Wetlands & Wildlife Care Center of Orange County)

Debbie McGuire with the wildlife center told FOX 11 at the time the first birds were found dead that "The Wetlands and Wildlife Care Center… sees human-caused atrocities like this almost every day. But the magnitude of this senseless shooting makes it one of the more solemn events we have witnessed in recent memory."

The Costa Mesa Police Department continues to investigate these shootings. Anyone with information is asked to call 714-754-5252.