The newest internet trend, the milk crate challenge, is seriously injuring some people who try to pull off the stunt.

A dangerous Milk Crate Challenge trend emerged on social media last week and TikTok is doing its part to stop the spread.

TikTok users searching the hashtag #MilkCrateChallenge will only find an error message. Since February 2020, TikTok has urged users to avoid unsafe trends.

"TikTok prohibits content that promotes or glorifies dangerous acts, and we remove videos and redirect searches to our Community Guidelines to discourage such content. We encourage everyone to exercise caution in their behavior whether online or off," a TikTok spokesperson said in a statement.

TikTok users have started using alternate hashtags to share videos of the challenge, which requires participants to stack milk crates in the shape of a triangle and walk across the top of them until they reach the other side.

Most attempts result in failure. The crates begin wobbling as participants reach the peak of the structure, resulting in falls from dangerous heights.

Doctors have pleaded with the public not to take part in the challenge because falling from these heights can lead to serious, near-fatal injuries. And even beyond self-preservation, doctors don’t want these injuries putting any more strain on the health care system that’s already being stressed by the COVID-19 pandemic.

"Everyone needs to do their part in supporting first responders and health-care providers, and that involves not partaking in challenges like this one that are putting additional strain on the system," Dr. Shawn Anthony told The Washington Post.

Even so, the threat of broken bones, concussions or paralysis has done little to deter those who participate. 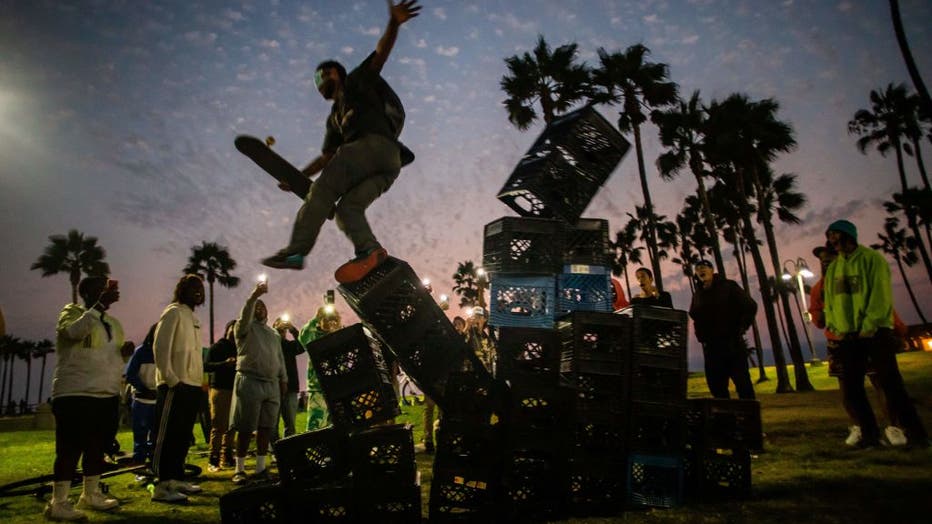 A man falls down from a pyramid of milk crates while he participates in the Milk Crate Challenge, on Aug. 24, 2021, in Venice, California. (Photo by APU GOMES/AFP via Getty Images)

A New York City police officer got in on the challenge, nearly making it to the other side before tumbling down. According to the New York Post, the NYPD released a statement saying, "We encourage all our officers to engage the community in a positive and proactive manner."

The officer appeared to be limping at the end of that footage.

Even the Indianapolis Colts’ mascot Blue took part, successfully completing the challenge before knocking over the crate in celebration.

Late-night comedian Conan O’Brian weighed in on the challenge, joking that he’d wait for FDA approval before taking part.

The FDA responded in jest, "Although we regulate milk, we can't recommend you try that. Perhaps enjoy a nice glass of 2% and return all those crates to the grocery store?