WASHINGTON - Former Vice President Mike Pence said on Monday that the Department of Justice should not bring any charges against President Trump related to the Jan. 6 attack on the U.S. Capitol.

"How many times did Adam Schiff say that there was evidence of collusion with Russia? Two and a half years we listened to Adam Schiff talk about evidence that he had seen that was never there," Pence told "America’s Newsroom" hosts Dana Perino and Bill Hemmer.

TRUMP REFERRED TO DOJ FOR CRIMINAL PROSECUTION BY JAN. 6 COMMITTEE

Rep. Schiff said Sunday he believes the "evidence is there" to pursue a criminal case against Trump.

"Congress has no formal role in Justice Department decisions and they can make recommendations today," Pence responded, adding the committee has a "partisan taint" that has led to many Americans ignoring the hearings.

"But when it comes to the Justice Department's decision about bringing charges in the future, I would hope that they would not bring charges against the former president … As I wrote in my book, I think the president's actions and words on January 6th were reckless. But I don't know that it is criminal to take bad advice from lawyers. And so I hope the Justice Department is careful." 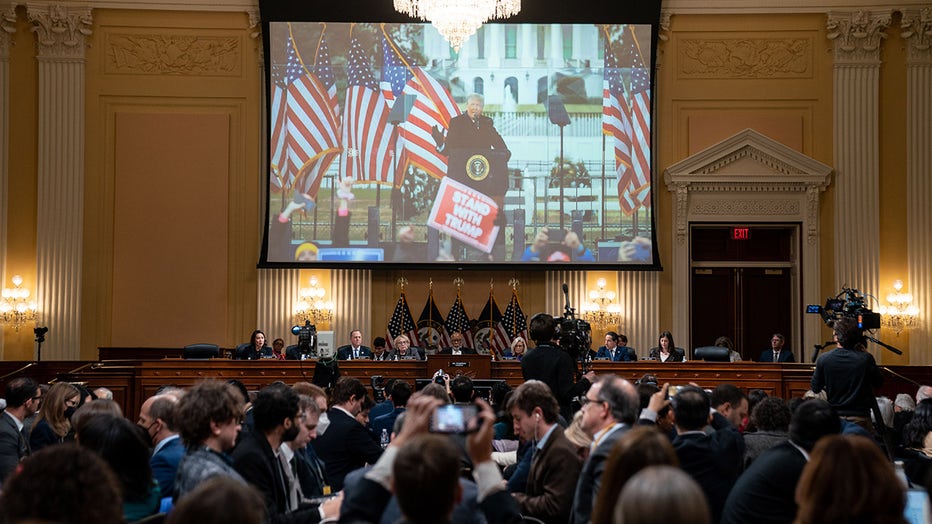 An image of President Donald Trump is displayed on a screen as the House Select Committee to Investigate the January 6th Attack on the United States Capitol conducts its final hearing in the Cannon House Office Building on Monday, Dec. 19, 2022 in Wa

The first referral recommended by the committee is for Trump's obstruction an official proceeding of Congress. The committee will also refer Trump to DOJ for conspiracy to defraud the federal government, making a false statement and inciting, assisting, or aiding and comforting an insurrection.

REPUBLICANS PLANNING TO RELEASE OWN REPORT ON JAN. 6 SECURITY FAILINGS

In what is expected to be its final meeting on Monday, the House Select Committee to Investigate January 6 said it will formally ask the DOJ to pursue charges after a nearly 18-month probe into the former president’s involvement in the activities that lead to the Capitol breach on January 6, 2021.

Pence said that such an indictment against a former U.S. president would be "divisive."

"I hope the Justice Department understands the magnitude of the very idea of indicting a former President of the United States. I think that would be terribly divisive in a country at a time when the American people want to see us heal. At this time of year, we're all thinking about the most important things in our lives, our faith, and our family. And my hope is the Justice Department will think very carefully."

The committee’s unprecedented criminal referral holds no official legal weight, and a final determination in whether to pursue the charges will be up to Attorney General Merrick Garland and the Justice Department.

Find the latest updates on this story at FOXNews.com.