NEW YORK - A chastened Michael Avenatti, the brash lawyer who once represented Stormy Daniels in lawsuits against President Donald Trump, was sentenced Thursday to 2 1/2 years in prison for trying to extort up to $25 million from Nike by threatening the company with bad publicity.

Avenatti, 50, rose to prominence by sparring publicly with Trump, but criminal fraud charges on two coasts disrupted his rapid ascent. He was convicted last year of attempted extortion and other charges in connection with his representation of a Los Angeles youth basketball league organizer who was upset that Nike had ended its league sponsorship.

U.S. District Judge Paul G. Gardephe called Avenatti’s conduct "outrageous," saying he "hijacked his client’s claims, and he used those claims to further his own agenda, which was to extort millions of dollars from Nike for himself."

Before the judge spoke, Avenatti delivered emotional remarks. He choked up several times and spoke at times through tears, saying, "I and I alone have destroyed my career, my relationships and my life." 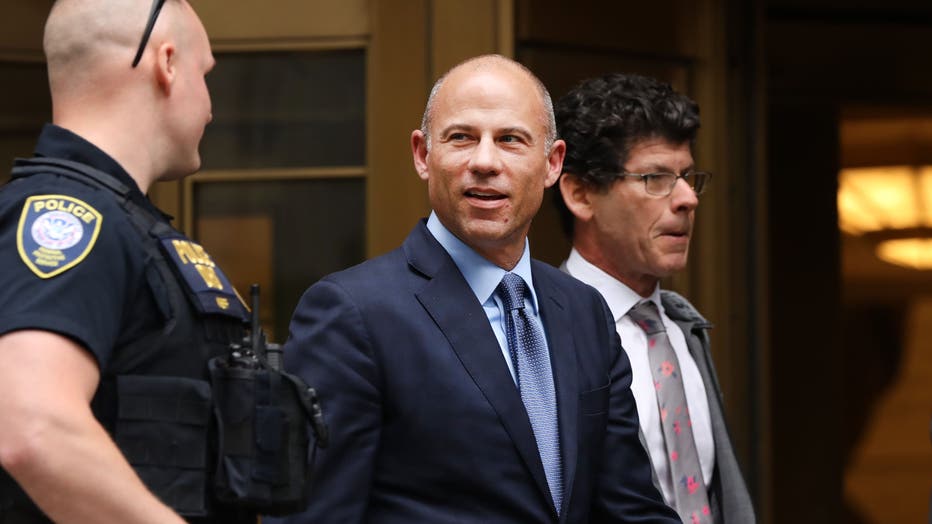 Celebrity attorney Michael Avenatti walks out of a New York court house after pleading not guilty Tuesday in federal court in a case where he is accused of stealing $300,000 from a former client, adult-film actress Stormy Daniels. on May 28, 2019 in

"Your honor, I’ve learned that all the fame, notoriety and money in the world is meaningless. TV and Twitter, your honor, mean nothing," he said.

He ended his statement by saying what he expects of his three children, including two teenage daughters who wrote letters to the judge.

"Every father wants their children to be proud of them. I want mine to be ashamed. Because if they are ashamed, it means their moral compass is exactly where it should be," he said.

As he left the courthouse in the rain with his attorney, he stopped briefly before a set of microphones while his lawyer, Danya Perry, told reporters, "A new Michael Avenatti is deeply humbled as a result of this experience."

Avenatti’s legal woes are far from over. He also faces the start of a fraud trial next week in the Los Angeles area, a second California criminal trial later this year and a separate trial next year in Manhattan, where he is charged with cheating Daniels out of hundreds of thousands of dollars.

Avenatti represented Daniels in 2018 in lawsuits against Trump, appearing often on cable news programs to disparage the Republican president. Avenatti explored running against Trump in 2020, boasting that he would "have no problem raising money." Daniels said a tryst with Trump a decade earlier resulted in her being paid $130,000 by Trump’s personal lawyer in 2016 to stay silent. Trump denied the affair.

Those political aspirations evaporated when prosecutors in California and New York charged Avenatti with fraud in March 2019. California prosecutors said he was enjoying a $200,000-a-month lifestyle while cheating clients out of millions of dollars and failing to pay hundreds of thousands to the Internal Revenue Service.

Charges alleging he cheated Daniels out of proceeds from a book deal followed weeks later. Avenatti pleaded not guilty to all charges.

In written sentencing arguments, prosecutors said Avenatti tried to enrich himself by "weaponizing his public profile" to try to force Nike to submit to his demands.

In a victim-impact statement, Nike’s lawyers said Avenatti did considerable harm to the company by falsely trying to link it to a scandal in which bribes were paid to the families of NBA-bound college basketball players to steer them to powerhouse programs. An employee of Adidas, a Nike competitor, was convicted in that prosecution.

The lawyers said Avenatti threatened to do billions of dollars of damage to Nike and then falsely tweeted that criminal conduct at Nike reached the "highest levels."

Avenatti’s former client, Gary Franklin Jr., said in a statement submitted by prosecutors that Avenatti’s action had "devastated me financially, professionally, and emotionally."

Franklin and representatives of Nike attended the sentencing. An attorney for Franklin released a statement saying that his client was grateful to the court for "honoring the very painful experience he went through at the hands of Michael Avenatti."

In a sentencing memo, Avenatti’s lawyers said their client had suffered enough, citing enormous public shame and a difficult stint in jail last year that ended after lawyers said he was particularly vulnerable to the coronavirus.

"Avenatti’s epic fall and public shaming has played out in front of the entire world. The Court may take judicial notice of this fact, as Avenatti’s cataclysmic fall has been well-documented," the lawyers wrote.

In announcing the sentence, Gardephe noted that "conditions were terrible" at the Manhattan federal lockup where Avenatti spent 100 days behind bars last year, mostly in solitary confinement. He added that it was hard to believe such conditions would occur in the U.S.

He noted that Avenatti had long showed no remorse, contrition or accepted responsibility for his crimes until Thursday, when he expressed "what I believe to be sincere remorse."

The judge said some leniency for Avenatti was deserved because a lawyer who acted with him in negotiations with Nike was not charged despite playing a critical role. He said it would not be justice for Avenatti to face a lengthy prison term when his co-conspirator was not even charged.