LAPD: No overtime pay for officers

Those massive protests in LA meant lots of overtime for LAPD rank and file officers or so they thought.

LOS ANGELES - Los Angeles Police Department officers racked up $40 million in overtime during the recent civil unrest in the city, but won’t be paid for it, and will instead be given comp time, according to a memo sent out by LAPD Chief Michel Moore, which was obtained by FOX 11.

The announcement comes at a time when a growing anti-police movement is sweeping across the country, and L.A. city leaders are planning to slash up to $150 million from LAPD’s budget.

Now, with the release of this memo, multiple sources within LAPD tell FOX 11 that department morale is at “rock bottom."

The memo, sent out to LAPD’s Communications Division by Chief Moore on June 11th, reads:

“I recognize that you have worked tirelessly these past couple weeks during the protests and prior to that during the Safer At Home order.

Your dedication and commitment have not gone unnoticed.

During this extraordinary time, including the full mobilization of our sworn members, the Department has expended more than $40 million dollars in overtime expenses.

This amount far exceeds any budgetary reserve to address unusual occurrences. Therefore, this notice is to advise Department personnel that as of June 7, 2020, pursuant to Memorandum of Understanding 24, Article 6.1D, compensation for overtime shall be in the form of time at the appropriate rate (straight time or time-and-a-half).

Previously, sworn employees could only accrue up to 150 hours of Compensatory Time Off (CTO).

Additionally, all non-essential overtime is canceled.

This includes, but is not limited to overtime related to administrative duties, Cannabis Taskforces, Human Trafficking Taskforces, and Vision Zero Taskforces.

A Bridge Home (ABH) overtime will continue and will be compensated in the form of time.

Metropolitan Transportation Authority (MTA) overtime will continue and be compensated in the form of time, until the Department is reimbursed by MTA.

At that time, employees will have the option to convert the related CTO hours into cash.

Instructions on this process will be published at a later date.

Commanding Officers and Supervisors shall make every effort to ensure that essential over time (i.e., court and extended end of watch) is minimized."

“The officers have lost trust, they were told, cancel days off, cancel vacations, and we will pay you cash overtime, then a memo comes out that they have no more cash. 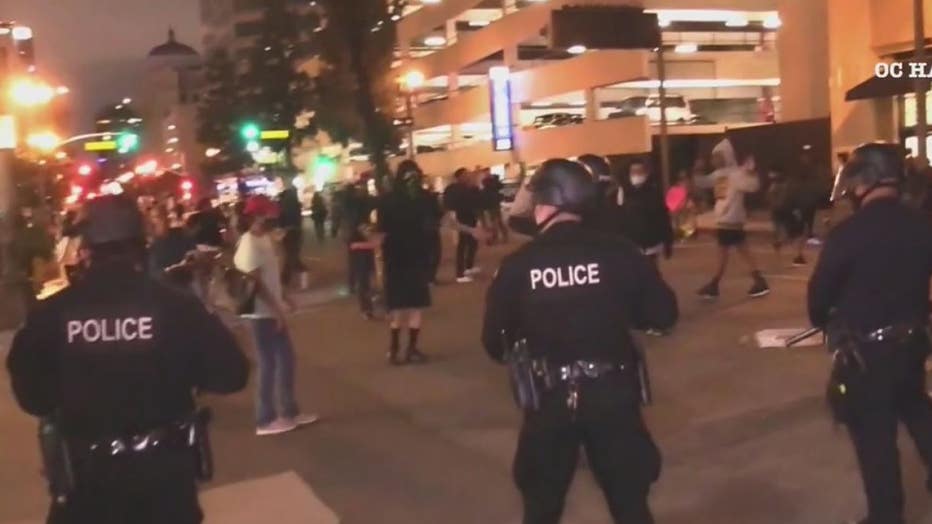 The officers are not happy right now, aside from taking bottles, bricks, I don’t know what else they can handle and now to be told there’s no cash, they’re at their wit's end.”

“It’s rock bottom, very, very low, they’re not robots, they’re human beings and to have city leaders turn their back on them in the midst of a pandemic as well as riots and protests, angry mobs that were attacking them on the front lines when they’re trying to protect life and property, it’s hard for them right now.”

Sgt. Sandoz told FOX 11 the decision to give officers comp time may end up costing the city even more money in the future, as the comp time can be redeemed for cash at retirement, and if an officer has moved up in rank, his comp time becomes more valuable.“

And that’s on top of the $100 million in unfunded LAPD liabilities they city already has from banking overtime in the past,” Sandoz said.

Statement from the LAPD:

"The Los Angeles Police Department offers cash overtime to officers when it is available, and when those allotted amounts are depleted that compensation is offered in time.

The COVID-19 pandemic and full mobilization of the Department depleted that cash reserve before the end of the fiscal year and we transitioned to comp time last week.

Regarding MTA details, consistent with our notice officers will be compensated in time, and when the MTA reimburses the Department the officers’ time compensation will be converted to cash."

Multiple LAPD sources told FOX 11 that LAPD’s Transit Division/MTA services, which is paid via OT, had 43 officers cancel their shifts on Monday, and they are now averaging 12-18 cancellations per shift.

In a phone call with LAPD, a spokesman told FOX 11 that the overtime decision is necessary to get the budget back in check, and that officers will eventually be paid further down the road.