The average price for a gallon of gasoline in the U.S. hit a new record high of $4.104 on Monday, surpassing the previous record of $4.103 set in 2008 according to data from GasBuddy.

New York State's Common Retirement Fund, one of the largest public pension funds in the U.S., is urging McDonald's, PepsiCo and others to consider pausing or ending business operations in Russia amid the country's ongoing invasion of Ukraine.

The fund's trustee, New York State Comptroller Thomas DiNapoli, warned in a series of letters that companies who continue to operate in Russia and invest in Russian assets "face significant and growing legal, compliance, operational, human rights and personnel, and reputational risks."

"Pausing or ending McDonald’s business operations in Russia would address various investment risks associated with the Russian market and play an important role in condemning Russia’s role in fundamentally undermining the international order that is vital to a strong and healthy global economy," DiNapoli wrote in a letter addressed to McDonald's CEO Chris Kempczinski reviewed by FOX Business.

The comptroller's office estimates that the $280 billion fund has about $110.8 million in public equity investments, including direct holdings and co-mingled funds in Russian companies. The New York Common Retirement Fund's stakes in McDonald's and PepsiCo were valued at approximately $410 million and $501 million, respectively, as of the end of 2021, according to its latest 13F filing.

McDonald's has a total of 847 restaurant locations in Russia and 108 locations in Ukraine. The company owns 84% of its Russia locations and 100% of its Ukraine locations. Russia and Ukraine combined represented approximately 2% of the company's system-wide sales, roughly 9% of its revenue and less than 3% of its operating income in 2021.

"Companies like McDonald’s and PepsiCo, which have a large footprint in Russia, need to consider whether doing business in Russia is worth the risk during this extraordinarily volatile time," DiNapoli told FOX Business in a statement. "Russia's unprovoked invasion of Ukraine and its highly unpredictable foreign policy are a threat to the global economy. We're encouraging the companies we invest in to do a risk analysis and determine what is in the best interests of their company and their shareholders." 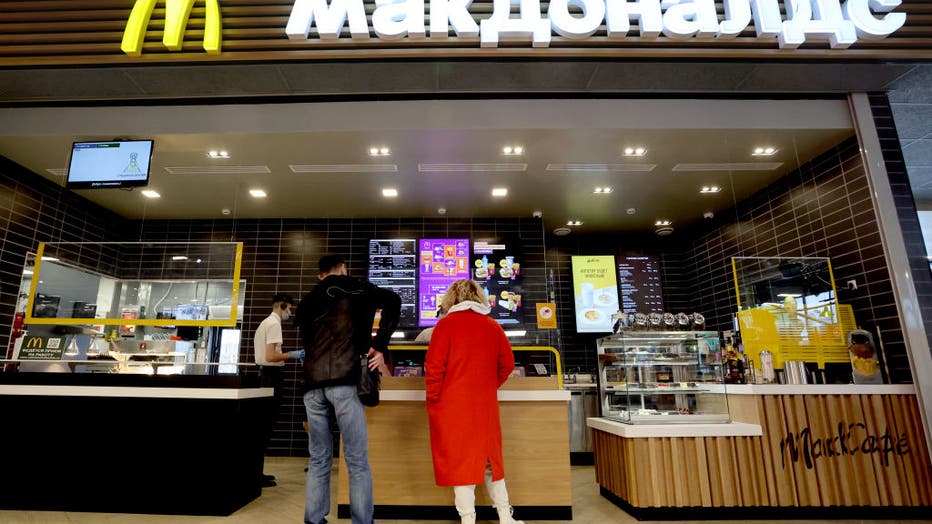 Customers in an in-store McDonalds restaurant in a Pyaterochka supermarket at 9 Volotskoi Lane.  (Photo by Vladimir GerdoTASS via Getty Images)

McDonald's and PepsiCo did not immediately return FOX Business' requests for comment.

In addition to McDonald's and PepsiCo, letters have been sent to Estee Lauder, Mondelez International, Fortinet Inc, Kimberly-Clark Corp., Bunge Limited, Coty Inc., Alnylam Pharmaceuticals and Trimble Inc. A spokesperson for the comptroller's office told FOX Business that it has not heard back from any of the companies as of the time of publication.

"Alnylam does not have operations in Russia and only a very small, immaterial amount of product sales for our life-saving medicine for an ultra-rare genetic condition afflicting pediatric patients come from Russia," the company said in a statement to FOX Business. "These medicines are exempt from sanctions and we plan to continue to provide patients access."

Estee Lauder said in a statement that it has suspended all commercial activity in Russia, including closing every store it owns and operates and halting shipments to the country. Meanwhile, Fortinet has ceased its Russian operations, including the suspension of sales, support and professional services, while Trimble has stopped selling its products and services to Russia and Belarus.