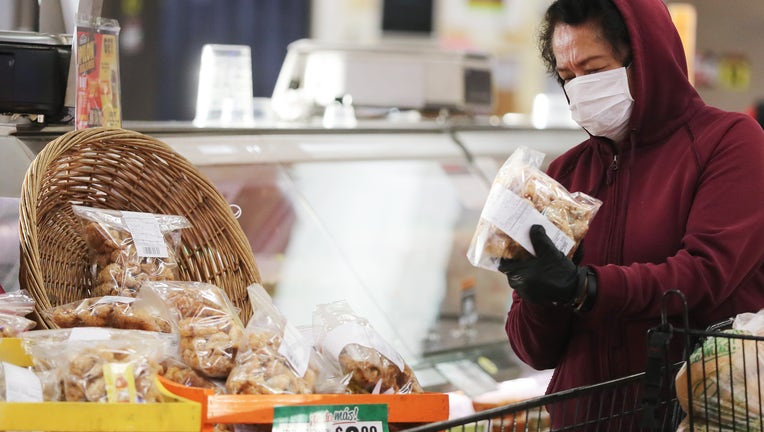 LOS ANGELES, CALIFORNIA - MARCH 19: A senior wears a face mask while shopping for groceries during special hours open to seniors and the disabled only at Northgate Gonzalez Market. (Photo by Mario Tama/Getty Images) (Getty Images)

LOS ANGELES (AP) - For Californians venturing outside, donning a mask will be as common as putting on a cap or sunglasses when the state begins gradually easing stay-at-home orders on Friday. But rules about face coverings vary from county to county, and it’s unclear what enforcement might look like.

Masks have been ubiquitous at essential businesses like grocery stores and medical clinics since the early days of the coronavirus pandemic. On the sidewalks of dense cities like Los Angeles and San Francisco, people have been wearing masks for weeks, giving wide berth to the small number of others whose faces aren’t covered.

Now masks will be required for customers and employees at certain retailers reopening under new guidelines that also include contact-free transactions, Gov. Gavin Newsom announced Thursday.

At Sam’s, a corner store near San Francisco’s City Hall, multiple signs remind patrons to cover their faces, and the clerks have been known to kick out people who don’t do so. Some customers simply lift their T-shirts over their nose and mouth while running in for a quick purchase.

Dannie Holzer said she wears a cloth mask most of the time but took it off while eating her lunch at nearby Alamo Square Park, where she was able to keep the required six feet (1.8 meters) from others.

“I wear it because I respect other people, and I don’t know what immune deficiencies they may have,” Holzer said. She got used to wearing masks because she rides public buses, where they are required, on her way to and from her job at a marijuana dispensary.

Holzer said she gets frustrated when sees people with their faces uncovered inside a store.

“I usually think, ‘I’m doing this for your benefit, so it would be nice if you did the same,’ ” Holzer said.

Health officials in most of the San Francisco Bay Area — including Alameda, Contra Costa, Marin, San Mateo and Sonoma counties — have required residents to wear masks when they leave their homes. After previously only strongly urging facing coverings, officials in nearby Napa County on Thursday said they would mandate them.

“It’s really hard to write someone a ticket when they just lost their job, when they’re living through a time of crisis,” he said. “But if it’s egregious, and you’ve talked to yourself into a ticket, then we have no choice.”

On trails around Los Angeles, county employees will be on hand to make sure hikers are wearing masks and maintaining appropriate distance, officials said.

In Northern California, three counties with few confirmed COVID-19 cases allowed a variety of businesses to reopen earlier this week. Not all shoppers wore masks Wednesday at Yuba Sutter Mall, where about 18 of the roughly 50 stores were open.

Yuba-Sutter Health Officer Dr. Phuong Luu issued a public warning to businesses to make sure their employees and customers were practicing social distancing and wearing face coverings, as required by the local orders.

“I understand that some of your customers may strongly object to a facial covering requirement, but the long-term safety of our community is at stake,” Luu wrote.

The national Centers for Disease Control and Prevention recommends wearing face coverings such as non-medical masks or even T-shirts and bandannas to cover the nose and mouth, because the infection can spread from an asymptomatic person simply by speaking.

“A simple cloth mask is a way to contain respiratory secretions right at the source and not put other people at risk,” the CDC said in an April statement. “The mask traps the droplets before they spread into the environment.”

At the park in San Francisco, Dannie Holzer said while non-mask-wearers frustrate her, she stops short of calling people out. “I can’t be the person who tells people what to do,” she said.

For most people, the new coronavirus causes mild or moderate symptoms, such as fever and cough that clear up in two to three weeks. For some, especially older adults and people with existing health problems, it can cause more severe illness, including pneumonia, and death. The vast majority of people recover.