HESPERIA, Calif. - A man who allegedly attacked two elderly residents with a baseball bat in Hesperia was killed by deputies after what authorities described as a "random act of violence."

The suspect was identified as 42-year-old Mauro Carrillo of Westminster.

The attack happened on Tuesday at about 5:20 p.m. after a resident called 911 to report that a vehicle crashed in front of her home in the 15000 block of Mojave Street.

Authorities said that the driver of the vehicle, an adult male, got out of his car following the crash and chased the woman inside her home.

The suspect armed himself with a baseball bat and the woman hid in another room, deputies said. As the woman spoke with a 911 dispatcher, the suspect allegedly assaulted her elderly mother, who was in the home at the time.

After hearing the crash and calls for help, neighbors came to help the victims. That's when deputies said the suspect turned his attack toward an elderly, male neighbor and assaulted him with the bat.

When deputies arrived at the scene, they made contact with the suspect, who was still armed with the baseball bat, and a deputy-involved shooting occurred.  The suspect was pronounced deceased at the scene.

Two victims of the assault, a 73-year-old woman and a 68-year-old man, were airlifted to a hospital with significant injuries. Their current condition is unknown. 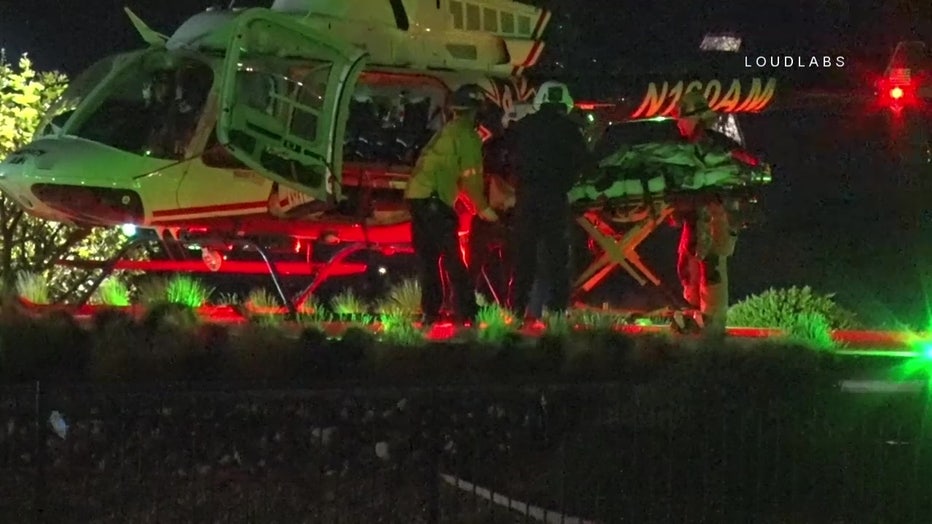 "Detectives determined the suspect is not known to any of the residents of the home and this appears to be a random act of violence," the Hesperia Police Department wrote in a press release.

Anyone with information, or anyone who witnessed the incident, was asked to contact Detective Simon Demuri, Specialized Investigations Division – Homicide Detail at 909-387-3589. Callers can remain anonymous and contact WeTip at 800-78CRIME or www.wetip.com.