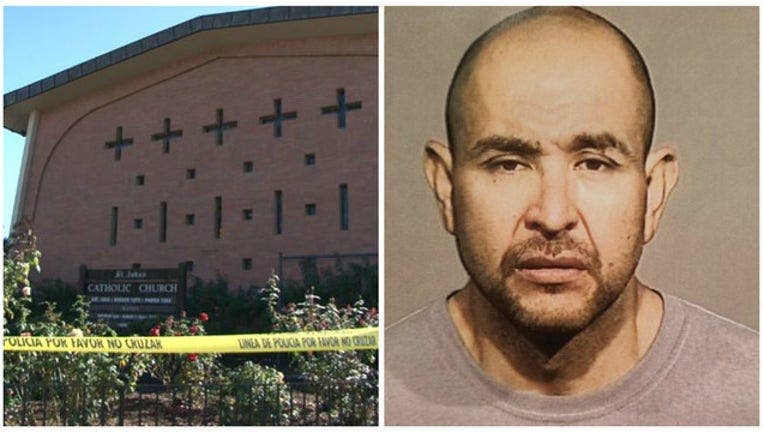 SANTA ROSA, Calif. - A Northern California man was sentenced to 11 years in prison for the 2016 drowning of his 4-year-old daughter in the baptismal pool of a Catholic church.

Gerardo Mendoza, 47, had been smoking methamphetamine for three days and began believing his two youngest children were "being attacked by evil" when he took them to St. John the Baptist Catholic Church in the small California wine country city of Healdsburg on Nov. 20, 2016, authorities have said.

The 11-year sentence issued by a judge Wednesday was predetermined, part of a negotiated plea to manslaughter that Mendoza agreed to as he was facing trial on murder charges, which could have put him in prison for 25 years to life, the Press Democrat reported.

"Certainly, I’m going to give you the maximum allowed by law based on what I read," LaForge said. "There were a couple things that were concerning. Your statement was concerning, minimizing. I want you to know that."

Gerardo Mendoza Ordaz has been formally charged in the death of his 4-year-old daughter, who investigators say was drowned in a church baptismal pool. Cristina Rendon reports.

LaForge was referring to Mendoza's comments to a probation officer, who prepared a presentencing report and recommendation to the court, that he gave his daughter water but never submerged her.

Investigators said Mendoza wanted to find a priest. But after he couldn’t find one, he led his daughter Maria and 9-year-old son into a cross-shaped baptismal pool at least a foot (30 centimeters) deep, court documents show.

He then carried the girl’s body to a nearby police station and stood naked in the station’s back parking lot yelling "help" and "police" in Spanish as he held his fully clothed and soaked daughter, authorities said. His 9-year-old son stood next to him wearing only shorts.

The child was taken to a hospital, where she was pronounced dead.

Facing a potential 25-years-to-life sentence if convicted of drowning his daughter, Mendoza pleaded no contest to voluntary manslaughter. A no-contest plea is not an admission of guilt but is treated as such at sentencing.