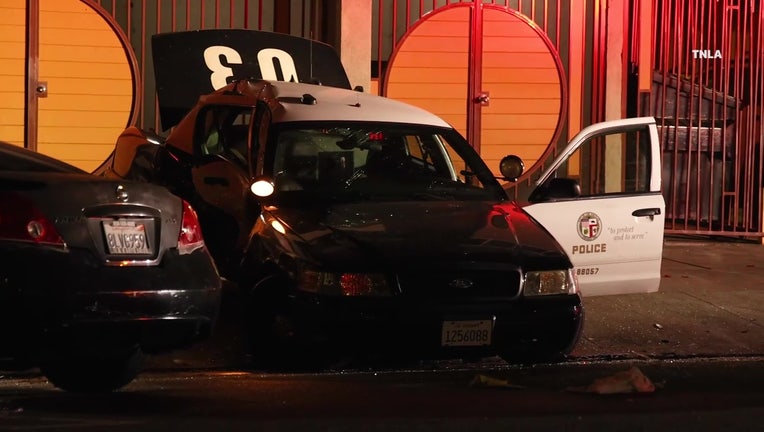 LOS ANGELES - One person has been arrested after allegedly slamming his car into a police car over the weekend, sending two officers to the hospital.

Jose Nicholas Lopez, 21, of Los Angeles, was arrested on one charge of assault with a deadly weapon, after officials said he rammed his car into a Los Angeles Police Department vehicle.

The crash happened around 5 p.m. Sunday in the 3900 block of Hillcrest Avenue in the Baldwin Hills/Crenshaw area of LA. LAPD said officers were responding to a report of a man with a gun, driving onto Hillcrest with their lights and siren on. On Hillcrest, the officers saw a dark Nissan sedan driving toward their vehicle on the wrong side of the road, speeding toward them. After the officer maneuvered his car to get out of the Nissan's way, the Nissan driver allegedly swerved into the police car's passenger's side.

Both officers in the police car were transported to the hospital. One was treated and then released, while the other was admitted for further treatment.

LAPD has not offered any information about why Lopez may have allegedly intentionally hit the officers' car. The department is still investigating. Anyone with information about the incident can contact LAPD at 213-486-6890. Anyone wishing to stay anonymous can submit a tip to CrimeStoppers by calling 1-800-222-8477, or submitting a tip through lacrimestoppers.org.