GILBERT, Ariz. - A funeral was held 2 weeks after a crash in Gilbert that left Pinal County Sheriff Mark Lamb's son, his son's fiancée, and granddaughter dead.

On Dec. 16, crews responded to a two-car crash west of Elliot and Recker Roads shortly after 3:45 p.m.

"A truck was traveling westbound when it struck a red passenger car traveling eastbound as it made a left-hand turn to go north on Cole," read a portion of the statement.

A man and an infant were passengers inside the red car, according to officials. Both were declared dead at the scene.

"It is with heartfelt sadness to report the identity of the 22-year-old male in yesterday's fatal collision on Elliot and Cole to be that of Cooper Lamb, Pinal County Sheriff Mark Lamb's son, and his infant grandchild— both passengers of the vehicle," police said.

The female driver of the car – Cooper's fiancée and mother of the child, Caroline Patton, – was hospitalized in life-threatening condition. Sheriff Lamb announced on Dec. 24 that she died from her injuries.

The driver of the truck, identified as 21-year-old Brian Torres, was not injured but was arrested for DUI. The investigation into the crash remains ongoing and lab analysis of Torres' blood is pending.

A fundraiser has been set up for the family. There is also a GoFundMe. 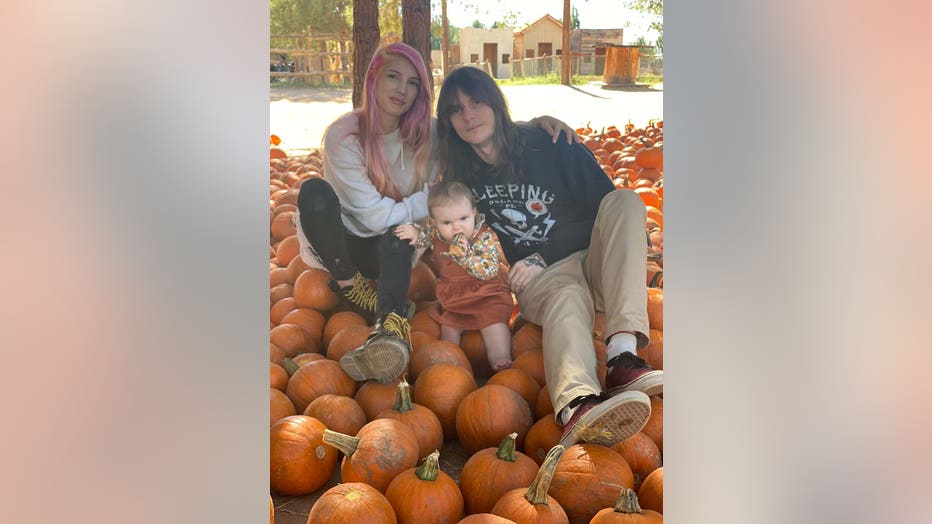 Funeral held for the victims

A funeral service for the victims was held on Dec. 30 at the LDS Stake Center, located at 31844 N. Gantzel Road, in San Tan Valley.

"We are just grateful for all the outpouring of love and support," Sheriff Lamb remarked. "Obviously this is a tough tragic situation … loss of your son, grandchild. Caroline was like a daughter to us as well, so it’s tough."

Of course, the last couple of weeks have been difficult, but they’re pushing forward for the sake of their other four kids.

"I would also like to send my deepest thanks and gratitude to the community in Gilbert that worked on our kids and helped them and were there with them when they had their accident. That means more to me as a mom to know that you were there for them," Janel Lamb said, the sheriff's wife and mother of Cooper.

Christmas came and went without the young family.

"Our children live with us. So their toys are with us, two-thirds of the Christmas presents under the tree were theirs. We had to clean their room out, so it has not been easy," Sheriff Lamb said. "We are not angry. This is an accident. Our son went through something similar. We don’t feel any anger or resentment. We want to let you know we forgive you, and we know that our kids are in a better place."

Lamb said his son’s short life wasn’t easy as he struggled with addiction, but was proud of his recent recovery. For now, they’re focusing on the time they had.

"Nobody's guaranteed a minute in this life, so every minute that we have is cherished even more now," the sheriff said.

As police investigate what happened, people living in the area say they're in disbelief.

"There was a lot of people surrounded crying, and just don’t want to experience that again," said Jason Vaught, who was working from home at the time of the crash.

Jason described what he witnessed as he was sitting in his office near the front of his home.

"I heard a big huge screech. Probably lasted for a second, and then something just crashed. Felt like it was something that dropped in our upstairs attic. Walked outside and I saw the cars, and they were along right next to the tree," Jason recounted.

Jason said his neighbor ran over to help and tried to perform CPR on the infant until paramedics arrived.

"She was there and she was devastated doing the CPR," said Jason. "The other one, I found out, was I think the boyfriend of the driver, and they said when they got there, that he had a light pulse and then no longer, and the baby, I don’t think ever had a pulse."

Neighbors say the roadway is like a racetrack. People are often speeding, and it can get very congested during school hours. There were already two crashes here in recent days: one a few days ago, and one on the morning on Dec. 16.

"It’s so surreal. I can’t believe that it’s happening right outside. You hear it on the news, but this happened right across the street. We have three kids, and one of them just got her permit, and I do not want any of them driving. It’s just -- especially I’ve never experienced anything like this. Even though I was across the road, but seeing the bodies pull out and seeing them doing the chest compressions and then, eventually, the sheet over it, just hits home."

A day later, a memorial grew at the site of the crash – flowers, stuffed animals, candles.

Funeral services were held on Dec. 30 in San Tan Valley after Cooper Lamb, his fiancée Caroline Patton, and the couple's newborn daughter, Elaine, all died in a crash in Gilbert. Police say 21-year-old Brian Torres was driving a pickup truck and crashed into the couple's car. Torres was arrested and is accused of DUI.

Police have identified a suspected drunk driver in connection to a crash in Gilbert that left Pinal County Sheriff Mark Lamb's son and granddaughter dead.

The crash, which happened in an area west of Elliot and Recker Roads, has left area residents in shock. FOX 10's Stephanie Bennett reports.