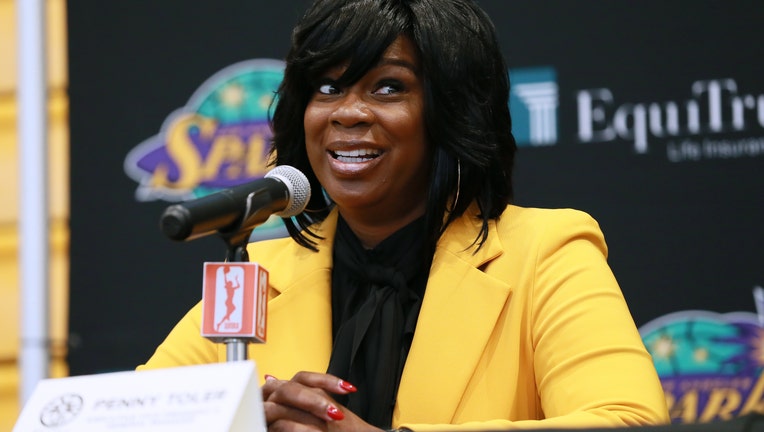 LOS ANGELES (FOX 11) - General Manger and Executive Vice President Penny Toler has been relieved of her duties from the Los Angeles Sparks. The team made the announcement Friday afternoon.

The firing followed a report that she delivered a heated locker room speech to the team last month that included the use of the N-word.

“On behalf of ownership and the entire Sparks organization, I'd like to thank Penny Toler for a successful and historic tenure with the
organization,'' Sparks Managing Partner and Governor Eric Holoman said in a statement. “Penny is a foundational figure in the growth of the WNBA and helped lead our franchise to perennial playoff success and multiple titles. We wish her nothing but the best moving forward.''

The team noted that during Toler's tenure, the Sparks won three WNBA titles and made the playoffs 18 times. She also was also a player for the Sparks, noted for scoring the first basket in WNBA history.

The team's statement did not mention a report by ESPN this week that Toler delivered a fiery speech to the team following Game 2 of the WNBA semifinals, and used the N-word on multiple occasions.

Toler did not deny using the word, but told ESPN she never directed it at the players.

“By no means did I call my players the N-word,'' Toler told ESPN. “I'm not saying that I couldn't have used it in a context. But it wasn't
directed at any of my players. It's unfortunate I used that word. I shouldn't. Nobody should. ... But you know, like I said, I'm not here to defend word by word by word what I said. I know some of the words that I'm being accused of are embellished. Did I give a speech that I hoped would get our team going? Yes.

“I think that this whole conversation has been taken out of context because when we lose, emotions are running high and, unfortunately and obviously, some people feel some type of way.''

The team says a national search will begin immediately to find the next general manager. As of now Managing Partner and Governor Eric Holoman will step in the interim.