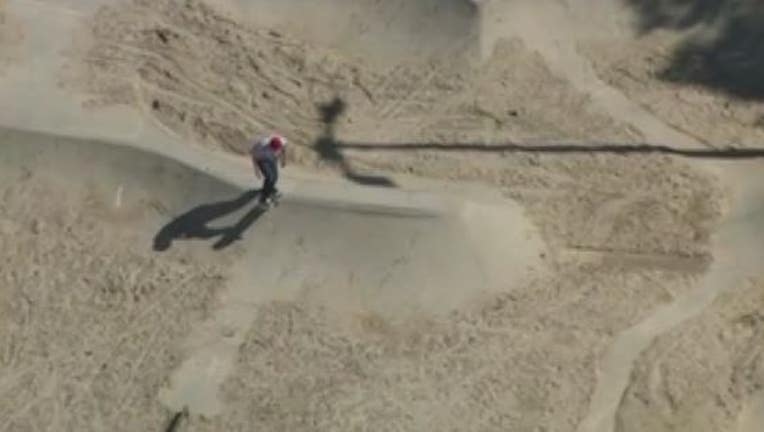 LOS ANGELES - The Venice Skate Park looks more like a giant sandbox Friday than a series of concrete knolls that boarders are itching to ride.

Los Angeles Department of Parks and Recreation crews poured sand into the skate park on Thursday to deter large gatherings of people during the Safer at Home Orders.

"We've had continuous violators ... and we want them to stop," Rose Watson, a spokesperson for RAP, told City News Service. "We want them to follow the orders because the skate parks are closed until further notice. It's for the health and wellness of all L.A. residents."

Los Angeles city parks have been all but closed since mid-March due to the coronavirus pandemic, and Mayor Eric Garcetti even temporarily closed the open-space, grassy areas of the parks on Easter Sunday.

Among the closures are sports and recreation facilities, including golf courses, park trails, tennis courts, skate parks and more.

Watson said RAP has filled skate parks with sand in the past in order to keep people from using them before construction has been completed.

She said so far, just the skate park in Venice has been laden with sand, but RAP will fill other skateboard facilities if people are seen gathering during the Safer at Home orders.

"We're doing this for our safety, their safety and the safety of others," Watson said. "When this is all over, trust me, we will open them, but right now it's important for them to not use the skate parks."

San Clemente in South Orange County dumped sand all over its only public skate park earlier this week to also deter large gatherings.