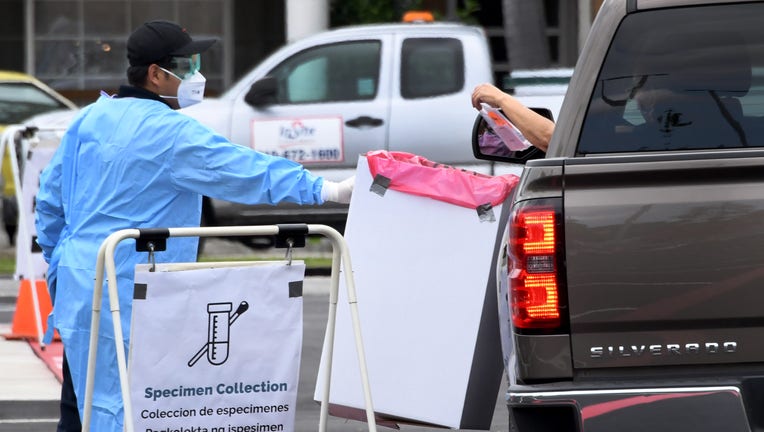 LONG BEACH, CA - APRIL 18: A person drops their test kit into a bin as Long Beach has two new drive-thru testing sites for the Coronavirus including Jordan High School as the area has been disproportionately impacted by the virus in Long Beach on Sat

The website now features an interactive data dashboard that provides the public with information regarding positive cases, hospitalizations, demographic breakdowns and more. The city says it will allow the public to see more granular data than previously released and now provides city comparisons
among other jurisdictions. The dashboard is updated as new information comes
in, to provide the most up-to-date information available.

"We need to be transparent and release as much data and information to the public as possible,'' said Long Beach Mayor Robert Garcia. "Our new dashboard and website give the public real-time information about the COVID19 crisis.''

The redesigned website features content located in a more intuitive interface with simplified text and image-based graphics. Information has been curated specifically for the general public, businesses, health care providers and those who serve high-risk populations, according to a statement from the
city.

The site also includes commonly accessed content such as COVID-19 symptoms and prevention, and information about the Long Beach City Health Officer's Orders, along with daily case counts and updates. Testing information and appointment scheduling is also featured for the five testing locations
within the city, the statement said.

Long Beach has had 449 positive test results, including 48 people who are hospitalized and 232 cases in which people have recovered.

A Long Beach Police Department officer, currently assigned to the Investigations Bureau, tested positive for COVID-19 and is in stable condition and recovering at home in self-isolation.

The officer is the department's second to test positive. The city says it is only publicly reporting the case numbers associated with Long Beach first responders and employees on the front lines of this pandemic who have daily, significant interactions with community members. Cases involving other
city employees are not publicly reported.

Meanwhile, 122 positive cases have been confirmed at seven of the city's long-term care facilities, which includes sites with active cases, cleared cases and fatalities. These cases include both facility residents and staff members (who may not be Long Beach residents).

There has been a total of 21 fatalities, and all had underlying health conditions. Of those fatalities, 16 are associated with long-term care facilities.