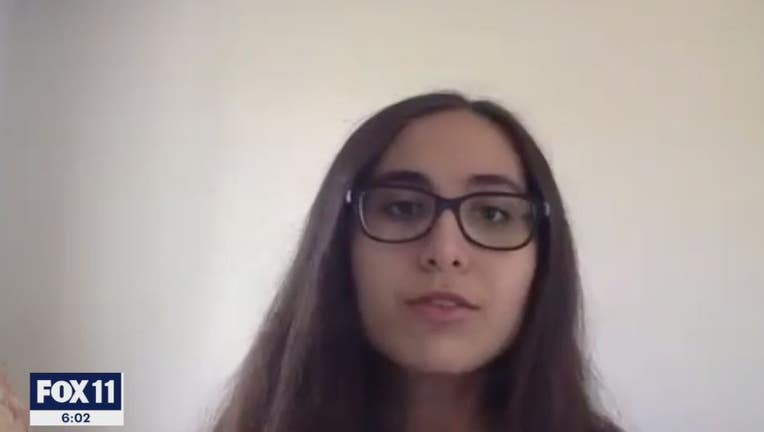 LOS ANGELES - The Black Lives Matter protests across the country and in SoCal include hundreds of young people advocating for change.

Recent protests in Culver City and San Francisco drew thousands of people and were organized by students.

Now, Sasha Ronaghi, 17, has launched a virtual book club for young people interested in learning about issues impacting the black community. The club is called the "Anti-Racism Education Project."

"I thought like 15 people would join, and now we have about 420 which is kind of crazy, and we're doing a lot of projects as well," said Ronaghi.

Ronaghi recently graduated from Sage Hill School in Newport Beach. She will be attending Columbia University in the fall to study engineering, but said she wants to learn more about racism, and help others educate themselves too.

"I kind of wanted a way to keep myself accountable and I wanted a way to make it approachable. We welcome people of all education levels and you're just here to learn.  We're all kind of just coming out of high school or in high school and the things that we're seeing in front of us in our real life are happening in our history books as well. We have the opportunity to learn about history. All we're seeing is history repeat itself and I think we have a unique opportunity to change that if we continue the conversation," said Ronaghi.

Ronaghi said she now organizes the book club with 90 other people. The members are from a dozen different countries, and more than 30 states in the U.S.

"It wasn't possible to have everybody awake at one time so now we have meetings at two times in the day just to cover all of our time zones," said Ronaghi.

Ronaghi said the group holds four meetings per month. The meetings are on Wednesdays at 6 p.m. PT, and Sundays at 11 a.m. PT. The next meeting will be June 24.

"Every month, we give people one book, one movie, one article, one podcast, whatever different types of media formats we have going on that are all related to a certain theme," she said.

The theme for June and July is "how to be actively anti-racist." The group is translating information into other languages for members who don't speak English, and are also crowd-sourcing to help provide resources to members who want to join, but don't have reliable access to books, Netflix or Hulu.

"I think especially as young people, we might not have the financial resources but we have other resources that we want to use together," Ronaghi said.

Ronaghi is Iranian, and believes it's important for people of all races to come together to speak about racism, and anti-blackness.

"If one person is oppressed, we're all oppressed so it's all about helping each other. Every time there is an advancement for one minority group, it means that there can also be advancement for another minority group. It creates precedence, and so we all have an incentive to try to help with the cause. I think that as a non-black person of color, the issues affecting the black community to some extent affect all people of color, but at the moment, they're the most extreme and harsh in the black community compared to other people of color communities."

She said the book club currently focuses on learning about racism towards black people.

"I'm very much making this about let's learn about anti-blackness and how we can amplify black voices and how we can raise awareness on issues in black communities," she said.

Ronaghi encourages anyone willing to learn to join the club for free.