Chicago health officials: "Lollapalooza was not a super-spreader event"

Chicago health officials say there have been 203 cases connected to the Lollapalooza music festival. The four day event drew nearly 400,000 people. Officials say the news in not unexpected, as patrons had to either be vaccinated or show proof of a negative COVID test.

LOS ANGELES - Live Nation Entertainment will require all artists and fans to either show proof of COVID-19 vaccination or a negative test starting Oct. 4 at all of the company’s venues and festivals in the U.S., the company said.

"Vaccines are going to be your ticket back to shows, and as of October 4th we will be following the model we developed for Lollapalooza and requiring this for artists, fans and employees at Live Nation venues and festivals everywhere possible in the US," said Michael Rapino, president and CEO of Live Nation.

The global entertainment company, which promotes, operates and manages ticket sales for live entertainment, said the rules will go into effect "where permitted by law." The company said it has also developed "best practices" for artists to request such policies at third-party venues.

Additionally, all Live Nation employees will be required to have received the COVID-19 vaccine by Oct. 4 in order to visit any of the company’s events, venues or offices. 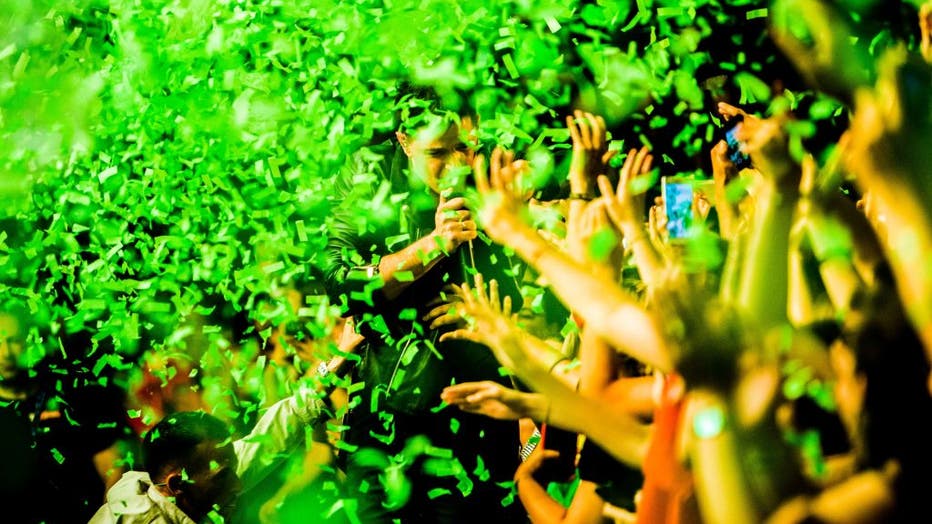 FILE - A band plays for fans at Mediolanum Forum of Assago on June 10, 2018, in Milan, Italy. (Photo by Mairo Cinquetti/NurPhoto via Getty Images)

Live entertainment company AEG Presents similarly announced last week that it will require proof of vaccination for entry into its owned and operated clubs, theatres and festivals nationwide by Oct. 1. In the meantime, AEG will also implement a policy of showing proof of vaccination or a negative COVID test taken within 72 hours of the event.

"We have come to the conclusion that, as a market leader, it was up to us to take a real stand on vaccination status,'' said Jay Marciano, chairman and CEO of AEG Presents.

The requirements come as the highly contagious delta variant has fueled a sharp uptick of new virus cases and hospitalizations in the United States.

Dr. Francis Collins, the director of the National Institutes of Health, on Sunday pleaded anew for unvaccinated people to get their shots, calling them "sitting ducks" for the delta strain that is showing little sign of letting up.

While the U.S. currently is seeing an average of about 129,000 new infections a day — a 700% increase from the beginning of July — that number could jump in the next couple weeks to 200,000, a level not seen since among the pandemic’s worst days in January and February, Collins said.

Both he and Dr. Anthony Fauci stressed that the best way to stem the virus is for the unvaccinated to get their shots.

Currently, about 60% of the U.S. population has gotten at least one dose and nearly 51% are fully vaccinated, according to the Centers for Disease Control and Prevention. Areas with low vaccination rates have been particularly hit hard with infections, such as Louisiana, Texas, Florida and Mississippi.